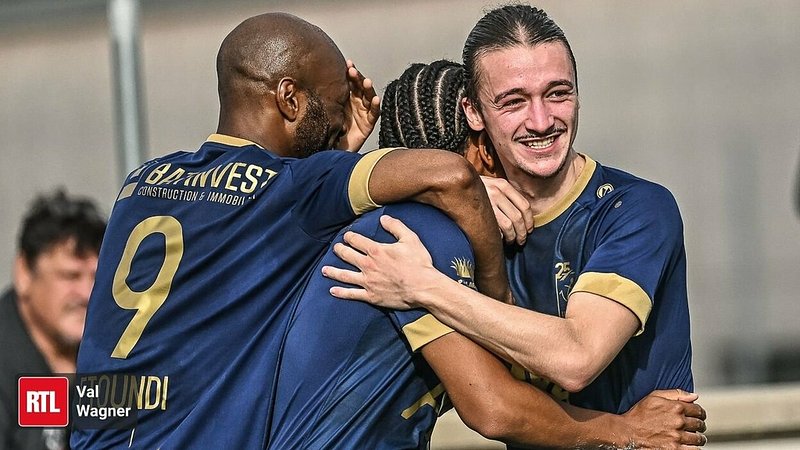 One third of the season is now completed, and while the title race has already basically narrowed down to two teams, there is a lot of questions regarding almost every position below them. Short recap of last week’s actions here.

The clash between Differdange and UN Käerjéng promised to be one to watch, for a number of reasons. The two teams arrived to Stade Municipal with contrasting fortunes as FCD had just been taken over by their former player Stéphane Léoni to try and turn the mess around, meanwhile, UNK had been enjoying a steady start to the campaign after promotion from the Ehrenpromotioun last year, building on a solid foundation while making clever moves in the transfer window as well.

Having not lost a game against a team below them on the table, the away fans had reasons to be excited for. In reality, though, the game started pretty worringly for Käerjéng. Ambrosio Simȏes crossed the ball towards Érick de Castro in the third minute, and although the striker did manage to score, it was later called off for offside.

Differdange continued to dominate, and although they struggled to create chances themselves sometimes, they clearly seemed to be in control. That was until they gifted UNK with an open goal and a through ball to Stefan Lopes only a few yards out. A misunderstanding in communication led to neither Guillaume Cappa nor Gianluca Bei moved to make a clearance from a cross behind the defence, which was smartly exploited by Lopes, who put his team ahead in what was a bit of a surprise given the lack of attacks from UNK’s side in the 33 minutes before the goal.

The only relevant event before half-time was a straight red card for Käerjéng midfielder Trésor Mossi for a dangerous challenge. Differdange were clearly showing encouraging signs in their first game of the Léoni era, but the end product was missing. Perhaps that’s why last season’s most prolific FCD player Bertino Cabral was brought on for the second half, in an attempt to give the team that extra sharpness they had been missing in attack.

Eventually, it didn’t take too long before Differdange equalised: in the 60th minute, Érick de Castro reached onto a second ball from a tricky angle, and finished the chance with an eye-catching acrobatic move. From there onwards, it felt as though the game had restarted and we’re witnessing the first half once again: plenty of chances for the home side with disappointing outcomes, before Käerjéng suddenly get a golden chance to take the lead. This time it was Dylan Lempereur who brought down Valerio Barbaro inside the penalty area, and the decision was obvious. Congolese attacker Christivi

Junior Liseki stood up to take the spot kick, and converted with ease. Käerjéng’s two substitutes put their team ahead with not much time to spare.

The last ten minutes were especially intense, with five yellow cards being handed out (one to UNK manager Marc Thomé). Most of the 875 fans stayed in their seats until the final whistle because the flow of the game made the outcome as unpredictable as possible. And those wishing for late drama got their way, as there was indeed one last twist in the game. Differdange created one last chance well into stoppage time, and although Joé Frising heroically parried the first attempt away, it bounced once again Érick de Castro, who didn’t miss.

The draw won’t satisfy Differdange who still can’t escape mid-table with this result. At Käerjéng, fans and players alike must feel disappointed for letting the win out of their hands after the chances they’ve been given, but they still maintain their record of going unbeaten against everyone below them on the table.

Player of the Weekend #10

Two strikers provided their teams with much-needed doubles, scoring at the best possible moments to gain momentum back for their teams.

Érick de Castro’s efforts were detailed above, but it’s worth noting that the Angolan striker has scored five and assisted two in his seven appearances for his club since arriving in the summer. Such a promising start was one of the reasons why last year’s success Bertino Cabral has started finding himself on the fringes of the team lately.

Seeing Rayan Philippe’s name on the scoreboard can hardly come as a surprise to anyone, as Hesper’s young French striker is still the most prolific player across the whole continent in 2022/23 so far. He boosted his stats with another 2 goals against Mondercange last week, but this time his goals were actually crucial: he opened the scoring early on, and then did well to get the three points for his team with a last-gasp decider against an FCM side that did superbly to soak up the pressure and fight for the draw. Philippe is leading the scoring charts by two goals at the moment, with Samir Hadji (hat-trick against Mondorf last time out) and Mondercange’s El Hassane M’Barki (who also scored on Sunday) the biggest threats to his position.

However much there was a goal fest in some of the games (Mondorf 0-7 Dudelange being the first to spring to mind), there wasn’t any exceptionally beautiful hits this time. Mayron de Almeida’s precise composed effort from roughly 18 yards out against Strassen was worth three points for Niedercorn, and it was a nice enough hit to be nominated this week.

De Castro’s acrobatic scissor kick-type shot was another honourable mention in this category, but from such close range, scoring was the bare minimum expectation from the striker.

Storyline of the Weekend #10

33% into the season is probably about the right time to start looking at the table in search of an actually relevant picture, and there are some interesting conclusions, indeed.

A battle for the first place between F91 Dudelange and Swift Hesper was to be expected well before the season got underway, but the sheer extent of their dominance is frightening and came as a complete surprise to me. Over the 20 combined matches, they dropped a combined 2 points (Hesper drew with Union Titus Pétange early on). F91 Dudelange started the season in a historically great form, collecting the maximum 30 points from the opening 10 matches. Such a record is usually enough to cruise to a league title but Hesper are breathing down their necks in this case, keeping the pressure on F91 who thus have to win each and every game to stay on top. The two top clubs meet on

6 November, in the next matchday. The question as to whose unbeaten streak will continue for the longest sounds fascinating enough to keep us on our toes for the time being.