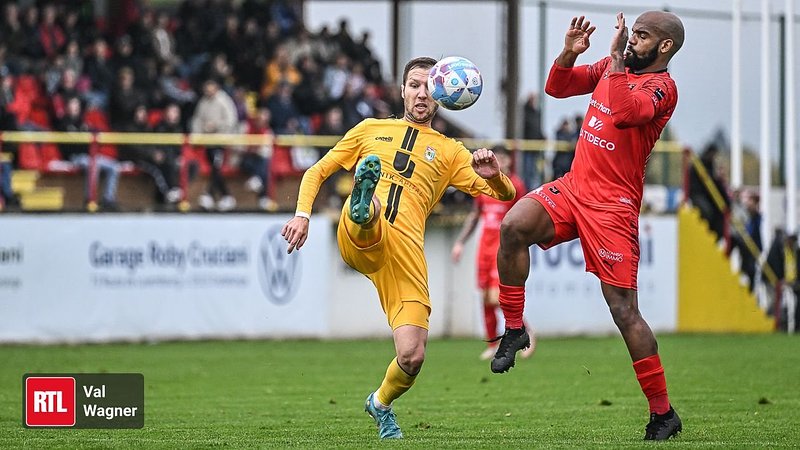 After a one-week break, we are back with the overviews of each matchday of the national first division!

There is plenty to talk about after some teams, after the table was wildly shaken up – apart from the top two, who still seem to be a level above their competition...

Game of the Weekend #9

FC Differdange arrived into their 9th game of the season having only narrowly lost to powerhouses Swift Hesper in the previous round. Dudelange proved to be at least as much of a challenge, even though they’ve scored less goals so far than Stolz and co. have.

Dudelange’s 8-game winning streak to kick the season off is already incredible but they are expected to have more and more watching eyes on their results and games from the public who are curious and eager to see how long the unbeaten streak could start before one team proves strong enough to upset their apple cart. Although Differdange were sitting in the relatively lowly sixth place with only 11 points to their name from 8 games, recent form suggested they might just be the team who end F91’s flawless dominance.

The game started with locals Dudelange taking up a strongly dominant attacking role, while Differdange did their best to make their opponents’ task harder in attacking build-ups, often pressing high and thus leaving themselves exposed at the back at times. The pressing didn’t prove totally effective though, because while the game was relatively flat and low on goalscoring opportunities, all of the few chances came from F91.

The first goal came on 22 minutes, and it was well-deserved: Filip Bojić’s free kick found its way to Guillaume Cappa’s net, after a deflection on Differdange defender Juan Bedouret. The scoreline summed up the state of play well, as the home side did deserve the narrow lead. Until the closing minutes of the first half, Dudelange were way better and only later did their defence have a few slightly dangerous chances to deal with. The first half ended 1-0 though, after FCD didn’t prove clinical enough in front of goal.

The second half started just as well, if not even better, for the Diddelengers, after Bojić soon made it a brace for himself from a unique curveball from the left side of the box. The shot was practically impossible to reach for Cappa.

The goal was vital for Dudelange in the end though, as the response to the second goal arrived after only 3 minutes: Dylan Lempereur launched a cross from the left and it found Joao Ambrosio Simoes’ run, who put the ball in the net from practically his first touch of the ball after having been subbed on a minute earlier. The young forward generally brought much-needed liveliness to his team’s game after the substitution, creating chances and trying to make runs in behind Dudelange’s watertight defence.

As we neared the end of the game, Differdange tried harder and harder to carve out chances but came up short as they struggled to break down one of the best-organised backlines of the division.

The game was ultimately decided in stoppage time, when substitute Herman Moussaki applied the last touches to an essential win for F91, tapping Edis Agović’s through ball to a wide empty net.

Differdange cannot be disappointed with their overall display, although the result arguably could have been even better had they been able to be more courageous in the first half an hour or so. Meanwhile, the home fanbase can feel relieved after their club managed to overcome one of their toughest competitors on paper. 27 points from 9 games feels like living the dream at Stade Jos Nosbaum at the moment.

Update: FC Differdange 03 have since announced the departure of head coach Pedro Resende after the game. The club have endured an altogether slow start to the season, and have won only three of their eleven games so far in 2022/23, with their highest point undeniably being the 6-0 win against Fola Esch.

Player of the Weekend #9

This time instead of focusing on one of the regular ‘big guns’, we can highlight one of the unsung heroes of the season so far. Struggling Victoria Rosport were able to finally get their first win of the campaign at home against Etzella Ettelbrück, and attacking midfielder Yan Bouché played an absolutely instrumental role in the success.

Bouché spent the last season in the Danish second division with now-defunct Jammerbugt (who signed a whole batch of Luxembourgers for the last full season of their existence), and barely got playing time. His return to his homeland was in the hope of building himself up to be ready to play at a higher level again – and it’s going reasonably good so far. In a Rosport side making frustrating defensive mistakes that deprive them from points on the regular lately, Bouché has been one of the rare positive points when talking about the team’s season. This weekend, his product was scoring the goal that put his team ahead at 1-1, and then providing the assist for Dylan Spruds’ header with an inch-perfect corner.

Goal of the Weekend #9

Alexis Larriѐre surely needed plenty of luck – and a mistake from Strassen goalkeeper Koray Özcan – for his goal to open the scoring at the Stade de la Frontiѐre. The midfielder crossed the ball from a free kick well outside the box from a sharp angle on the right, although no one was able to get on the end of it inside the area. The ball flew past all defenders, and eventually, a shocked Özcan who was too late in his attempt to try and fix his mistake. Eventually, Jeunesse Esch won 2-0 and were able to get a but further away from Strassen on the table.

Storyline of the Weekend #9

Fola Esch are frequently the topic of this column, for easily understandable reasons. The struggles of last season’s second-placed giants continue, with another loss this weekend, to newly-promoted Käerjéng.

This game was the first under new president Paul Olk at the club. After this loss, they are now sitting in the last position of BGL Ligue, after winning the competition as recently as 2020/21.