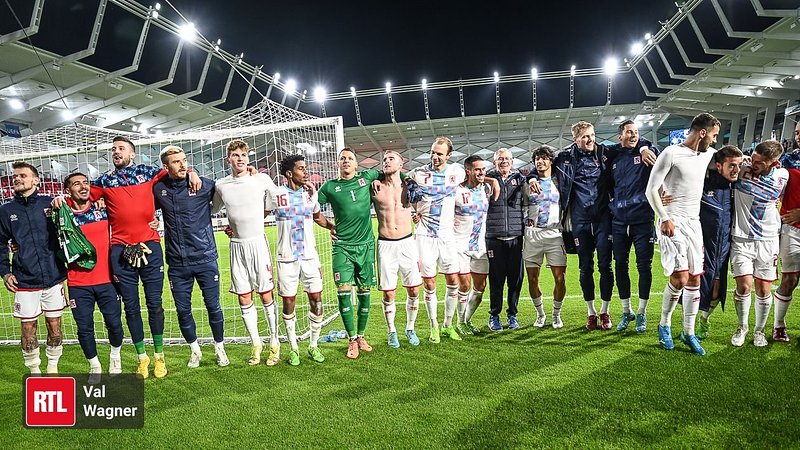 Luxembourg recorded their highest points tally in the Nations League since the beginning of the competition, only missing out on promotion by two points to standout favourites Turkey.

The six games (and especially the last two) showed a lot of promise in this rapidly improving team, however, there are some aspects where that little extra accuracy lacked and thus prevented us from moving up to first place.

One of the main developments from previous Nations League seasons that we see is a little more courage towards attacking formations, and attacking football in general. For the first time in decades (if not forever), the squad proves strong enough in quality and depth to be able to play a smart, but attractive style of play, in contrast to the gritty defending and ultra-direct build-ups of old. This team has enough smooth passers and the players in the most important defensive positions are adept at resisting the opponent’s press, building up in a neat and composed way as a team.

As it always is, such a change of direction towards a bolder approach does result in the occasional slip-ups and resulting goals every now and then. Maxime Chanot’s sub-par performance against Turkey last week was just another example of a defender putting a foot wrong and damaging the team’s chances in the game heavily in the process. These individual mistakes, especially from defenders, are always costly but they cannot be completely cut out from any club’s or country’s game, as we have seen from much more experienced and renowned centre-backs.

Off to a good start

The 2022/23 Nations League campaign kicked off only three months ago with a 0-2 win in Lithuania for Luxembourg, and there have been some absolute revelations in the team during the two international breaks together. Although Luc Holtz only gave debuts to two players during the competition (Sofiane Ikene in the 2-2 draw against the Faroe Islands; Diogo Pimentel in the 1-0 win at home over Lithuania), some others have cemented their status as national team regulars. Yvandro Borges Sanches, who might well be the most talented youngster currently at Holtz’s disposal, is now a mainstay in the starting eleven, despite mostly playing at reserve or youth level for Borussia Mönchengladbach.

Christopher Martins’ injury-caused absence created another slight concern for the team before the final two games of the group stage, but it turned out to be a minor blessing in disguise, as Sébastien Thill played probably his best games at international level since making his debut. Due to the defensive quality Martins and Leandro Barreiro possess, Thill was often overlooked for the starting eleven, and only counted upon as an attacking midfielder, or at times, even a right wing-back. This was the perfect opportunity for the Hansa Rostock playmaker to show his true qualities in a familiar position and he duly delivered.

Manager Holtz clearly has a wealth of options in attacking positions he hadn’t been able to experience since he took over the country’s national team back in 2010. With such a lot of interesting profiles all across the front line, one could easily forgive him for playing Yvandro, Gerson Rodrigues, Danel Sinani and Vincent Thill in the same starting eleven against Turkey. Florian Bohnert and Timothé Rupil could also help the team massively from the bench in that game, and it was Bohnert who gave a magnificent assist for Gerson Rodrigues’ third goal in the Nations League campaign, and Luxembourg’s third goal in that game.

Turkey's unfortunate late equaliser in the September fixture once again emphasised the fact that this team cannot always hold on and withstand increasing pressure from superior sides towards the games’ latter stages. After the late disappointment in Istanbul though, it felt surprising but nevertheless encouraging to see the Red Lions prevail at home in the last game, thanks to a goal scored minutes away from the end. Gerson Rodrigues’ fine shot was vital to help Luxembourg achieve the best result among every second-placed team in Division C, thus securing a play-off spot for EURO 2024 in case any of Turkey, Greece, Georgia or Kazakhstan qualify for the tournament via their standard qualifying group.

Huge developments in quality of football

Luxembourgish football has come an incredibly long way in the past decades to get to the point where we can realistically talk about our chances of qualifying to Division B of the Nations League, and above all, a major international tournament in the near future could be in sight.

This is the result of consistent improvements and developments at academy and infrastructural level across the country by the FLF, as well as a consistent approach within the national team by the longest-serving European international manager, Luc Holtz, whose player selection rules are clear and fair, and where players who keep performing for the country are given full faith, in the same way Holtz is treated by the FA. This consistency and belief in the current method, the manager, his staff and the playing squad is the main reason that took our national team to a level we might never have seen before. And this is what needs to be continued in the future as well, if we are to continue on the path to a European Championship or a World Cup in a decade or so.

The fact such plans don’t sound as foolish and incredibly unrealistic anymore as they did 10 or 15 years ago might just be the best and clearest indicator of exactly how much we have achieved lately and how much potential still lays in this young and creative team for years to come.

“Golden era” is a phrase to be applied carefully in any context, but when talking about such a small country with a relatively small football heritage and not many results and achievements to show for, maybe it’s at least somewhat understandable if fans are anticipating to see something the country has never experienced so far.