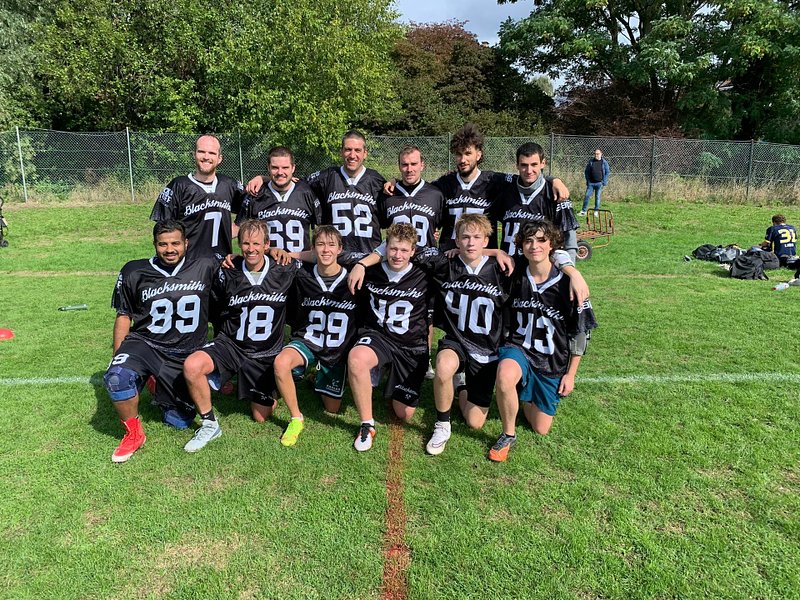 The latest competitive entry of next generation players promises a bright future for the Luxembourg Blacksmiths lacrosse team.

The Luxembourg Blacksmiths entered their new season after their promotion into the second division of the Belgian Lacrosse Federation competitions against regional juggernaut Ghent Goblins. The first division team frequently competes in the Belgian play-offs and welcomed the Luxembourgish side in Braine near Brussels.

The Blacksmiths fielded a healthy mix of experience and younger players, including Lycée Guillaume Kroll final year student Gil Batting in goal and three new players: #40 Alex von Bommel and #90 Nathan Kliver in midfield and #48 Alex Wortmann in defense. They were accompanied by another U18 player #20 Montgomery ‘Monty’ Gérin who had already competed during last year’s successful promotion campaign into the second division.

The team also sported a number of welcome returns, Luxembourg international and World Cup alumni #18 Yves Audrimont joined the team while on visit from Switzerland and defender #89 Nirav Haria after injury.

The opposition fielded a number of Belgium international players with several tournaments’ experience under their belt – the main objective for Luxembourg was to compete well across all quarters and apply past lessons in a new, more competitive context.

Ghent had by then adjusted their offensive mechanics to the Luxembourg zone defense, cleverly capitalizing on off-ball movement. This effectively closed the game, taking the Ghent lead to 12-2 before the Luxembourg attacker and president Bingen found the net again shortly before half time and 12-3 lead for the Ghoblins.

The Luxembourg off season preparation could have been longer, but the team remained determined to make the most out of the experience. Ghent, having displayed offensive efficiency Luxembourg was struggling to keep up with at times, now faced an improved team defense (and fewer incentive to score with ten goal lead).

Luxembourg conceded after half time to a final score of 19-5, having proven against a heavy favourite that for spells a team with in spots virtually without experience can compete. President Bingen, having led Luxembourg in points after his role as the team top scorer in the last season, commented: “The whole team, including the new players, fought until the last quarter. We never looked at the scoreboard but at the next play and can be happy with our performance.” First scorer Coelho commented “We were quite organised, especially the new guys showed they learned well. Big thanks to the ref crew for a well run match”.

Head coach Henning Schmidt, unavailable due to family commitments, commented: ”This scoreline against that team with that many youngsters on board shows we belong here. Of course we would have loved to see a few more goals for us and fewer for them – yet, it’s attitude that determines success and we definitely brought that.”

Luxembourg Lacrosse have their next game on 2 October against French team Lille Seagulls.

Lacrosse has been in Luxembourg since 2016 and you can play it, too. For more details, see Join the Team - Luxembourg Lacrosse.