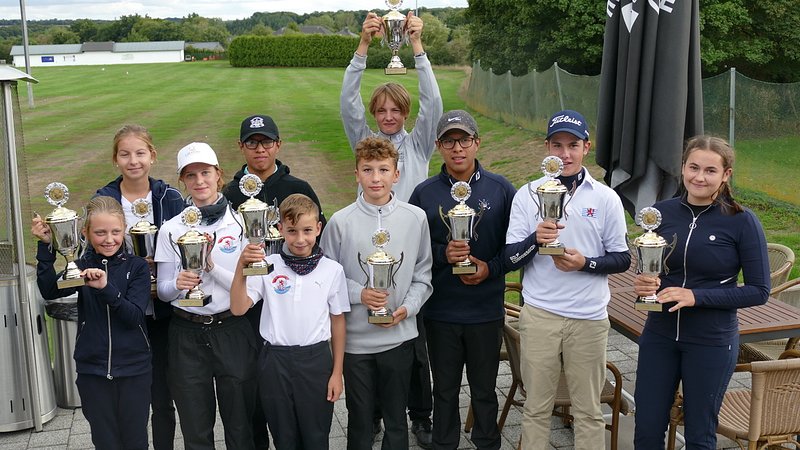 The enthusiasm of 18 young golfers gave life to the Junior Championship this past weekend, as they competed over 36 holes for the National title. They came ready to play as they were almost at the closing of season 2022.

After the first day of the competition, you could only see faces full of disappointment and frustration. These young players full of skills needed patience and good luck to battle the Christnach Golf Course as it was not in a condition to host the Junior National. The bad weather conditions added to the course difficulty as players faced gusty winds of above 50 kph during the two days they competed. These conditions came together to bring the lowest attendance to this championship in the last 5 years.

By the second day children came back again with more strength to finish the last round and to the rewards ceremony.

Nicolas Winandy from the oldest age category took the top of the leader board since day one and managed to stay there for the second day, leaving Stefan Rojas, defending champion, as runner up and Andrew Rojas in third place. “He is not only a very good and persistent young golfer, but also one of the kindest young men I have ever met. I remember him from a younger age, playing golf and caddying for his dad, he has come a long way with effort and perseverance to become the junior champion, very well done” said one of the parents attending.

On the girls’ side, Lisa Steingrube led also since the first day of the competition, maintaining her position and finishing first followed by Emma Lahaije as runner up and Natalie Tapella in third. Natalie travelled all the way from the South of France to be present for her last junior competition.

In the end, the Luxembourgish Golf Federation (FLG) rewarded the effort and perseverance of the children who were happy to finish, as more than a half of the attendees received a nice trophy, bringing a nice smile to their faces.

Overall results and prizes per categories this year:

No girls participating at this age category.

Congratulations to all young players attending this event, even though not all returned with a trophy, they were all winners just for the fact of being present. Hopefully the FLG finds a way to encourage golf in the new generations to come not only among nationals but also at the federal level where golfers representing the other half of the population could add more presence and healthy competition to the sport.