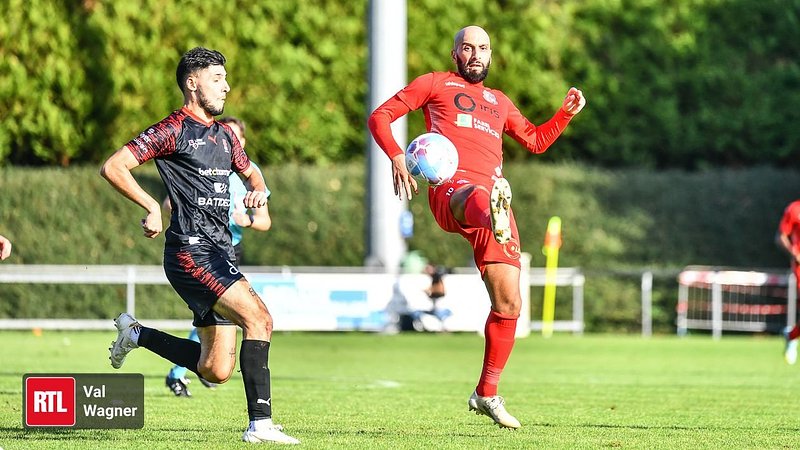 F91 Dudelange and Swift Hesper are dominating the league by a crazy extent already, and it seems like these two teams are the only ones not capable of slipping up at the moment.

The rest of the teams offer unpredictable results in tight games on the other hand, which makes for perfect entertainment every week!

Match of the Weekend #6

Picking a 0-0 as the game of the week might seem an odd choice, but this one made for a fascinating watch, especially the second half. Both teams arrived to this game with high expectations and in great form, after Mondercange were sitting in third place, while Differdange had just beaten a disorganised Fola Esch side 6-0 the week before.

The opening stages already provided us with an interesting tactical battle. Mondercange, who usually play with flair and creativity, creating plenty of chances, didn’t really get a chance to do so this time. From the starting whistle, Differdange applied an aggressive high press in the opponents’ half, successfully preventing the home side from playing out from the back the way they usually do. FCM really didn’t stand a chance in the majority of the first half, as they couldn’t find the solution against Differdange’s suffocating press. The away team had chance after chance early on, but their wasteful finishing meant the clubs had to leave the pitch at half-time with 0-0 on the scoreline.

The second half is when things changed for the better for Mondercange, who started the second 45 in a much livelier way, exploiting Differdange’s off-the-ball mistakes and creating gaps in their defence with the ball to get in goalscoring opportunities. As we neared the end, both teams took more risks and went on the counter-attack more, to the extent it started to resemble a game of table tennis.

After 86 minutes, Differdange defender Kévin D’Anzico received a red card which changed the game’s state slightly. FCD was more reluctant to launch attacks in the last few minutes, but they almost conceded in stoppage time, when Mondercange substitute Alessandro Alunni missed one of the biggest chances of the game, to deny his team a late win and keep it 0-0.

Overall, Differdange dominated through most of the game and they had eclipsed FCM both in quantity and quality of their chances, but it was a slow day at the office for the attackers who couldn’t make their advantage count. Mondercange managed to keep third place on the table after the draw, while Differdange are now down to 8th, just about staying in the top half.

Player of the Weekend #6

Rayan Philippe has long deserved some praise for his outstanding start to the season, scoring 7 times and assisting a further 9 goals in only 6 games! This places him on top of the assist charts across every

European top flight at the moment, above the likes of Lionel Messi and Neymar Jr, who also had a great start so far themselves! Although Philippe arguably has an easier job than the aforementioned two world-class attackers, his two-goal display against Etzella Ettelbrück was once again sensational. His free-kick goal was one of the best among all games this week, so I would definitely recommend watching it!

Goal of the Weekend #6

Luca Napoleone’s cracker against Hostert, without a doubt. Wiltz got a free kick 42 minutes in, already leading 1-0. About 30 yards out, it was Luigi Vaccaro stepping up to take it. He laid it off to Napoleone, whose rocket whistled straight into the top corner, while goalkeeper Ewert’s diving efforts proved useless. Wiltz eventually won the crucial game 3-2, partly thanks to this real screamer.

Storyline of the Weekend #6

A little summary of some outstanding individual efforts in comparison to other countries: El Hassan M’Barki ranks joint third in the scoring charts for all European top flights (summer leagues excluded), tied with PSG’s Neymar Jr, among others. Rayan Philippe’s assist stats have been mentioned already, but Mario Pokar of Racing Union Luxembourg ranks highly on that list too, as he’s joint fourth, above Ajax’s Dušan Tadić for example. If we compare the leagues of the other names on the list with ours, the difference is clear for all to see of course, but it’s nevertheless encouraging to see players from Luxembourg in such illustrious company, however early it is in the season