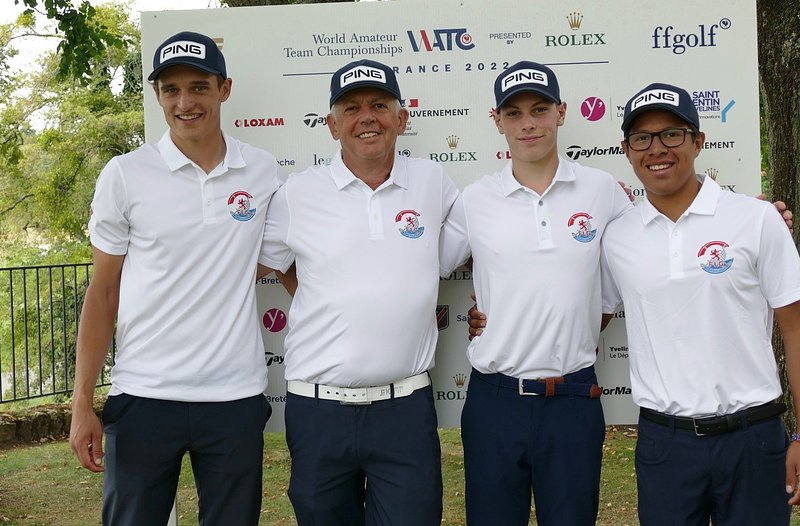 The best of the golf amateur world was witnessed by spectators around the world from August 31 to September 3 at the challenging courses of Le Golf National and Saint-Nom-La Bretèche in Paris.

Four rounds plus two practice days in a stroke play format waited for the players as they headed to the marvellous and demanding golf courses, to take only the two best scores of each team every day to add up for their final score at the end of the championship.

71 countries put together their best three players to bring their teams to compete for the Eisenhower Trophy in hands of Denmark since 2018, last time the event took place. Charles Weis (21) Stefan Rojas (17) and Lenny Mines (16) joined efforts to bring together the best of their abilities to earn a good spot on the leaderboard as the national team representing Luxembourg. The team was lucky to be joined by team Captain Marc Schmit who worked for the team above and beyond, coach Harry Goerke from the FLG and coach Charles E. Stiefvater “We felt really happy and honoured to be selected to play for Luxembourg and we came to try more than our best every day” said Stefan Rojas.

The competition was ferocious, top ranked players at the WAGR ™, joint their national teams to become a proof of strength and ability along the competition. Unfortunately for Luxembourg, after the second practice round it fell short of one player as Mines got sick leaving the team with one less score to lean on for two days of the tournament. “This added more pressure on the other players, because you know you can’t count on a third score, even if you do not feel the pressure, it’s in your mind, I think Charles and Stefan did very well managing it,” said Marc Schmit.

The Japanese jumped ahead of the pack with a first day mark at -14 to follow through with a second day of -8, setting a record for 36 holes scoring at the WATC, by the third day the leaderboard went wild again as the teams battle for the top. Sweden came out of 18 hole with a surprising best score of the day at -14, not enough to secure the gold medal earned at the end by the Italians with a total of -31 strokes, silver for Sweden by one stroke at -30 and bronze for the US at -27.

Luxembourg performed well, combining Weis leading score of +5 and Rojas at +17, finished 47th on the leaderboard with +22 strokes, a good position earned by the team who finished 55th in 2018. “It was tough because we missed one player, we had added pressure, with no score to scratch so Stefan and I had to play well, but in the end we did it, it’s not the best we could’ve done, but our score was good and solid along the four days, and we enjoyed playing.” Said Charles Weis and Lenny Mines added ”It was very good that Stefan and Charles played very well and now I feel recovered and ready to play.”

Number one world amateur Keita Nakajima from Japan received special mention during the closing ceremony as the only one two years in a row top WAGR ™ player. This incredible accomplishment was not reached before for any player since the creation of the ranking in 2007. Swedish Tobias Jonsson was also recognised as the best individual score during the event at -17 strokes during the four days.

“Congratulations to the team, it was a lot of work, I saw a lot of very good shots, some unlucky ones, I saw these young players with a lot of technique and long drivers, they have everything they need for their future.” said Marc Schmit. Participation on this world championship sure will motivate even more several golfers in Luxembourg to improve and be part of this event in the future.