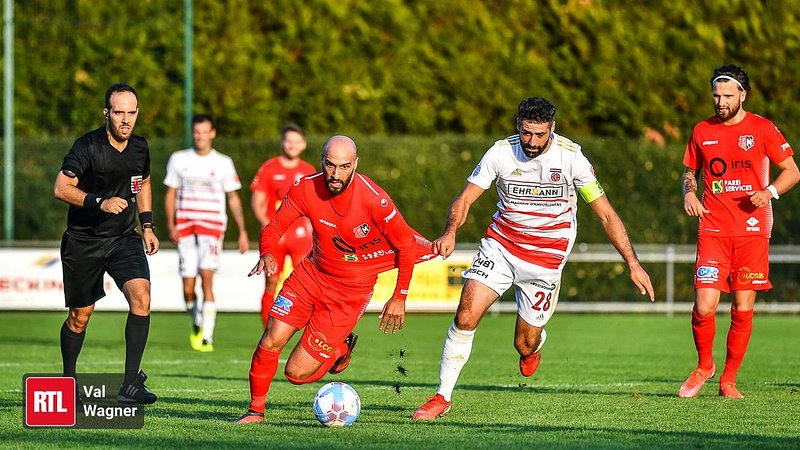 On a matchday where both main contenders swept their opponents away with ease, there was still room for surprise results, of which Mondercange’s third win of the season arguably stands out

In case you missed out on the games this week, we have you covered in our weekly review below:

Match of the Weekend #4

What makes the 2022/23 season so special so far is that the big games never disappoint. Racing FCUL hosting Dudelange promised to be the marquee game of the week, and as always, it delivered. I doubt F91 need any detailed introduction to their form and their chances of winning the title come the end of the season, but RFCUL looked like a side that could give their defence some unexpected problems if their high press was executed sufficiently.

The game kicked off in the most entertaining fashion as fans could celebrate a combined three goals in the first 18 minutes. Kévin N’Goma opened the scoring from a harmless-looking half-chance, receiving a short pass from Jérȏme Simon’s corner, before taking a sharp turn - fooling two defenders in the process – and launching a rocket into the short corner from a narrow angle. Dudelange had the perfect response to that, Samir Hadji’s 25-yard banger matching N’Goma’s hit in the brilliance of its execution but also in its importance for his team. Eventually, F91 took the lead after the otherwise well-performing Romain Ruffier conceded the second goal from outside the box, this one scored by Dejvid Sinani. RFCUL could feel somewhat unlucky to have fallen behind, but the game continued to be a fascinating contest with frequent goalscoring chances from both sides. Eventually though, F91 managed to keep their advantage until half-time.

The second half was surprisingly a lot more one-sided, as Dudelange’s superiority came out visibly, and it didn’t take long before the guests scored their third for the day. It was Sinani’s time to shine again, and he completed his brace from a nice through ball from Filip Bojić. João Magno skipped over the pass, catching Racing’s defenders off-guard, and leaving Sinani in a clear goalscoring position on the far side. Only six minutes later, Magno’s unselfish gesture was returned by Sinani, who put the Brazilian through on goal, who lobbed the goalkeeper incisively. With RFCUL now 3 goals behind, the contest was soon over and the real question was how many more F91 could score before the final whistle. Ruffier’s efforts guaranteed the answer to that question was going to be zero, although there was one last chance on the other end: after a corner, Aldin Skenderović misjudged the situation and ended up committing a foul on Edvin Muratović, who scored against his previous team from the consequent spot kick.

After a disappointing second half, Racing fans are left to feel lucky the scoreline didn’t end up even worse for them. On the other hand, Dudelange are taking the hardest tests with ease on domestic level, and it does look like Hesper are the only team capable of giving them a real challenge.

Player of the Weekend #4

Dejvid Sinani’s two goals and one assist warrant him a place here ahead of other high performers. The midfielder went toe to toe with Dominik Stolz on the scoring charts last year, in addition to ranking high in the number of assists given in 2021/22. It looks like he’s continuing right from where he left off this year, so we’re most likely in for another exciting season from the 29-year old.

Goal of the Weekend #4

Overhead kick alert! Demba Seck scored Jeunesse Esch’s first and only goal against Wiltz on Sunday that was worth 3 points! The execution was top tier too, controlling a long ball forward with his chest before throwing the overhead kick, which landed in the net! All goals can be rewatched via rtl.lu’s Live Arena feature.

Storyline of the Weekend #4

Daniel da Mota struggled to contain his emotions against his previous club Differdange! Right after his team Etzella conceded the second of the day, the veteran attacker made two fouls in two minutes to get himself sent off on a second yellow card. Both incidents seemingly screamed frustration and pettiness, and were obvious yellow card fouls. The score remained 2-0 and Etzella’s key player will be left to think about his actions next week.