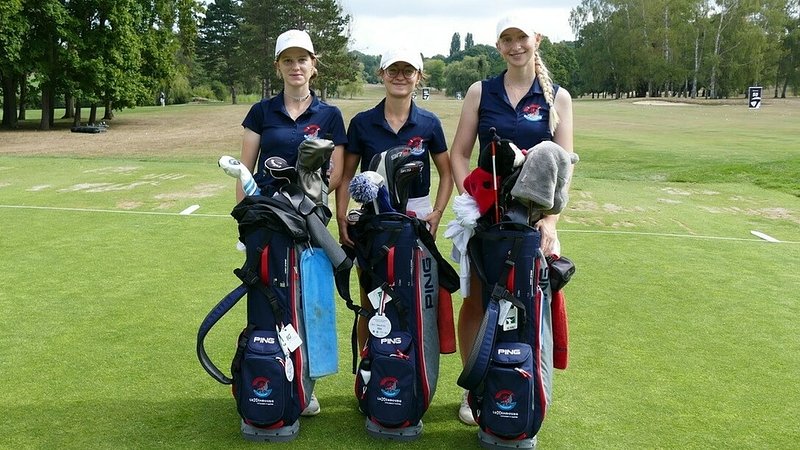 The splendid and difficult Golf Courses of Le Golf National and St Nom-La Bretèche in Paris welcomed this past week 60 national teams from all over the world representing their countries including Luxembourg, to play the best ladies amateur tournament in the world, the WATC.

From August 25 to August 28 the best players fiercely competed for the Espirito Santo Trophy in an environment full of suspense, disappointment, joy, tears, and great sportsmanship. The format, stroke play over 72 holes played by three team members, counting each day the best two scores to add up for the team score. Players would have to face the two courses two times to make the event even more challenging.

Three Luxembourgish ladies, Marie Baertz (19), Marie Binninger (23) and Lisa Steingrube(18) qualified to represent  the Grand Duchy,  “It is a great honor for us to make it to the National team representing our country, and this is the first time for our ladies team attending this tournament, we are very happy for this opportunity,” said Marie Binninger. The team was supported all the way by team capitan Rick Mohr  from the FLG and Coach Douglas McLean.

The teams were giving surprises on the score board every day, one day one team knocked down the leader on the previous day, nothing was for sure. At the end a missing putt from the world top ranked amateur Rose Zhang left an astonished audience and the US team with a bogey as the runner up handing over the Trophy and gold medals to Sweden with a tied score at an incredible -13 strokes. The bittersweet silver medals were decided by the tournament ruling, the tiebreaker score was the one from the non-counting third player on her last round. Germany and Japan tied for the bronze medals with -12 strokes after the Japanese surprised the public with the best score on the last day at 138 strokes.

The Luxembourgish team came in 53rd place with +96 strokes, the three ladies played tirelessly, but the score did not show their skills and effort. “We could’ve done better but at least each one of us was able to contribute to the general team score. I hit the ball well, but my scores didn’t reflect it. I am not happy with my performance, regardless, I am for the nice experience we had, the team spirit was great, and I enjoyed the international environment with good, nice, and kind players.” Said Marie Baertz.

The first-place individual was recognized with a special mention during the closing ceremony. On a tremendous tied of -7 strokes between Swedish Meja Ortengren, American Rose Zhang ( two of the favorite players) and German Helen Briem, this amazing amateur ladies closed the tournament  giving a taste on what is coming in 2023 before heading home.

The experience gained playing at the highest level in the world will carry  players and federations for their future projects. With a positive attitude looking forward, Lisa Steingrube said, “Even when our team did not play as we wanted, I am not upset, because we put a lot of effort on these beautiful long courses and in the end is the experience that counts. We want to come back ready to compete after we train harder.”