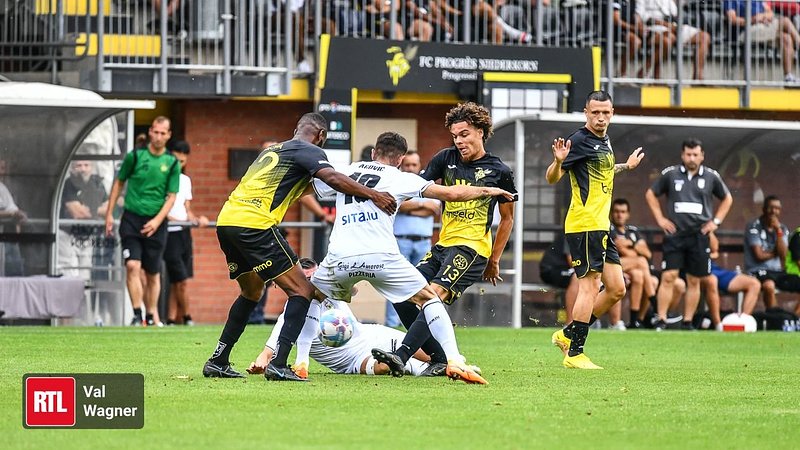 27 goals in 8 matches give us an average goal count of over 3 per game in Matchday 2, and some of those goals were dramatic last-minute deciders or the difference between the two clubs at a derby.

Five teams are on a perfect record so far, and in our weekly review we will take a look at them and the others, too.

Match of the Weekend #2

Progrѐs Niederkorn's draw for this season’s fixtures start with two of the toughest challenges right away, facing title contenders Hesper and Dudelange. Jeff Strasser’s team now has 0 points from 2 games, but it would be unfair to say they didn’t give up a fight last weekend. The game at Stade Jos Haupert started a bit slowly as both teams opted for a more cautious structure in the beginning. The breakthrough came after 20 minutes, when Niederkorn's young French acquisition, Elias Filet found the net. F91 upped their game and soon came the equaliser from a corner, headed in by defender Jules Diouf. Both teams got livelier and had fairly dangerous chances but the scoreline didn’t change again until half-time.

Unfortunately for the home side, the second half wasn’t quite as exciting, as Dudelange’s striker duo, Samir Hadji and João Magno set up two quick goals for each other to basically seal the game. They didn’t lean back afterwards either, creating more chances and asserting their dominance at a stage where a Progrѐs comeback seemed increasingly unlikely, especially after Dejvid Sinani was brought on by F91. With 85 minutes on the clock, things slightly changed, as F91 defender Chris Stumpf received his second yellow card. This provided Niederkorn with a lats glimpse of hope which they did cling onto, as Filet scored his second goal of the day to pull one back. The stoppage time wasn’t enough time to equalise though, which means that the difference between the two powerhouses grew to six points already.

Player of the Weekend #2

Gautier Bernardelli, Strassen captain, definitely had an interesting game against Differdange. From 1-1, he fired his team towards victory thanks via two converted penalties, but in stoppage time the defender also found his own net. Luckily for him, Strassen still won, and he was instrumental in achieving triumph.

Goal of the Weekend #2

Wiltz were already 2-1 up against Rosport on Sunday, but Benjamin Romeyns put the cherry on top in the 88th minute with a beautifully curved effort from more than 20 yards out to hit the top right corner, without giving the goalkeeper enough time to intervene. Outstanding technique from the Belgian.

Storyline of the Weekend #2

Differdange threw away their lead and ended the game with nothing last week, just like what happened in Matchday 1 against Racing Union, which can become a worrying trend. Giving away two obvious penalties in either half is unacceptable. The team did well for themselves in Europe, where they slightly surpassed expectations by drawing with Slovenian opponents Olimpija Ljubljana twice to take the tie to extra time. Their form in the league has been a huge disappointment so far, in comparison.

Meanwhile, Fola are on the opposite path, grinding out the narrowest of wins against Strassen and Union Titus Pétange, both times coming from behind. This time, the Esch-sur-Alzette team were helped by a 90th-minute penalty that Michael Omosanya calmly converted for the three points. Their summer business looked a bit worrying from the outside, especially in terms of squad depth, but it looks like we shouldn’t be worried about them just yet.