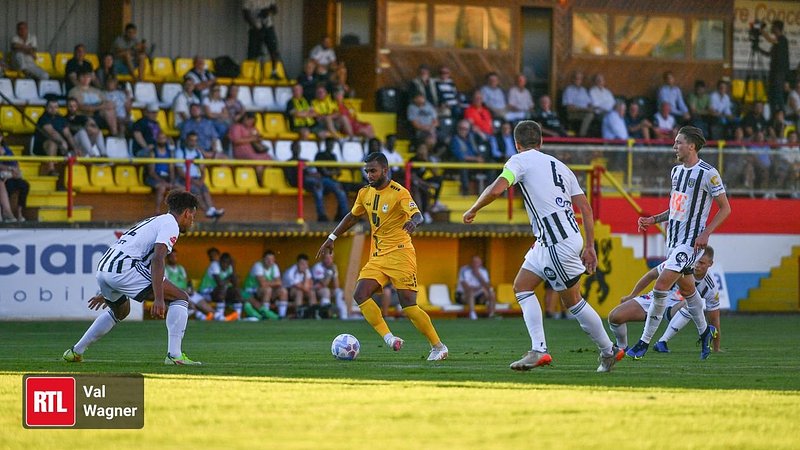 The league has kicked off last weekend with two new teams, fresh squads and ambitions for all the clubs, and now this series is underway, too! In our weekly reviews for 2022/23, we will look at a number of outstanding events over the matchdays, broken down into categories.

Match of the Weekend #1

Hesper hosting Niedercorn right on the opening gameweek was always going to be a fascinating encounter as two teams with title (or at least podium) aspirations faced each other. The match lived up to the hype as the scoring was opened early by Clément Couturier after a huge error by Niedercorn goalkeeper Sebastien Flauss. By the 21st minute, the score was already 1-1: Belmin Muratović spotted Bilal Hend with an indirect free kick, and their cheeky routine caused confusion among Hesper’s defence, which was well exploited by the attacker. At half-time, the draw seemed fair between two evenly matched teams. The second half was opened by another goal though, as Niedercorn turned the game around and took the lead thanks to a fine finish from Mayron de Almeida. The game was far from over here, as Hesper tried increasing the pressure and dominating the game, but their chance creation wasn’t the best for most of the game. That changed in the 75th minute, when Dominik Stolz made a through ball in Rayan Philippe’s way behind the defence, who unleashed a shot at the top near corner with incredible power. The trick was repeated 3 minutes later, with the only difference being that it was Stolz crossing the ball and Philippe heading it in this time. As if it wasn’t enough for Niedercorn, Flauss proceeded to make an even more embarrassing mistake than at the start of the game, basically assisting Ken Corral on an open goal to put the final nail in the Progrѐs coffin.

Player of the Weekend #1

El Hassane M’Barki, 35, has spent his entire career in the French regional leagues before signing for Mondercange in January 2021. Now, in his first BGL Ligue game, he recorded a hat-trick, taking advantage of every bit of disorganisation in the Rosport defence, and helping his team return to the top flight in style.

Goal of the Weekend #1

The score was already 3-0 for Dudelange in the first half against Jeunesse on Monday, but Mehdi Kirch put the cherry on top with a thunderous shot right to the top corner after the ball was headed out by Jeunesse defenders succeeding a corner kick.

Storyline of the Weekend #1

FC Mondercange returned to the BGL Ligue after a 13-year old hiatus, but they made up for their absence, scoring five times right in their first game upon returning! The Stade Communal de Mondercange crowd could already celebrate three goals in the first half, and the team only conceded from a soft penalty. This start is really encouraging for the red-and-blacks who now have a vital three points against direct rivals in the bag.