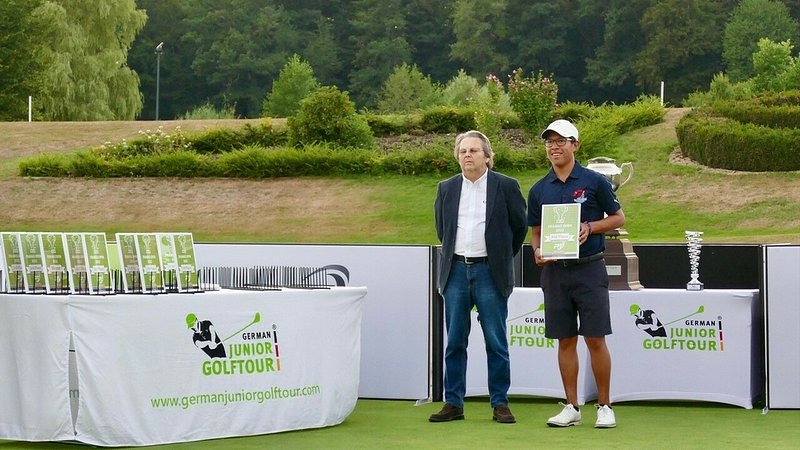 16-year-old Stefan Rojas brought Luxembourg to the podium for a second year in a row.

Rojas was runner up together with Maximilian Kukuk from Germany with a score of -7 in the U-19 category and tied in third place overall.

The Grand Duchy was present with 11 youngsters ranging from 9 years old up to almost 19, most of them part of the Junior National Team who attended with the invaluable support of the Luxembourguish Golf Federation. Their scores came with several new personal records after the four rounds and most of them significantly improved from last year.

In the U-19 Category, the players from Luxembourg achieved the following results out of 32 players in this age group:

This was a tough tournament for the youngest players, since they have to play same conditions and same course length as the older ones. Daniel, who started playing golf at 2 years old, commented: “The course was very long for me, I always started playing after 4pm and it was very hot, this made me feel very tired, but I like playing this tournament you feel like a little professional, with caddie on the bag and live scoring.”

What a performance from all of them. Playing under the soaring heat with temperatures feeling at 40 degrees Celsius, they have to bring to the game not only their golf abilities but also fitness and resistance, you can’t feel but admiration for these young athletes.

Stefan said “The weather conditions were very tough and very exhausting, it exhausted everyone, I struggled in some holes, made some mistakes but I am very proud of the way I finished”.

Overall for the boys who played 72 holes including all age groups out of 101 players who started, the winner Tim Hesselbach from Germany secured his position with an outstanding total of under 17. From Luxembourg, Stefan Rojas tied in third place, Alexander Dorier tied in 25th place, Andrew Rojas in 28th, Nicolas Winandy tied in 40th place, Maxime Morn tied in 63rd place, Charel Diederich tied in 70th place, Leo Zoenen tied in 85th.

Overall for the girls who played 72 holes including all age groups out of 33 players who started,  Joy Johnson from Germany collected the Girls’ winner prize with a score of  under 1 . From Luxembourg Emma Lahaije finished in 19th place and Lisa Steingrube finished in 20th place.

“I am very proud of my team and friends from Luxembourg, we all did our best and we all are improving,  besides  we had fun together and that is what matters” said Stefan Rojas.