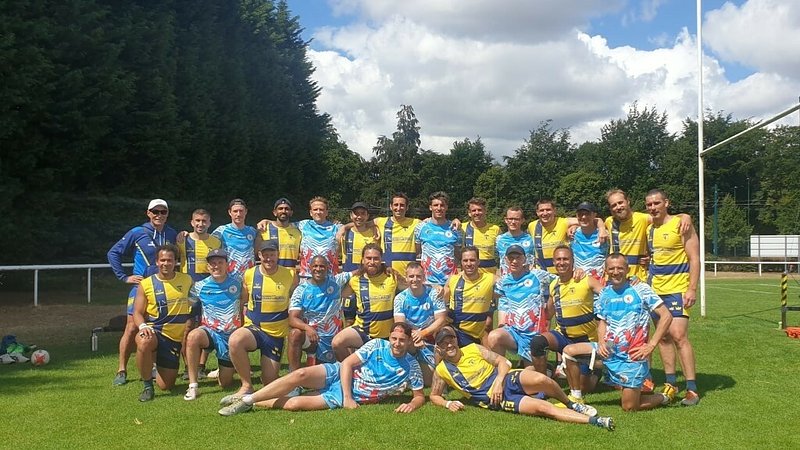 Touch Luxembourg performed valiantly with a small squad after injuries and circumstances decimated the team.

Touch rugby is a minimal contact code of Rugby, which is played through various age divisions, mens, ladies, and mixed formats. It is played as an inclusive community sport through to elite international competitions. It is played 6vs6 with rotating subs. In Luxembourg,  touch rugby started as a bunch of mates playing together and deciding to see if there could send a team to the 2011 World Cup, and has grown in fits and starts from there.

This year, Luxembourg has sent a mens over 30s team, and referee representative, to the Touch Rugby Euro’s at Nottingham University in the UK. There were over 1000 players and 150 officials from 17 countries are competing over 5 days. By the end of the competition over five hundred 40mins Touch games were played.

Playing against England, France and Ireland, Touch Luxembourg have played against world class sides with large squads and player pools. For example in England there are over 500,000 registered Touch players, we have 48! Luxembourg did well to hold our shape and composure in heavy losses to the heavyweights of touch in Europe, knowing our chances to excel would come against smaller teams. We competed in narrow losses to Belgium, Switzerland and Sweden, before a magnificent victory vs Sweden in our first playoff. See this link for the match (unfortunately no commentary). This led to huge celebrations on the club WhatsApp group, and calls for a victory parade and contact with the Ducal Palace… and to forget that it to put us through to a whole other game.

So Luxembourg progressed into the 5 & 6th place playoff, but our lack of squad depth just couldn’t get across the line against an experienced Swiss team. The 6th place finish against teams with much bigger player and support resources is a huge result for Luxembourg.

Everyone at Luxembourg Touch is hugely proud of the squad for their determination and performances. Also a special mention to Laurence Cortey, our elite referee representative who refereed the Semi Final of the Women’s over 27s division.

If you are interested in being part of this dynamic and growing sport in Luxembourg , get in touch on Facebook, instagram or via email at luxembourgtouch@gmail.com.