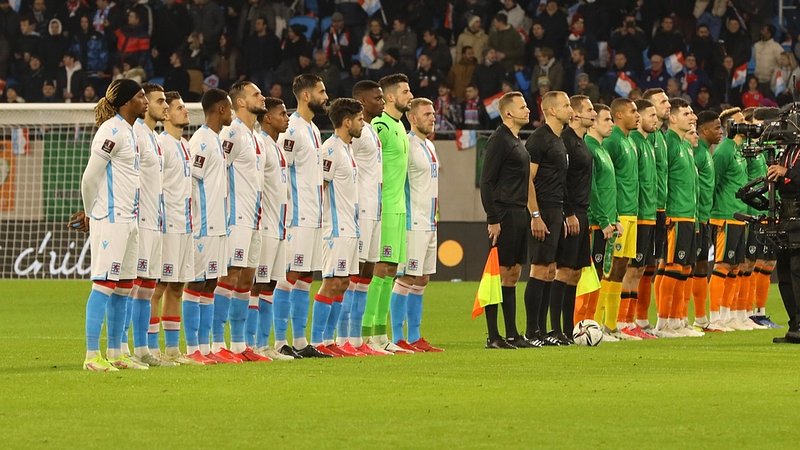 Despite great efforts and a disallowed goal, the Red Lions were not able to overcome the guests from Ireland in the final qualifier for the World Cup 2022 in Qatar.

On Sunday evening, Luxembourg had the chance to finish the World Cup qualifiers as third in the table for the first time in its history. Unfortunately, the guests from Ireland were able to make up for their 0:1 home-loss suffered against the Red Lions earlier in the campaign. The match ended 0:3, with Ireland scoring all three goals in the second half.

In the other game from group A, Portugal played against Serbia at home. Both teams went in with a chance for the top spot in the table, which Serbia managed to secure in the end with a 2:1 win.

This mean that Portugal will have to qualify for the World Cup via the play-offs. Ireland overtakes the Grand Duchy in the table as third due to a better goal difference. Azerbaijan is last in the table with one point.

Summary of the game

After a mixed first half with chances for both teams, the intensity of the game significantly increased after the half-time break. After a defensive mistake in minute 48, Gerson Rodrigues found himself alone in front of the Irish goal, but unable to overcome the keeper with his shot.

Six minutes later, Danel Sinani finally broke the deadlock and scored. Unfortunately, the Hungarian referee still decided to give a free kick against Deville for an earlier challenge, which meant the goal was disallowed.

Ireland managed to benefit from the lost momentum and scored their first goal after a free-kick caused confusion in the Luxembourgish penalty box. Duffy's header was soon followed by a second goal from Ogbene.

Although the Red Lions did everything to fight their way back, the game was finally decided when Robinson scored the third and final goal of the game.

Luxembourg thus finishes the World Cup campaign as fourth in the table with nine points. Despite having missed out on the third spot in the table, it remains the best result from a Luxembourgish football team in world cup history.