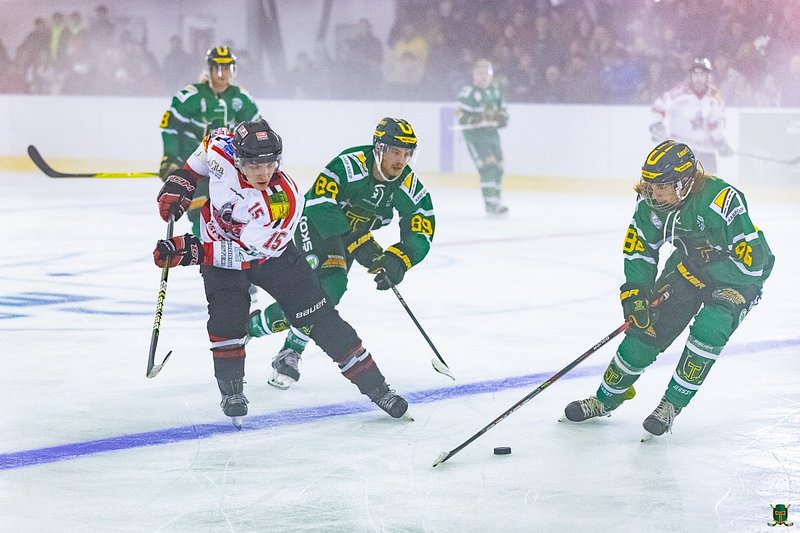 On Saturday 30 October 2021, 602 days after the last home match, Luxembourgish Judo international Anettka Mosr dropped the ceremonial first puck and Knights hockey in Beaufort was back.

On that evening the Knights had just defeated the Antwerp Phantoms a resounding 10-4 on an evening in which the organisation celebrated 50 years of existence by honouring its founding members. The club had been on a roll, winning 4-straight to put themselves in prime position for a place in the final four playoffs. Confidence was sky high, after all, the Knights had beaten each of the other 3 teams in the semi final places at least once that year.

As the club prepared to host their final regular season game at home against the last-placed Liege Bulldogs, news of a virus causing havoc around the world began to reach Luxembourg. Then on Thursday 12 March 2020 the club received the devastating news from the Royal Belgian Ice Hockey Federation (RBIHF) that the rest of the season and playoffs would be cancelled. There would be no more ice hockey played at the Beaufort Ice Park for some time, a lot of time.

During the months that the league was shut down the Beaufort Knights organisation continued to work, grow and to innovate. Yves Barthels joined as the new head coach, replacing the popular John Bierchen who had accepted an exciting coaching role in Finland. The Knights 2nd team and junior programs gained a new coach in Brad Holman from Canada. Holman would also be competing with the Knights first team as an active player.

Construction work on a new state-of-the-art dressing room facility was completed, the Ice Park Beaufort installed a brand new video scoreboard. Ticket sales were moved to mostly online purchases. Merchandise continued to sell at a rapid pace, providing much needed income whilst increasing the brand awareness of the Beaufort Knights. New sponsors were brought to the club, investing in sleek new jerseys and helmets. A local construction company sponsored the team and ice rink with the building of a television camera platform. And finally, multimedia provider LDMCEVOY Pictures invested in professional broadcast quality equipment to bring fans unable to attend future games a more immersive experience watching on YouTube. The infrastructure of the club had changed, the anticipation for a return to the ice was huge. The only thing left to do was wait.

On Saturday 30 October 2021, 602 days after the last home match, Luxembourgish Judo international Anettka Mosr dropped the ceremonial first puck and Knights hockey in Beaufort was back.

Rough start but quickly back on their feet

The match itself started poorly though for the men from Beaufort. Within 9 minutes they trailed the Mechelen Whales by a score of 0-3. Concentration seemed to be lacking as 2 goals were the result of bad turnover passes in the defensive zone, followed by a disastrously timed line change that allowed Oliver Bouchard to cross the halfway line, enter the Knights’ zone, shoot and score, completely uncontested.

As in the opening game of the season away to Olympia Heist last weekend, the Knights started badly but began to grow into the game. At 15:36 Mirko Mosr would find success with a quick snipe from in front of the net. 32 seconds later Brad Holman would ensure the game was truly back on. After a calm drop pass by Ben Houdremont, Holman would muscle his way past a Whales defender and light the lamp to end the 1st period at 2-3.

Many of the 300+ fans in attendance were still finding their way back to their places when Sacha Backes tied the score at 3-3, a mere 17 seconds into period 2. Finding space at the back post after Benny Welter had drawn the attention of the Mechelen defence and goalie, Backes had an open net tap-in. Play would slow in pace a bit as the second period progressed. For the majority of the match, both teams had to battle through a thick layer of fog that frequently settled on the ice. Making visibility near impossible at times. Nevertheless the teams fought on and at 28.19 the Knights would find their form on the power play and Mirko Mosr would get his second of the evening after some silky smooth puck movement from Holman to give the Knights their first lead of the game. The lead would hold until 34.36 when Olivier Bouchard fooled everyone behind the Beaufort goal, laying a great pass to Kjell Cazaerck to tie the score at 4-4 going into the 3rd period.

Just as in the opening minute of the 2nd period, the 3rd frame would begin with a goal. This time it was Scott Dunn of Mechelen who would rip a shot into the top corner from the blue line to regain the Whales 4-5 score advantage. A few minutes later Mechelen appeared to have the win in the bag after a fluky shot from behind the Beaufort net would bounce in off the leg of Knights goalie Michel Welter to make it 4-6. As the match began to approach the end, Sacha Backes stole the puck at the halfway line, raced into the zone and scored to give the Knights hope and bring the crowd back to life.

The final seconds of the match would be tense as the Knights attacked on the power play. Having removed their goalie for an extra attacker it was all or nothing. With less than 2 seconds left on the clock a scramble in front of the Beaufort Knights 2 October 31, 2021 Mechelen net would see the puck trickle out to captain Claude Mossong who then ripped the puck into the back of the net to an explosion of noise from the Beaufort Ice Park crowd. The Whales would feel hard done by and even with the benefit of post-game video review due to the livestream, it will forever be inconclusive as to whether or not the time had expired.

Knights’ Livestream producer Liam McEvoy clarified after the game “As it stands our stream has a manually controlled scoreboard that is not synchronised to the actual game clock. So I apologise to any fans who are upset at seeing the goal scored after the clock had clearly expired on the stream”.

In the RBIHF division 1 the referees’ ruling on the ice is final and the goal was given to send the game into a penalty shootout. The goalies would reign supreme in the shootout with no goals allowed until Knights star, Mirko Mosr used a subtle head fake to move the puck from left to right and then into the net on his backhand to win the match and spark the wild celebrations in the crowd.

The match was over but the entertainment wasn’t, as the Knights of Luxembourg would then take to the ice for a demonstration of real medieval sword fighting to send the fans home happy and leave some mesmerised looks on the faces of the large group of children watching from the sidelines. As the fog settled and the audience went home into the night, hockey in Beaufort was back.