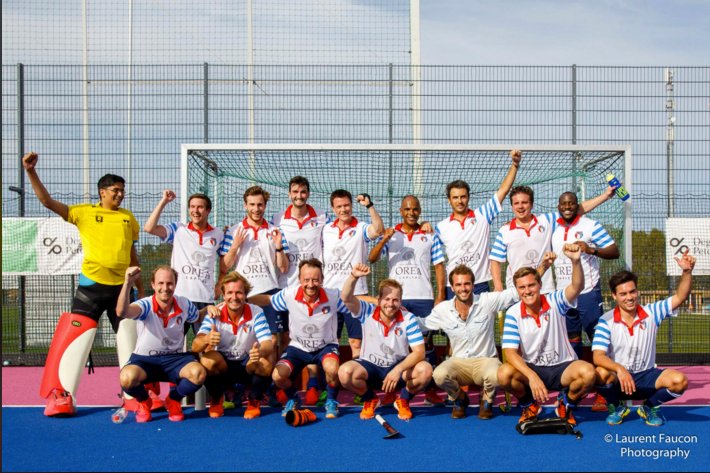 A substantial home crowd came to support the blue riband team, and Luxembourg was very keen to bring the club the first National League victory in their history.

Focused, diligent, and perfectly organised, the home players displayed an impressive level of play from the very first moments of the match.

Starting in a beautiful shape, Gratien Kangulumba received a millimetre perfect aerial from Olivier Willame in the opposing half. The virtuoso threaded a pass through the eye of a needle for Milan Dans who opened the scoring with a scorching reverse stick strike (1-0).

The home team redoubled their commitment in the next 15 mins. Having set up defensively at the start of the encounter, they changed the rhythm of the match by bringing in an additional striker, one Nicolas de Charry.

The latter used his speed to pierce the Jaguar's defence and centre the ball towards Milan Dans. The Lux striker subtly deflected the ball into the top corner for his second of the afternoon, to leave the team comfortable at the break. (2-0)

Mindful of the prize at stake in the second thirty-five minutes, the Luxembourg players returned to the pitch filled with the same intentions as in the first act.

Denying the Jaguars a moments respite, they scored two more goals in quick succession. Gratien Kangulumba, delivering another sparkling performance, penetrated the poor opposing goalkeeper with a powerful shot that clattered the backboard with a sound that could have been heard from the "Gründ"! Finally, it was on PC that the home team sealed the  deal. Our captain, Laurent Nève, slapped it along the deck for Milan Dans who sealed a ‘hat-trick’ by diving for a tip-in with the edge of his stick! (4-0)

The Grand Duchy fought valiantly to maintain this position until the final whistle. Arnaud Debeaumont masterfully deflected an opposing PC on the line while Matthew Nunes was imperious for his return as goalkeeper.

The entire team delivered a game of high quality. The score did not change, despite some nice additional attacking plays. The job was done and our gentlemen could rejoice: we finally had this first historic victory for the Hockey Club of Luxembourg. Savouring this victory with our supporters, the celebrations were huge!

The Luxembourg team are looking great and the club has a bright future ahead of them. We can guarantee that this group will give us some great times in the future.

Today, and beautifully aided by their female brethren, they placed Luxembourg on the hockey map.

With the explosive growth of this fine sport, it is a perfect time to deliver such a remarkable performance!