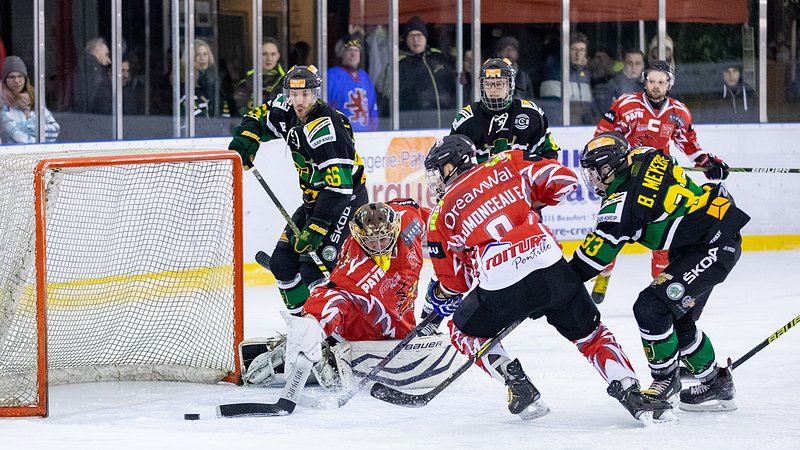 On Saturday night the Beaufort Knights played host to the Charleroi Red Roosters in a matchup with big playoff ramifications.

On Saturday night the Beaufort Knights played host to the Charleroi Red Roosters in a matchup with big playoff ramifications. In the Royal Belgian Ice Hockey Federation (RBIHF) 1st division only the top 4 teams from the league of 9  each the playoffs. Seeing as Herentals Toekomssteam and Olympia Heist have run away with the top 2 spots this year, the 3rd and 4th positions have become crucial. Heading into Saturday’s game the Knights were locked in a battle of 5 teams for those places. A 2-3 loss to the Red Roosters this weekend has hurt their chances, although there is plenty of hockey still to play.

Facing the leading scorer in the division, Martin Davidek, who has racked up an amazing 20 goals and 24 assists in only 13 games, is challenging enough and the Knights would have to do it without arguably their most influential defenceman Kevin Grönlund and their most prolific scorer since his arrival to the team, Sacha Backes. In the early stages of the game their presence was missed as Charleroi took an early 2 goal lead curtesy of a Loic Drury powerplay goal at 13:49 and an even strength goal by Gil Krnac at 15:34. The Knights lacked their usual intensity in the 1st period, perhaps a sign of game rust after a 3-week break.

That fire that the Beaufort faithful have become so used to seeing was back in the second period as it took all of 38 seconds for top scorer Benny Welter to light the lamp and bring the crowd back to life. Good pressure from Cedric Farinon lead to a turnover and Ben Houdremont capitalised with speed before chipping a nice pass over to Welter, who showed great patience to deke the Roosters goalie and slot the puck into the wide open net.

With the score 1-2 to Charleroi the next 17 minutes of play was a tight contest. The Knights missed a golden opportunity midway through the period, failing to score with a 2-man advantage due to penalties to Drury and Pascal Rolland of the Roosters. The game tying goal would eventually come at 37:07 as Mirko Mosr scored his 8th goal of the season on a perfectly executed powerplay. Beaufort moved the puck from right boards up to the blue line to the left boards, to the goal line, then to Mosr in the slot who fired home. A set play that is certain to make head coach John Bierchen pleased.

Entering the third period many in the audience could sense a repeat of the previous 2 home games that#went into sudden death overtime. Both teams had chances to score but it would be Charleroi who would strike the decisive 2-3 goal. At 43:13 Benoit Verhaeghe got lost in coverage then pounced on a terrific pass from Diego Marrant. The Knights battled until the end but simply couldn’t find that little bit of magic to force another overtime period and the men from Charleroi would take all 3 points home with them.

Despite the defeat the roughly 400 fans at the Beaufort Ice Park were once again treated to a close matchup. These young Knights are still growing and finding their place in the division but are certainly good value for money. For the 9th time in 11 games this season their match was decided by 2 goals or less. The next home match will be on Saturday 15th February at 19:30 against the league leading Olympia Heist. The away fixture ended also in overtime with Heist winning 4-3. John Bierchen’s squad will need to be at their best to slow down Olympia’s offence who have scored a mind blowing 99 goals in 14 matches this season, including a 20-4 demolition of Antwerp back on January 24th.

In other Luxembourg hockey news. Saturday also saw 2 games taking place at Patinoire de Kockelscheuer as the Cool Puckers battled to an impressive 1-4 defeat at the hands of the Trophée Fédéral north east division leaders Epinal. Also, Tornado Women’s team took part in the annual IIHF Global Girls Game, a friendly matchup that takes place all over the world simultaneously with the scores accumulated. In the Luxembourg leg, 22 players took part with Team Blue winning 4-3. Team Blue were the overall winners by a combined score of 119-102 over team white.