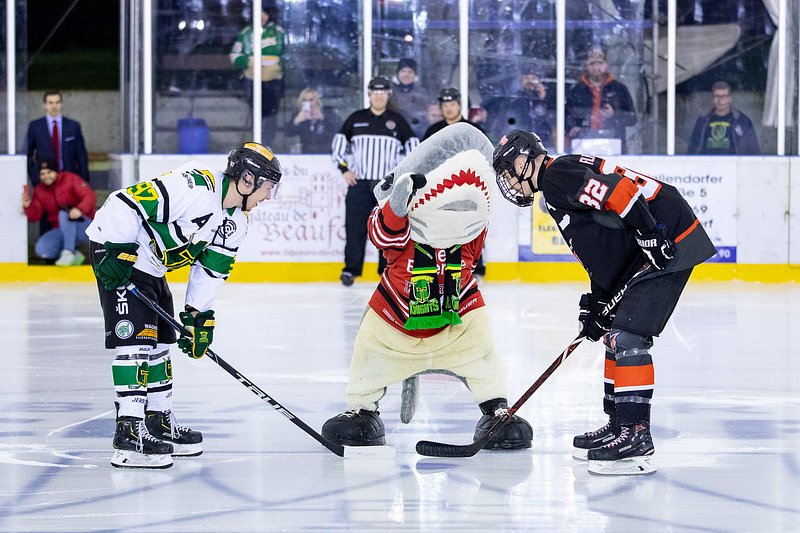 In sport, as in life, consistency is a key element of progress. The Beaufort Knights this season have done a lot of things consistently. Heading into Saturday’s home match against the Mechelen Golden Sharks, the Knights boasted the best defensive record in the league. They were also the least penalised team by some margin. Another thing this Beaufort team have done consistently is make their fans bite their nails.

After last week’s overtime drama following an impassioned comeback, the home fans could have been forgiven for thinking this matchup would be easier on the nerves, especially given the early 2-0 lead the Knights enjoyed after only 2 minutes of play.

Perhaps the home team players became too comfortable and began to enjoy the raucous atmosphere generated by another attendance of roughly 500 fans. At 06:50, After a defensive zone block by Mechelen released star forward Stefaan Swennen on a breakaway, the shutout was broken and life was breathed back into the Sharks’ bench.

The momentum was further swung Mechelen’s way when an uncharacteristic string of penalties left the Knights playing shorthanded for nearly half of the 20 minute period. The 4 Knights penalty killers on the ice were caught puck watching and made to pay by Jonathan Caple Daniel who tied the game at 2-2. Caple Daniel’s goal appeared to suck the life out of the crowd for a time and Mechelen took control of the game on the back of the 2nd goal of the night for Swennen at 17:16 to end the first period Beaufort 2-3 Mechelen.

Beginning the 2nd period the Knights were made to pay once again for 2 more penalties when at 28:16 Rafael Salmi put the Golden Sharks into a commanding 2-4 lead on the powerplay. If there’s one thing fans have learned from this Beaufort Knights squad though, it's that no lead in hockey is safe.

At the halfway point of the match, this tightly fought contest turned into an outright slugfest as both teams’ offenses traded blows. It began at 30:53 when Ben Houdremont struck on the powerplay with a nicely placed slapshot from the top of the left circle, 3-4. The deficit was 1 goal for a mere 33 seconds until Sharks defenceman Arvo Lahti took an outstanding pass from the influential Mick Op De Beeck and rifled a shot from the blue line into the Knights goal, 3-5. As soon as the pendulum appeared to swing in Beaufort’s favour, the Sharks struck again. At 36:50 Stefaan Swennen used his blistering speed to create another breakaway, completing his hat trick and moving the game evermore out of reach, the score now 3-6.

Comfort it seems, is a dangerous thing to have though and the Knights had not been vanquished yet. With less than 2 minutes remaining in the second period hope was rekindled by last week’s overtime hero Sacha Backes, who tapped in his 2nd goal of the night on a well worked powerplay, 4-6.

Discipline would be the Achilles heel for both teams as Mick Op De Beeck would be penalised again 91 seconds later and put Beaufort back on the man advantage with 22 seconds remaining in the period, Benny Welter would only need 13. Stepping off the right hand boards, Welter wound up and ripped a rocket into the top corner to end 10 breathtaking minutes and close out the 2nd period with the score 5-6 to Mechelen.

As has become customary for hockey in Luxembourg, the home fans were treated to entertainment during the intermission. After the gorgeous figure skating of Luxembourger Mara Wager last week, this week it was the world-famous mascot of the DEL Kölner Haie “Sharky’s” turn to hype the packed Ice Park. He wowed the audience with his on-ice break dancing routine in full giant shark costume. The Children in the audience could be seen running to Sharky for high-five’s, fist-bumps and selfies throughout the night. The fun and games were over though and it was time for the third period.

If you thought nothing could top the second period for intensity then you were in for quite a surprise. At 43:49 defenceman Kevin Grönlund lead the rush, finding youngster Chris Meyers who spectacularly dove to push the puck past the Sharks goalie and even the score at 6-6.

The audience could smell blood and as the drums rang out around the rink, the Knights forced Mechelen into taking another penalty and 80 seconds after the tying goal, Beaufort were back in the lead for the first time since the 13th minute of the match, some 9 goals ago!

Once again Ben Houdremont set up shop in the “Alex Ovechkin office” at the top of the left circle. Back in November, Houdremont helped end the Knights’ losing streak against defending champions Leuven with a powerplay goal from this position, tonight, he helped retake the lead, 7-6. Victory appeared within reach until the 50th minute when an odd-man rush saw the Sharks even the score now at 7-7. Nerves were starting to show at this point and at 52:38, while shorthanded, Stefaan Swennen, who had been a nightmare all game long with his speed, forced the otherwise outstanding, Kevin Grönlund into rushing a pass in defence. In a flash, Swennen collected the puck and found the back of the net for the fourth time, 7-8.

Conceding a shorthanded goal this late in any game can be a backbreaker, but Sacha Backes had other plans. 75 seconds later he took a pass from Benny Welter, blew past a defenceman and from the slot roofed the puck into the top right corner for his hat trick, 8-8. The final 6 minutes were played out more conservatively (comparatively) and for the second week in a row the Knights would play 3 on 3, sudden death overtime.

The fairytale ending of last week seemed destined as the same top-scoring line of Backes, Welter and Mosr matched up against Lahti, Op De Beeck and Swennen from Mechelen. Sadly though, after some near misses for the Knights, the home fans would not celebrate this week as Lahti scored the 8-9 game winner at 62:21 to break Luxembourgish hearts. A rollercoaster of a matchup was over and neither team deserved to lose. Normally one would be inclined to not expect another such offensive display for a long time to come, with these Knights however, you just never know.

Despite the loss, the Knights continue their 7-game point streak dating back to November 2nd. The point leaves them in fourth position in the table with 6 games to go. Next up for the Knights is a visit from the league’s top scorer Martin Davidek and his Charleroi Red Roosters on Saturday 8th February at 19:30. The Knights won the away match by a score of 3-1 so this one looks set to be yet another exciting affair.

This past weekend Luxembourgish ice hockey reached unprecedented heights of viewership. On Friday night, Tornado Women, the nation’s first all-women’s team, played their first full match against a beginners squad of 30 players in front of an impressive audience for a 21:00 friendly.

On Saturday, Tornado men’s team treated the estimated 550 spectators at Patinoire de Kockelscheuer to a 12-3 hammering of Garges. Meanwhile in Beaufort, the estimated 500 fans at the Ice Park were joined by nearly 400 watching live on youtube. All week long Luxembourgish hockey has been represented at the Youth Olympics in Lausanne by young stars Lina Meijer and Nicolas Elgas. Elgas will play in the semi-final for his team on Tuesday 14th January and is guaranteed to compete for a Youth Olympic medal on Wednesday.

To cap it all off, the Puckers learned that “The Spirit of the Game”, the cinema movie about them has received 2 nominations at the 40th annual Sport Film Festival in Palermo, Italy in 2 weeks time.

Consistent hard work by a community of people is starting to pay off and the world is taking notice.

The decade is only 12 days old.

Knights' schedule for the season: