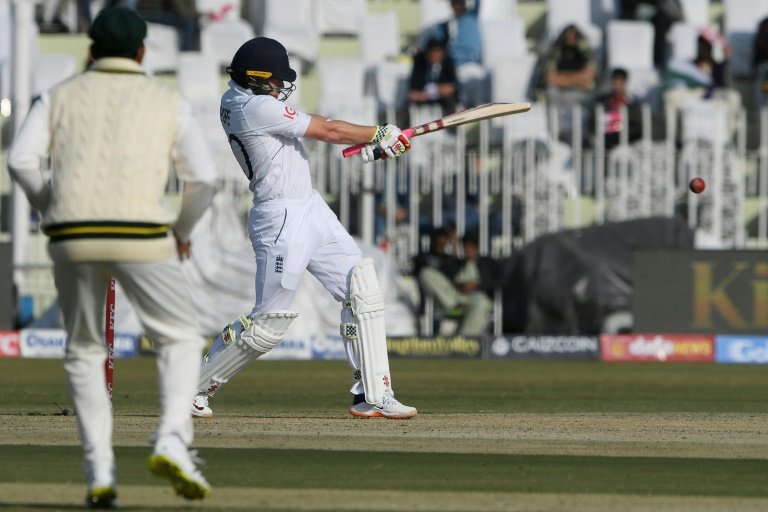 Stylish Ollie Pope followed openers Zak Crawley and Ben Duckett in scoring a century Thursday as England enjoyed a run-fest on a flat Rawalpindi Stadium pitch on the opening day of the first Test against Pakistan.

The 24-year-old pushed part-time spinner Agha Salman for a single to complete his third Test hundred in his 31st match, raising his bat to a crowd of 6,000 -- including a band of around 150 "Barmy Army" fans.

Duckett's milestone came in his first Test in six years, after his debut against Bangladesh in 2016. He was then discarded after scoring just 110 runs in four matches.

Crawley, 24, drove Pakistan pacer Naseem Shah to the cover boundary in the first session to reach his third Test century in his 29th match, but not before overturning a leg-before decision via review.

The lanky 1.96-metre (six-foot-five) batsman showed his intent right from the start, hitting three boundaries off Naseem's first over of the day and bringing up his half-century with another off spinner Zahid Mahmood.

He narrowly missed the chance to become the first England batsman to score a century before lunch, falling nine short.

Seven England batsmen, including current captain Ben Stokes, have scored a century before lunch in a Test -- but none on the first day.

England's robust batting was the ideal start to the Test -- their first in Pakistan in 17 years -- after it hung in the balance Wednesday when several visiting players came down with a mystery virus.