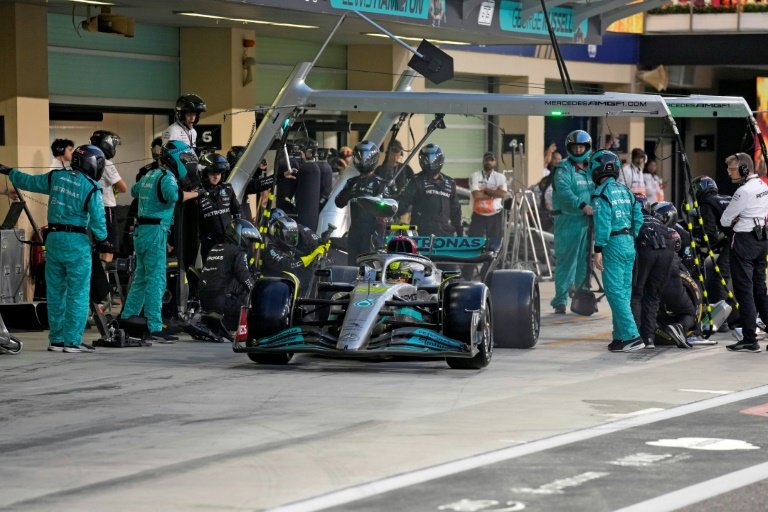 Lewis Hamilton completed his first winless season in Formula One on Sunday and then said "I'm glad it's done."

It was a year of fluctuating fortunes for Mercedes team which struggled to adapt to the new ground effect rules.

Although their results improved over the season, the team only won one race. George Russell took first last week in the Brazilian Grand Prix with the title already decided.

Last season, Hamilton won eight races as he lost his title to Max Verstappen. It was his lowest total since 2013. Before this year he had at least one victory in each of his 15 seasons.

On Sunday, the seven-time champion retired three laps from the end of the season-ending Abu Dhabi Grand Prix with hydraulics problems as two-time champion Max Verstappen drove to a flawless record-extending 15th win of the year.

"Of course, it would have been nice to have had a win," Hamilton told reporters, when asked about the end of his streak.

"And when we got our first podium: felt like a win and those seconds felt like we had really achieved something so I'll just hold on to those."

Hamilton did not finish as high as second until the 12th race in Austin and followed that with runners-up finishes in the next two races in Mexico City and Sao Paulo.

In Brazil, Mercedes claimed a one-two a week before the Abu Dhabi race.

"I always believed, right until the last race, that there was potentially a chance. I think it's so important to hold on to hope and to just keep on working.

"We gave it everything and I think this last race was almost like the whole season summed up...I'm glad it's done."

His exit from the race was his first mechanical failure of a season overshadowed by the team's problems with the bouncing and 'porpoising' of their car built for the new ground effect era in the sport.

"That was really not good -- all the mistakes we can make," said team boss Toto Wolff.

"The car was not at the pace it should have been: third quickest and one breaking down and the other one running out of tyres.

"We knew that Abu Dhabi was going to be difficult for the car, certainly the correlation is good."

Hamilton declared before the race that he would be glad to leave the capricious W13 car behind, hoping for a faster, more reliable and responsive car next year.

Wolff said he planned to use the model as a reminder at the team headquarters and the nearby engine plant in England.

"We are going to put this car in reception in Brackley and Brixworth to remind us every single day how difficult it can be.

"Thank you, everyone. This is a character-building season. Not a blip for a race, but a full season. But you kept pushing so hard, the engine went really well and I'm proud of what we achieved there.

"On the chassis side, there were more bad moments than good ones, but the good ones were spectacular, made us feel how good it can be. Now we are just pushing forward for next year. It is rough, bad and it is ok to feel like this but next year, we are back."