The 13-year-old captured the skateboarding park world championships title in Sao Paulo, beating out countrywoman Sakura Yosozumi with Britain's Sky Brown third in a preview of Tokyo 2020 when the sport makes its Olympics debut.

But tiny Okamoto, who has won the last five competitions she has entered in a sizzling run of form, including gold on her first appearance at the prestigious X Games last month, is keeping her feet firmly on the ground.

"I didn't think about the win streak, or being the youngest world champion," Okamoto told AFP.

"I have no idea about the Olympics yet, but I will work with my coaches to keep pushing to learn new tricks and to go bigger." 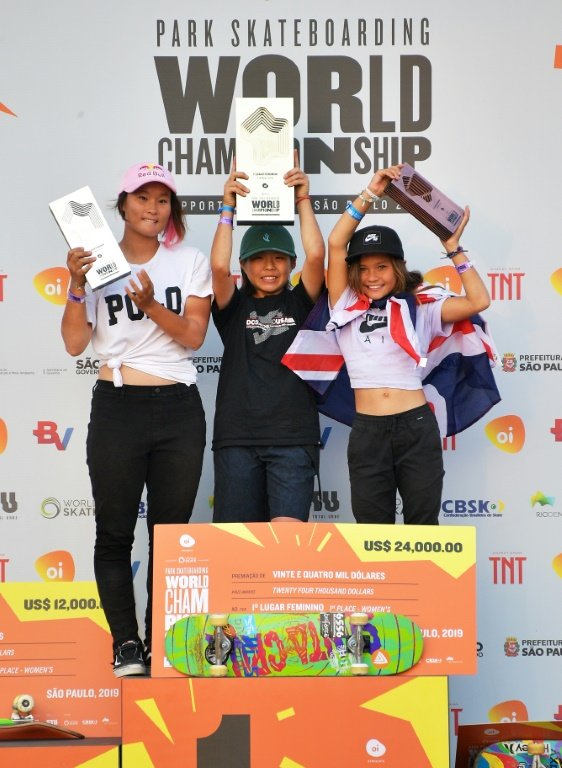 Okamoto insisted she wants to be recognised by her peers in the skateboarding scene, regarding it as much as a lifestyle as a sport, in much the same way as surfing which will also make its Olympic debut in Tokyo.

"Skateboarding is not just based on competition," she said.

"I want to be one of the best from a cultural perspective. I'm still a long way from that, but that's my vision."

"We don't look at skateboarding as a sport, there's more to it," he said.

"There is some heavy history and culture in skateboarding. When you are recognised as one of the top skaters in the scene, that's when she can claim that top skater status. You can't just win contests and be a top skater."

Brown, who has a Japanese mother and lives in Miyazaki, had hoped to represent Japan at the Olympics before opting to compete under the British flag.

Okamoto, who stands at just 1.42 metres tall (4ft 6in), combines a smooth-flowing technique with an ice-cool temperament that belies some of the fiendishly difficult moves she effortlessly pops out.

Japan have strength in depth in women's skateboarding -- with 10-year-old Kokona Hiraki, Mami Tezuka and Yosozumi among their Olympic hopefuls.

Precious points in the race to qualify for Tokyo 2020 were on offer in Brazil over a four-day event also serving as the seeding competition for next year's Olympic preliminaries.