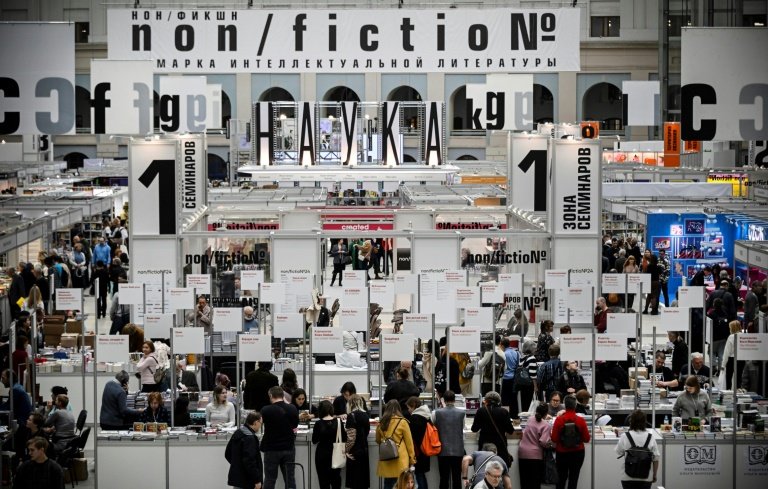 Russian publishers at a leading Moscow bookfair told AFP Thursday they were "all very worried" by new restrictions and feared the return of Soviet-like censorship.

Since President Vladimir Putin sent troops to Ukraine on February 24, Russian authorities have strengthened controls on the flow of information, including in the arts.

Last week, lawmakers approved a bill banning all forms of LGBTQ "propaganda" in books, films, the media and the internet.

Authorities also want to ban the sale to minors of books written by "foreign agents" -- a label given to Kremlin critics and activists, but also to a growing number of writers.

Leading novelists like science fiction writer Dmitry Glukhovsky and historical fiction novelist Boris Akunin have been slapped with the tag, which has Stalin-era connotations.

At the "Non/Fiction" book fair in Moscow -- an important annual cultural event in the Russian capital that opened Thursday -- many publishers, booksellers and readers were concerned.

Yevgeny Kopyov, of the large Eksmo publishing house, said he was worried by the "broad interpretation" of the LGBTQ propaganda law.

He warned that it "may affect a large amount of literature, including the classics."

"Everything will depend on our interaction with the regulatory authorities," he concluded.

Many publishers like Kopyov are waiting for authorities to clarify what they believe is LGBTQ "propaganda" or not.

But some bookstores in Saint Petersburg already got rid of problematic books by offering discounts of up to 50 percent, according to local media.

At the Non/Fiction fair, Marina Kadetova of the Kompas-Gid publishing house, warned that the restrictions are fuelling "self-censorship."

"When people start censoring themselves, then the problems start," she said.

Her job, she said, has become harder.

"In any restrictions that are not justified and not thought through, it is hard to work."

Tatiana Stoyanova, who also works at the same publishers, said the restrictions could lead to a revival of the Soviet "samizdat" practise that saw the underground publishing of banned books.

"In Russia, there is such a mentality: the more its forbidden, the more it's interesting," she said.