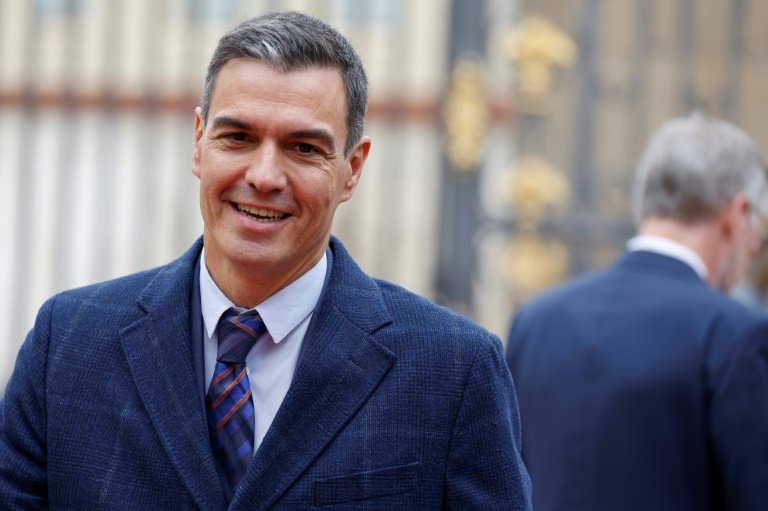 Spanish premier Pedro Sanchez takes over this week as head of the Socialist International, which groups 132 centre-left parties from around the world / © AFP/File

Spanish Prime Minister Pedro Sanchez will on Friday become president of an international socialist grouping, a potential springboard to a major post on the world stage.

A year before a general election in Spain, which polls suggest he will struggle to win, Sanchez is the only candidate to head the Socialist International (SI) -- an umbrella group of 132 centre-left parties from around the world.

The telegenic 50-year-old takes over from former Greek prime minister George Papandreou as head of the SI which begins a three-day gathering in Madrid on Friday.

"While symbolic... this post could be a way (for Sanchez) to regain credit among voters by presenting himself as influential on the world stage," said Pablo Simon, a political science professor at Madrid's Carlos III University

"But it also could be that he plans on capitalising on this network of international contacts" which the post offers to "play a prominent role later" in a top global body, he added.

Former Portuguese prime minister Antonio Guterres led the International Socialist before he went on to head the United Nations refugee agency in 2005 and then become UN secretary general in 2017.

"All prime ministers who love foreign affairs have a tendency to look for an international post to secure a post-governmental career," said Teneo Intelligence analyst Antonio Barroso.

Sanchez has made international affairs a priority since he came to power in June 2018, in contrast to his conservative predecessor Mariano Rajoy, and has sought to boost Spain's influence in the European Union.

Within days of taking office, Sanchez made international headlines by agreeing to take in migrants from the Aquarius rescue ship who were rejected by other European nations.

The first modern Spanish premier to speak English fluently, Sanchez served as chief of staff to the UN high representative to Bosnia during the Kosovo conflict.

He has fostered good relations with France and Germany, which has made Spain "one of the engines of European politics", said Simon, citing as an example Madrid's lead in talks over the energy crisis sparked by the war in Ukraine.

"Spain has much more weight in the European Union debate than 10 years ago," said Barroso, adding the premier had "boosted Spain's credibility" with its "European partners".

Beyond the EU, Sanchez hosted a crucial NATO summit in Madrid in June, just four months after Russia's invasion of Ukraine, and has "reconnected" with Latin America, which has shifted to the left in recent years, said Simon.

Sanchez visited four Latin American countries in August 2018, his first official trip outside Europe, in what was seen as an effort to underscore the region as a priority of his foreign policy.

- With Biden and Macron -

Seen as an attempt to burnish his credentials on international affairs, the photo was much mocked on social media.

But Ignacio Molina, a senior analyst at the Elcano Royal Institute think tank, believes Sanchez's priority is to remain prime minister after the general election, which is expected by the end of 2023.

Speculation about a possible senior role for Sanchez at a global body is coming from Spain's opposition parties, which have "spread the idea he uses international meetings to prepare his future in case of an electoral defeat next year", Molina said.

"I don't think he's deliberately developing an international network for personal reasons. It's more because he's at ease in European politics, where he faces less opposition."