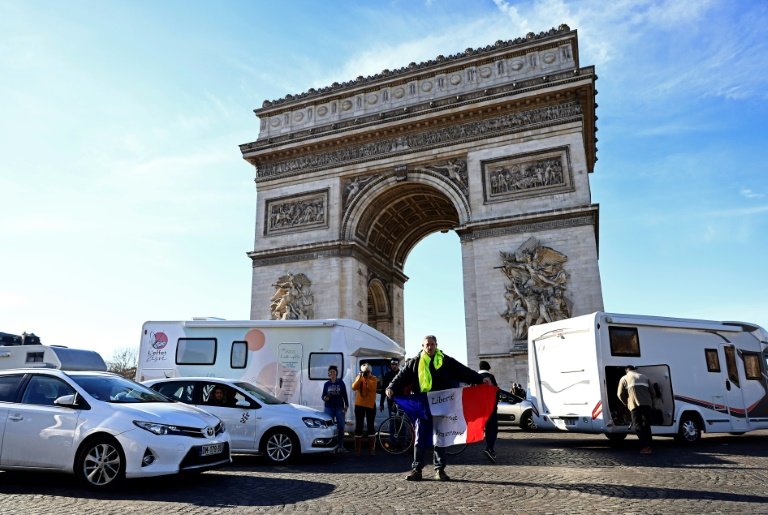 Around 100 drivers defied the protest ban to snarl traffic on the Champs-Elysees on Saturday. / © AFP

Paris police said they arrested 97 people who defied a ban on a Canada-style protest convoy over coronavirus regulations to try block traffic in the capital, with 81 still in custody Sunday.

Thousands of demonstrators from across France attempted to block traffic in the capital Saturday in a self-proclaimed "freedom convoy" of cars, trucks and campervans. Hundreds of them continued on to Brussels on Sunday.

In Paris, more than 100 vehicles managed to converge on the Champs-Elysees avenue, where police used teargas to disperse protesters in scenes reminiscent of the "yellow vest" riots of 2018-2019.

Dozens of people remained on the famous avenue and in the nearby Bois de Boulogne forest park until early Sunday.

Prosecutors said one of those being held was Jerome Rodrigues, a leader of the "yellow vest" protest movement, which engaged in running battles with the police every weekend for several months in late 2018 and early 2019.

The Paris police department also said an internal inquiry has been opened after a video emerged on social media showing an officer pointing his gun at a driver near the Arc de Triomphe monument at the top of the Champs-Elysees.

The protest is one of several worldwide inspired by the truckers' standoff with authorities in Canada.

In France, the demonstrators took aim at the "vaccine pass" required to enter restaurants, cafes and many other public venues implemented as part of President Emmanuel Macron's inoculation drive.

"This Covid pass is just the latest in a series of anti-freedom measures in our country -- we have freedom of movement in Europe, yet we're being stopped by the police, we don't have the right to be here and carry a flag," Daniel Bravo, 61, told AFP.

Over 400 vehicles camped out at several sites around Paris overnight, and organisers have called for people to head for Brussels for a major demonstration on Monday, a police source said.

However not all are expected to make the trip, the source said.

Belgium has banned the protest, and its Prime Minister Alexander de Croo has urged would-be attendees to "go and protest in your own country".

The demonstrations, with convoys setting out from cities across France, come two months before presidential elections in which Macron is expected to seek re-election.

On Friday, Macron said he understood the "fatigue" after two years of the pandemic.

"This fatigue also leads to anger. I understand it... But I call for the utmost calm," he told the Ouest-France newspaper.

The government has said it plans to relax face mask mandates by February 28, and is hoping to end the vaccine pass requirement by late March or early April.

Some 24,000 more people demonstrated in other parts of the country Saturday, the authorities said, including in the southern city of Montpellier, where radical fringe activists broke the glass facades of two banks.