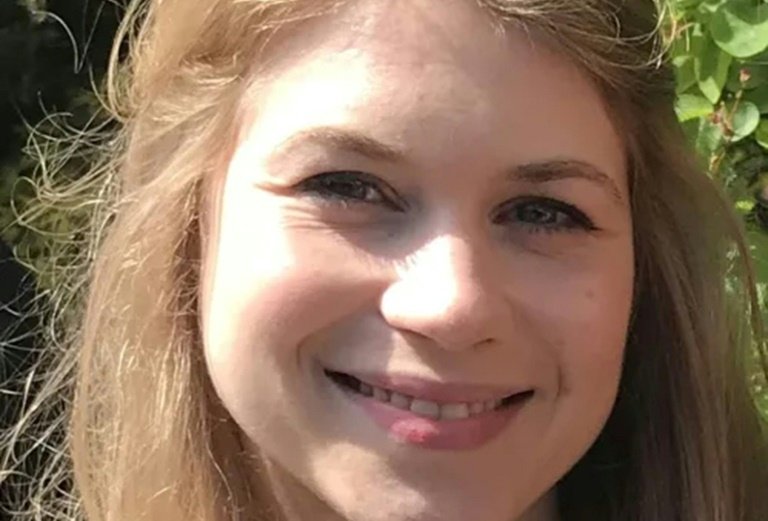 A British police officer was on Thursday sentenced to spend the rest of his life in jail for the kidnap, rape and murder of Sarah Everard, whose disappearance sparked protests and calls for action against male violence.

Wayne Couzens, 48, snatched the 33-year-old marketing executive in south London in March, after falsely arresting her on the pretence she had broken coronavirus restrictions.

The judge said that Couzens' use of his police status to carry out the "grotesque" offences warranted the highest penalty, a rare whole-life jail term for which there is no possibility of parole.

The sentence means Couzens joins 60 other of Britain's most dangerous criminals who will die behind bars.

Prime Minister Boris Johnson said he was "sickened" at Couzens' crimes, and that the officer had acted in "total betrayal" of his role to protect the public.

Everard's disappearance sparked one of Britain's most high-profile missing persons investigations and protests calling for better safety for women in public spaces.

Couzens, who served with the elite diplomatic protection unit of London's Metropolitan Police, admitted kidnapping, rape and murder at a hearing in July and was sacked. 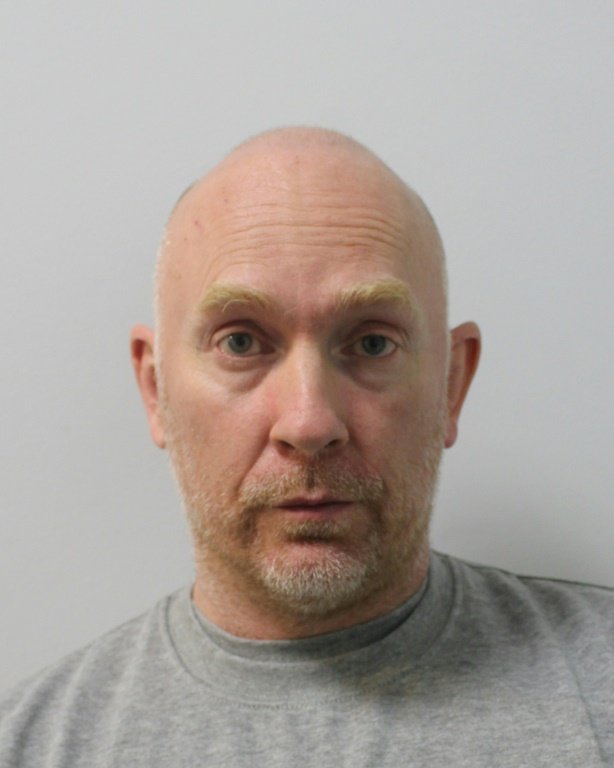 Sentencing Couzens at the Old Bailey in central London, judge Adrian Fulford said his actions were "devastating, tragic and wholly brutal" and his victim was "wholly blameless".

"The misuse of a police officer's role such as occurred in this case in order to kidnap, rape and murder a lone victim is of equal seriousness as a murder for the purpose of advancing a political, religious ideological cause," he added.

Former colleagues said he had disgraced their uniform, while the Met said it was "sickened, angered and devastated" by his crimes.

Everard's family said they were relieved at the severity of the sentence. "The world is a safer place with him imprisoned," they said in a statement.

The high-profile case refocused attention on how the police handle complaints of violence against women and girls in Britain. 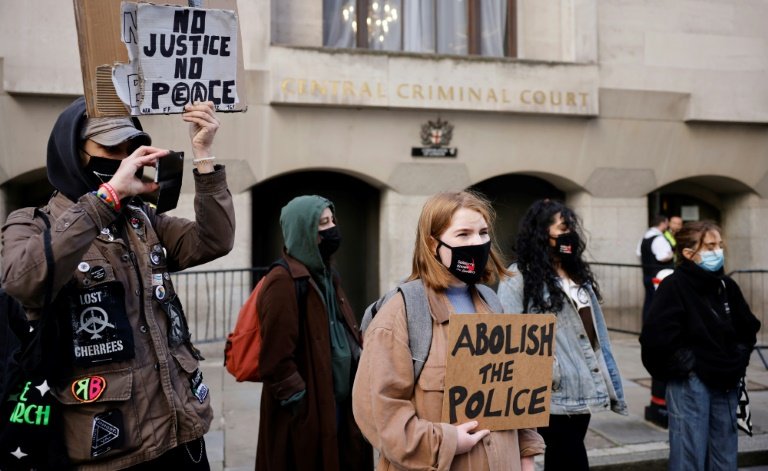 "No woman should have to fear harassment or violence. We will do everything possible to prevent these abhorrent crimes and keep our communities safe," said Johnson.

But questions have been raised about failures to address previous complaints of indecent exposure against Couzens, said to have been a user of sex workers and violent pornography.

He also called for a review of how Couzens was able to "slip through the net", despite a series of "warning signs".

Starmer's Labour colleague, Harriet Harman, a former women's minister, said the case had "shattered" women's confidence in the police and called for the resignation of Met Police Commissioner Cressida Dick.

The Met, Britain's biggest police force, was already under fire for its botched initial handling of the double murder of two sisters in a London park last year. 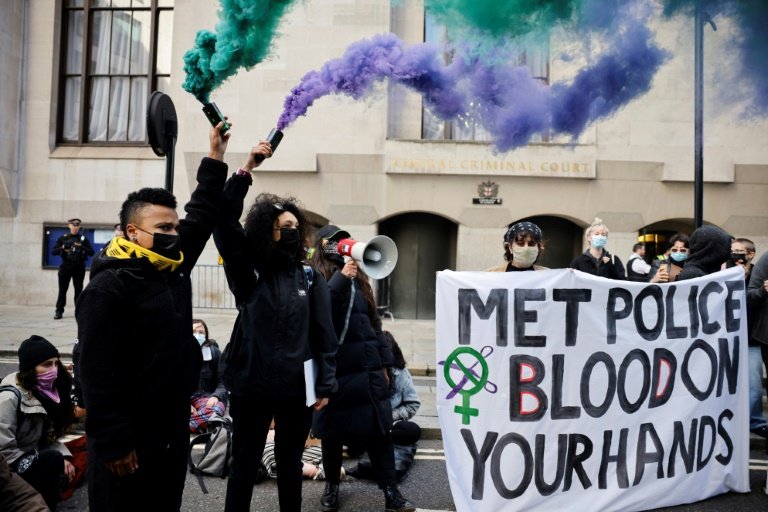 In that case, detectives were accused of not taking their disappearance seriously, and two officers were suspended for taking crime scene photos and sharing them on WhatsApp.

Demonstrators outside the Old Bailey said the Met, which controversially broke up vigils for Everard for breaching social distancing rules, had "blood on their hands".

Roxanne Tiffany, 20, said: "I think what a lot of women are maybe grasping for is 'we're sorry and this is what we're doing to ensure this doesn't happen again'."

Couzens, who had just finished a 12-hour shift guarding the US embassy, snatched Everard as she walked to her home in Brixton, south London, from a friend's house in nearby Clapham on the evening of March 3.

He showed her his warrant card, then used his police handcuffs to restrain her, before driving her in a hire car to Kent in southeast England, some 80 miles (128 kilometres) away. 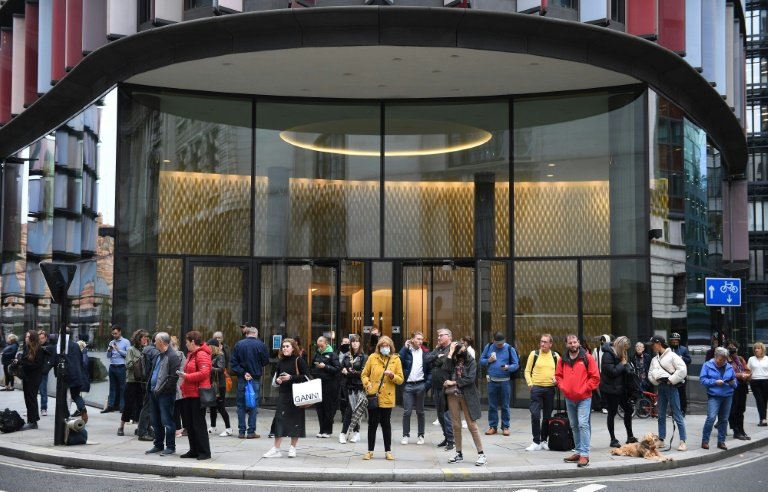 Couzens was sentenced at the Old Bailey in central London / © AFP

The married father-of-two initially told officers he had been forced to seize the university graduate and hand her over to a Romanian gang to whom he owed money.

But he later told a psychiatrist he had used his police belt to strangle Everard, then set her body on fire. Her remains were found in woods a week after she disappeared.

Everard's former boyfriend said she was "savvy and streetwise" and would not have got into a car with a stranger except "by force or manipulation".

"The fact she had been to a friend's house for dinner at the height of the early 2021 lockdown made her more vulnerable to and more likely to submit to an accusation that she had acted in breach of the Covid regulations in some way," prosecutor Tom Little said.