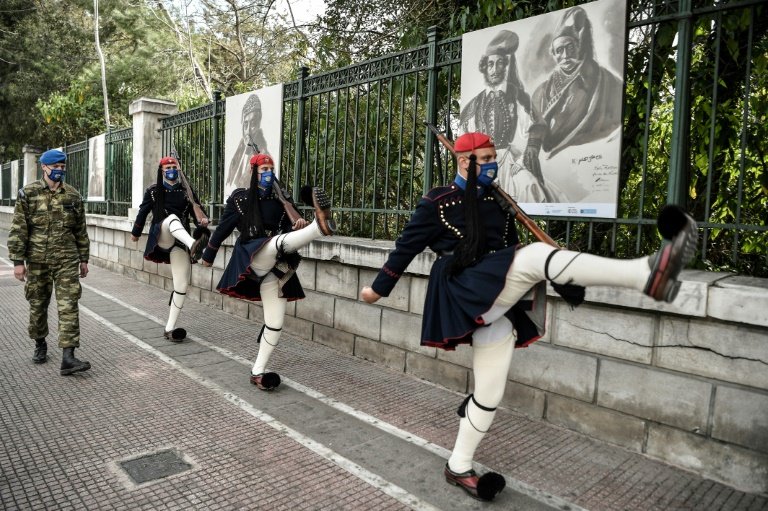 Greece will next week celebrate the 200th anniversary of the uprising that created its modern state, a romantic revolution that experts say captivated both elites and the masses around the world.

A national parade alongside Athens' central Syntagma Square on March 25 -- the date traditionally associated with the revolution -- will feature mounted troops in traditional costumes from the 1821 conflict and the 1912-13 Balkan Wars.

Nations who helped the Greeks in their near-decade-long struggle against the Ottoman Empire will also be represented.

Russian Prime Minister Mikhail Mishustin and Prince Charles of Britain and his wife Camilla will be in attendance, the Greek prime minister's office said.

A new coronavirus lockdown forced French President Emmanuel Macron to pull out, but French Rafale and American F-16 jets will overfly the Greek capital, while the USS Eisenhower aircraft carrier will dock in Crete, a defence ministry source told AFP.

France has also loaned Greece an 18th-century tapestry of Raphael's Renaissance masterpiece The School of Athens, the French embassy said.

With passion for Classical Greece mounting among European elites through the 17th and 18th centuries, "providing aid to modern Greeks came to be seen as a 'duty' of Europeans, as the only possible way of repaying Greece for its contribution to the birth of occidental civilisation," said Konstantina Zanou, a Mediterranean Studies specialist at Columbia University.

Poet Percy Bysshe Shelley wrote in his 1821 verse drama 'Hellas' that "our laws, our literature, our religion, our arts have their root in Greece. But for Greece... we might still have been savages and idolaters".

In decline and distracted by war in Persia and an Albanian governor's rebellion in northwestern Greece, in 1822 the Ottoman Empire sent an army that was decimated by the rebels, who took control of the entire Peloponnese peninsula through use of guerrilla tactics.

The Friendly Society, a secret group of Greek expatriate merchants and intellectuals, had earlier helped organise the uprising with clandestine meetings and funds.

The Greeks were a disparate mix of regional chiefs, ex-bandits, warrior priests and veterans with prior experience in Ottoman-funded militias and British, French and Russian armies, including many of Albanian origin.

By 1823, competing aims among the rebels' civilian and military leaders resulted in open civil war, and an 1824 invasion by the Ottoman vassal state of Egypt nearly extinguished the revolution.

Sensational newspaper reports and visceral works by prominent artists such as Eugene Delacroix and Peter Von Hess fanned the flames.

Hundreds of volunteers in what became known as the Philhellenic movement also followed the example of romantic icon Lord Byron, who funded his own band of fighters before dying in the besieged town of Messolonghi in 1824.

"Marathon looks on the sea; And musing there an hour alone, I dream’d that Greece might still be free," Byron wrote in his 1819 poem Don Juan.

"Many went there with Pausanias and Plato under their arm," she adds.

The Ottomans' naval defeat to the British, French and Russians at Navarino in October 1827, followed by a second Russian victory two years later, prompted the Sultan to sign the 1830 Protocol of London that recognised Greece's independence.

"By establishing Greece as a state of Christians...(the great powers) were determining that the Balkans were the new boundary of Europe," notes Yanni Kotsonis, professor of history at New York University's Jordan Center.

What's more, Greek sovereignty was an "innovation" compared with the post-Napoleonic Wars settlement in Europe, said Ada Dialla, associate professor of European and Russian history at the Athens School of Fine Arts.

"For the first time the great powers clearly defined - however reluctantly - and connected a particular population (and not only a religious minority) with sovereignty," she said.

The old hierarchy would again grapple with the issue in the European revolutions of 1848 and the struggle for Italian and German unification, notes Dialla.

"In this sense the Greek Revolution was instrumental in defining, or rather in redefining the confines of Europe," she argues.