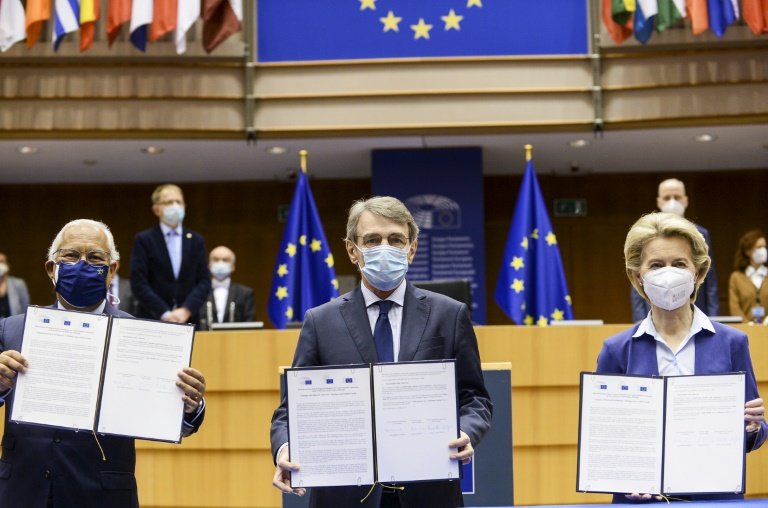 The EU launched a huge consultation on the future of what is still called the European "project" Wednesday, hoping to move the debate beyond Brussels and across the continent.

The Conference on the Future of Europe arrived a year later than planned, delayed by a global pandemic and squabbling over who would lead it and how it would be organised.

But European Commission President Ursula von der Leyen struck an upbeat tone, promising that the resulting debate would be open to opinions from across the 27-member bloc.

"This Conference on the Future of Europe is not just another conference for what some call the 'Brussels Bubble'," she said at a low-key launch in a European Parliament under anti-virus rules.

The three institutions -- the European Commission, the parliament and council of member states -- will jointly chair the process after efforts to appoint a single president were blocked.

MEPs could have chosen former Belgian prime minister Guy Verhofstad for the role, but some national capitals deemed him too "federalist" -- a supporter of a future united European super state.

So have Brussels' existing power centres settled the debate in advance? The leaders insist not, but they have certainly built a carefully balanced governance structure for the conference.

The three institutions will each supply three representatives and up to four observers to the conference's "executive board".

The set-up has already been derided by some sceptics as a talking shop, but others argue that it is time for Europe to step back and think about its post-pandemic direction.

"There is a need to talk very frankly about the future of Europe," said analyst Janis Emmanouilidis of the European Policy Centre.

The conference, he suggested, would keep pressure on the member states to follow through on the EU's plans for a green recovery and a digital economic transformation.

But the greatest dangers, he warned, would be if the conference disappoints the public and if member states do not drive national debates to feed into the Brussels discussions.

"If they feel that the Conference is a fig leaf, just pretending to have a discussion which in the end won't lead to concrete results, there is a danger that people will get frustrated -- citizens but also organised civil society," he said.

The year-long conference may not generate the same level of engagement across Europe.

France's President Emmanuel Macron has been a supporter of the plan and his government will take over the rotating presidency next year in time to help steer its conclusions.

Macron will also be running for re-election and will not want to be associated with a failure. Eric Maurice of the Schuman Foundation dubbed this "a positive element to obtain concrete results".

Some member states, like Ireland and Denmark, have a tradition of public engagement in politics.

But the governments of Hungary and Poland, despite high levels of public support for EU membership, regularly clash with Brussels and may not want what Emmanouilidis calls "honest debate".

A survey for the initiative conducted by Kantar found 51 percent of citizens have some interest in taking part, with the Irish and Belgians the most positive and the Portuguese and Bulgarians the least.

Once all the consultations are done, propositions for reform and action will be submitted -- a process that recalls a 2002 convention under former French president Valery Giscard d'Estaing.

That led to a draft European Constitution which ended up being rejected by French and Dutch voters in a bitter memory for Brussels' supporters of an ever-closer union.

The new convention will try to carry voters along with the debate but will be carefully guided from the centre, and any reforms it designs may not require treaty changes and hence avoid dangerous referendums.