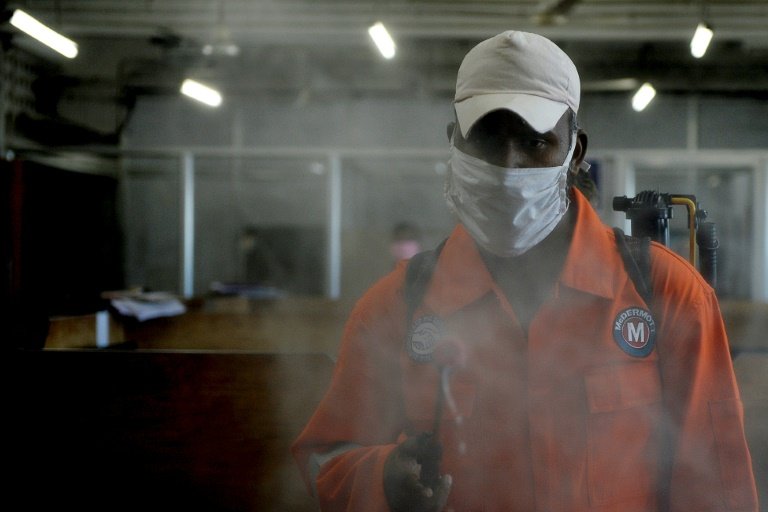 A health worker sprays disinfectant inside government offices in Chennai on June 13, 2020 / © AFP

A lockdown will be reimposed Friday on some 15 million people in the Indian city of Chennai and several neighbouring districts, state officials said, as coronavirus cases surge in the region.

Home to 1.3 billion people, India has been gradually lifting a nationwide lockdown in a bid to get the economy back on track.

But new infections have still been rising across the country -- particularly in Chennai, capital of Tamil Nadu.

It will be in place until the end of June.

The southern state has recorded just over 44,000 cases out of a nationwide total of 332,424, according to official figures.

A majority of the cases are in Chennai, according to media reports, the headquarters of India's huge automotive industry.

Only shops selling essential items and restaurants will be allowed to remain open from early morning until 2:00 pm local time during the lockdown.

The lockdown will be tightened further on Sundays.

The state government also ordered an audit of the number of coronavirus deaths after media reports said at least 200 fatalities were not reflected in the official toll of 435.

India now has the world's fourth-highest number of infections after the United States, Brazil and Russia, according to a tally by Johns Hopkins University.

The South Asian nation has been reporting around 10,000 new cases a day recently.

In major cities such as New Delhi and Mumbai, reports of patients struggling to find hospital beds have triggered speculation about fresh lockdowns being re-introduced there.

In Delhi, mortuaries are overflowing with bodies, and cemetery and crematorium staff say they cannot keep up with the backlog of corpses.

Delhi Chief Minister Arvind Kejriwal, however, insisted Monday there were no plans for a new lockdown.

The metropolis has more than 41,000 infections and 1,300 deaths, making it the third-worst hit state or territory in the country.

The Supreme Court said last week that conditions in the national capital were "horrendous, horrific and pathetic".

India's economy -- Asia's third-biggest and already stuttering before the epidemic -- has been badly hit by the lockdown.

The government has sought to revive growth by allowing most economic activities to resume, including restarting a limited number of domestic flights and interstate trains and buses.