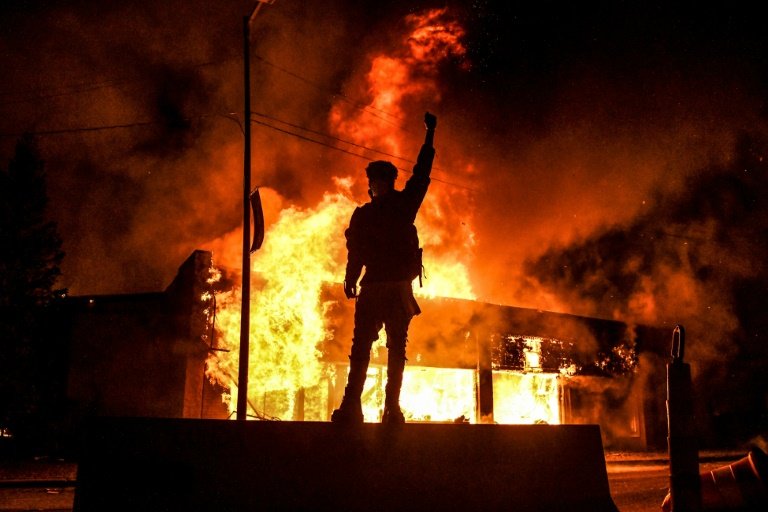 Flames light up the skyline and the smell of acrid smoke fills the streets in a Minneapolis neighborhood rocked by protest, a few hundred meters from a besieged police station.

"The real reason we're here is because the police keep killing black folk all around the United States," says a young African American man who declined to be named.

His face covered by a mask -- whether because of the coronavirus or to protect against tear gas it's not clear -- he says he came to protest peacefully on Friday with friends, despite a curfew imposed after three nights of rioting.

And as flames from a bank lick upwards nearby, the young man explains the anger seething across the country since the death of George Floyd on Monday at the hands of an officer who pinned him to the ground handcuffed and knelt on his neck for more than five minutes.

"We're in 2020 and we're dealing with the same problem that we were dealing with in the 60s... it looks like Minneapolis finally reached that breaking point"

"George Floyd isn't the first," adds Jerry, 29, who is white. "What are you supposed to do, just sit back and take it?"

More than a thousand people died after being shot by police last year in the US, according to The Washington Post. Black people are overrepresented in police shootings and condemnation is rare.

In Floyd's case, the officer shown kneeling on his neck in footage of the incident was charged Friday with third degree murder -- unintentionally causing a death -- and negligent manslaughter.

Floyd's family wants the other three officers at the scene to be charged as well.

In Minneapolis Friday night, helicopters flew overhead as protesters faced off against police and explosions echoed through the streets.

"It's scary but necessary at the same time," says one young student, "sometimes things need to get bad before getting better."

Others, however, are not so sure: "They are making it worse, they give them (the police) a reason to shoot us", says thirty-four-year-old Phae, a black woman who lives nearby and is clearly exhausted.

"I sympathized completely but I don't want to lose all my stuff," says a young woman who lives above a barricaded shop and is scared it could be set on fire.

The local authorities were conciliatory in the first days of the protests, but have since called in the National Guard and stiffened their tone.

"There is no honor in burning down your city," said the mayor of Minneapolis, Jacob Frey, at an improvised news conference held shortly after midnight. "It needs to stop."