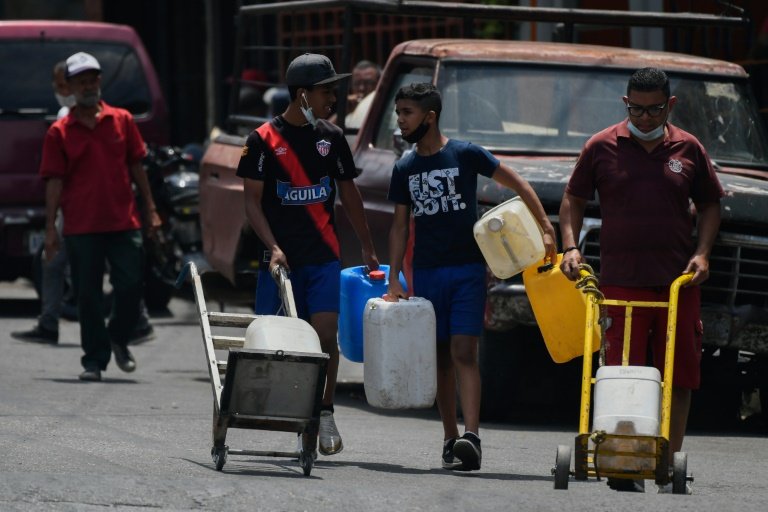 A man carries water in Caracas May 19, 2020 amid the coronavirus pandemic / © AFP/File

Venezuela's low case count and death toll from the coronavirus are likely false and could in fact end up being thousands of times higher, according to the Human Rights Watch (HRW) and Johns Hopkins University.

President Nicolas Maduro's government has reported 10 COVID-19 deaths out of 1,121 cases in a country of 30 million people, numbers a report from the HRW and Johns Hopkins calls "absurd."

"We believe the data -- the statistics that the Venezuelan government give, Maduro's statistics -- are absolutely absurd and are not credible," HRW director for the Americas Jose Miguel Vivanco said during a videoconference Tuesday while presenting the report.

The true number could ultimately be closer to "at least 30,000" coronavirus deaths, according to Johns Hopkins associate medicine professor Kathleen Page, who interviewed several Venezuelan doctors and nurses for the report.

Vivanco said the idea of so few cases and deaths "in a country where doctors don't have water to even wash their hands" and "the health system is totally collapsing" strains credibility.

Page said the Venezuelan government reports having completed more than 300,000 coronavirus tests, but that the tests they use are known for returning a high percentage of false negatives.

She instead projects that 1 percent of the population -- or about 300,000 people -- might ultimately end up being infected.

Given available information about the novel coronavirus death rate in other countries, it is possible to conservatively estimate that 30,000 of those infected in Venezuela will die, Page said, especially since the health infrastructure there is so fragile.

"One of the surgeons told me they have to wash their hands from water that falls from the air conditioning," she said.

Venezuela, once a wealthy oil-rich country, has been devastated by an economic and political crisis that has seen many flee the country and left those that remain often without basic necessities.

Vivanco slammed the government as a "repressive dictatorship" that doesn't allow journalists and medical personnel to report the facts on the ground and instead "hides data."