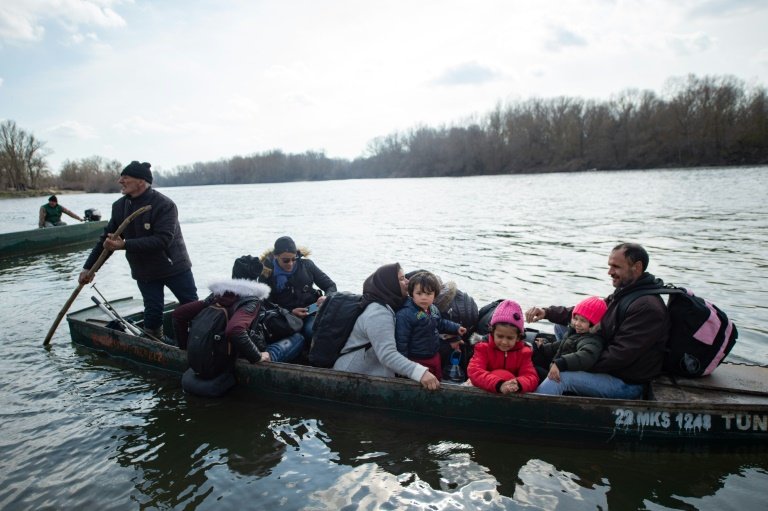 The EU dispatched its highest officials to Turkey and Greece Tuesday, as concern grew over a fresh migrant crisis and accusations that Ankara was trying to "blackmail" the bloc by opening its borders to thousands of refugees trying to reach Europe.

Rights groups accused Turkey of using migrants as bargaining chips by pushing them towards the Greek border. But they also condemned Europe for failing to provide greater assistance.

Thousands have arrived at the frontier since President Recep Tayyip Erdogan announced last week that Turkey would no longer stop them trying to enter Europe.

After clashes with Greek police at the official crossing over the weekend, migrants said they were being dispersed along the narrow Evros river, called the Maritsa by the Turks, that separates the two countries. 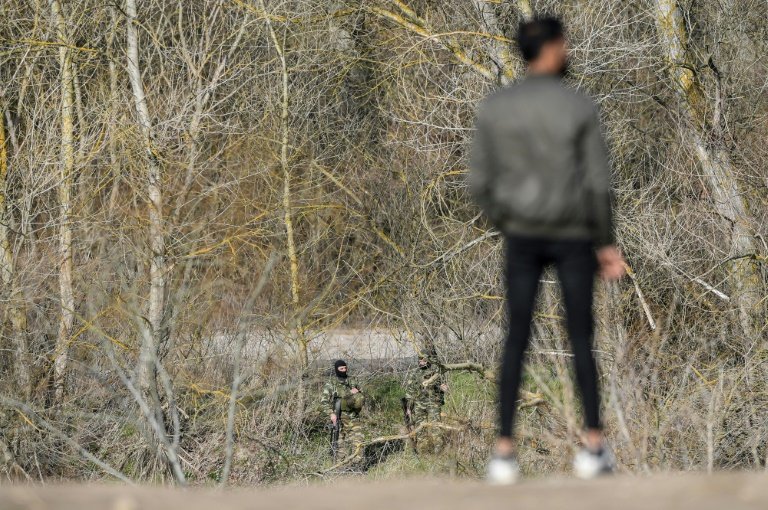 Some Syrians claimed they were being forced to cross by the Turkish army.

"They let us go by the river and just told us: 'Go!' It was the Turkish army," 23-year-old Taisir, originally from Damascus but living in Istanbul for the past five years, told AFP.

Braced against the winter cold, many wandered the fields looking for a safe space to cross after emerging from makeshift tents.

They have faced tear gas and stun grenades from Greek police, while unconfirmed videos appeared to show coastguards firing warning shots and beating migrants packed on to boats.

Many migrants said they had been forced back by the Greek police.

"Yesterday evening, I crossed with 200 people in small groups," said Mohammad Yasin, a 22-year-old Syrian refugee, in the Turkish city of Edirne near the Evros river.

"We were all caught by the Greek border guards who sent us back. They took my phone, my money and even my shoes."

Erdogan claims "millions" of refugees could soon be heading to the European border, but this is widely seen as a bid to pressure EU leaders into greater support for Turkey's fight against the Syrian regime.

Turkey already hosts some four million refugees and faces another huge influx from Syria. The Damascus regime, backed by Russian air power, is pressing a major offensive to retake the last rebel-held province of Idlib. 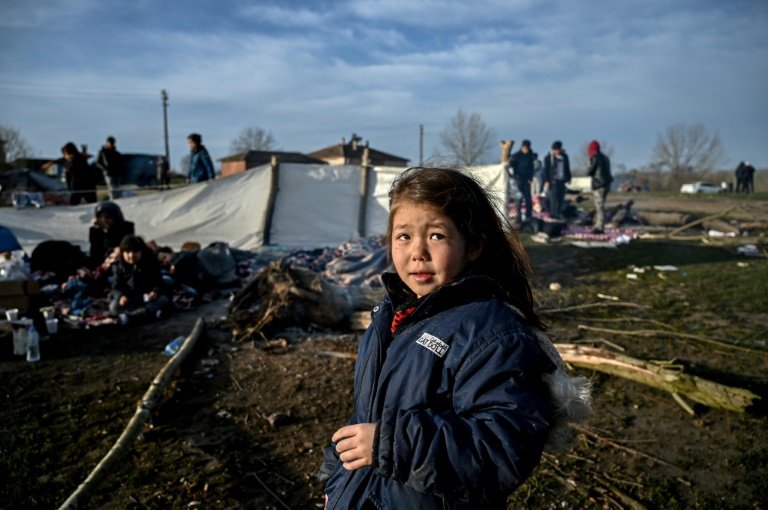 Visiting Ankara, British Foreign Secretary Dominic Raab said: "We need to remember in this scenario the first and overriding responsibility of the suffering is the Syrian regime... It is the regime in Syria, backed up by Russia causing this."

European leaders have nonetheless insisted Turkey abide by a 2016 deal to stop migrant departures, but Ankara says the EU has failed to meet several promises under the deal, including visa-free travel, an upgraded customs union and voluntary resettlement of refugees. 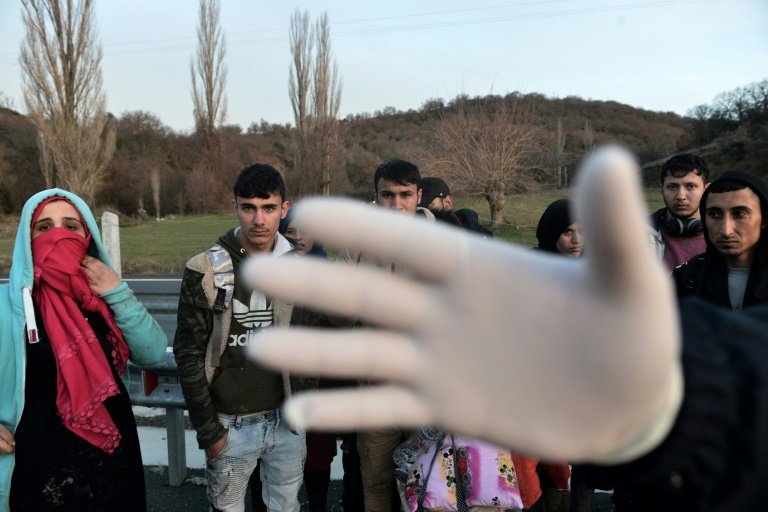 The EU's top diplomat Josep Borrell will spend two days in Turkey for "high-level" meetings on the Syrian crisis and the migrant row.

They met Greece's Prime Minister Kyriakos Mitsotakis, who has called for "strong support" from Brussels.

"Those who seek to test Europe's unity will be disappointed. We will hold the line and our unity will prevail," von der Leyen said.

Rights groups meeting in Istanbul said: "Migrants should not be used as a negotiating tool and the government should stop directing them to unsafe crossing points."

But they also criticised Europe for "endangering the lives of hundreds of thousands of migrants" by closing its borders.

Tensions have soared in Syria's Idlib, where Turkey launched an operation last week in a bid to push back the regime's assault.

Close to one million people have fled the Syrian advance -- the biggest displacement in the nine-year conflict -- though they are currently barred from entering Turkey. 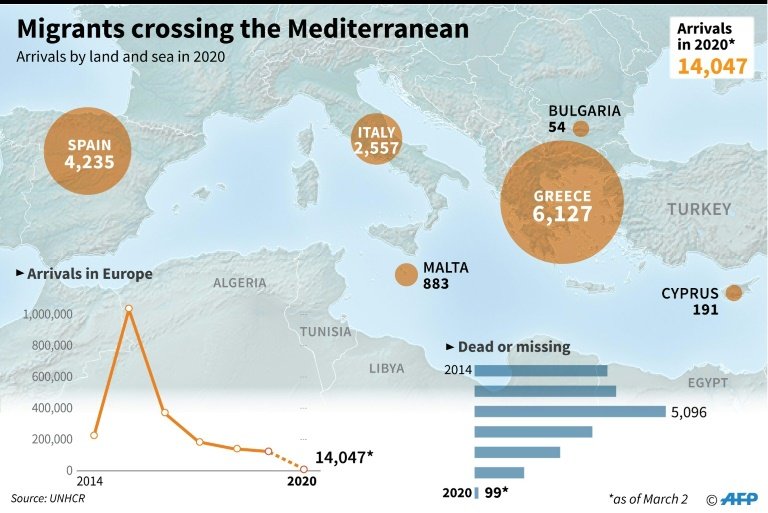 A delegation from Washington, including Syria envoy James Jeffrey and UN ambassador Kelly Craft visiting the Syria border in a show of support to NATO ally Turkey.

Jeffrey said the US would provide increased supplies to Turkey and was considering requests for military equipment.

"People are struggling to survive in horrific conditions. They are traumatised, cold and many have no choice but to sleep in the open," said UN relief coordinator Mark Lowcock, visiting southern Turkey.

Erdogan said Monday he hoped for a fresh ceasefire when he meets his counterpart Vladimir Putin in Moscow on Thursday.