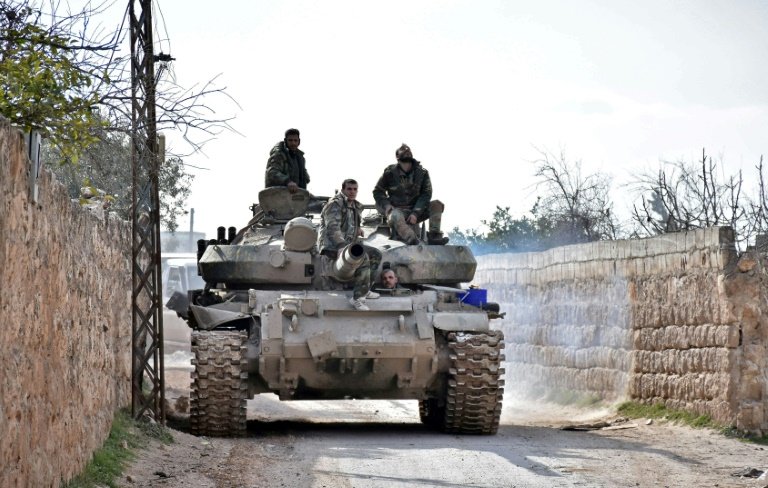 Syrian troops advance through Idlib province towards Saraqeb, a strategic crossroads town long in the sights of government commanders / © SANA/AFP/File

The Syrian army took control of a strategic northwestern crossroads town on Saturday, its latest gain in a weeks-long offensive against the country's last major rebel bastion of Idlib.

The advance on Saraqeb came shortly after Turkey sent additional troops into the region and threatened to respond if its military observation posts in Idlib, set up under a 2018 truce, come under attack.

Since December, government forces have pressed a blistering assault against the Idlib region with Russian support, retaking town after town despite warnings from rebel ally Turkey to stop.

The violence has killed more than 300 civilians and sent some 586,000 fleeing towards relative safety nearer the Turkish border. 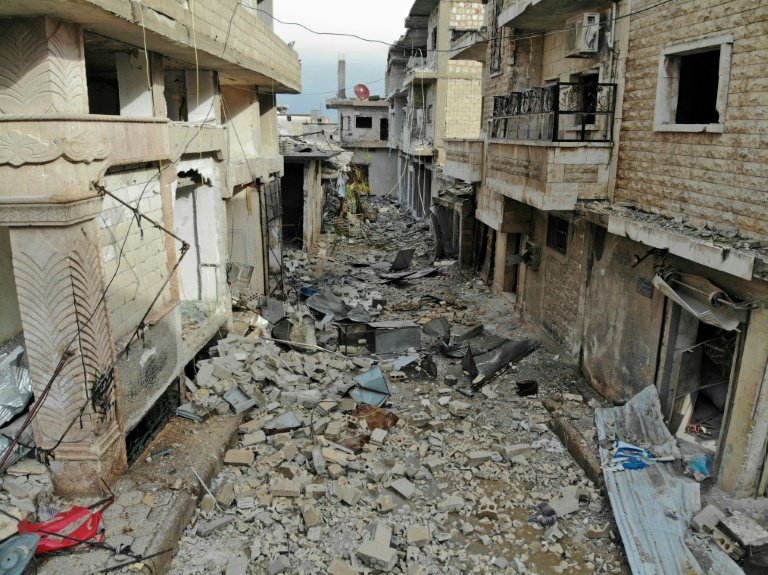 The United Nations and aid groups have appealed for an end to hostilities, warning that the exodus risks creating one of the worst humanitarian catastrophes of the nearly nine-year war.

But President Bashar al-Assad's forces have continued their advance.

Saraqeb is a strategic prize for the government as it seeks to regain control of the M4 and M5 highways that meet in the town.

The Britain-based Syrian Observatory for Human Rights said Friday that government forces were in control of the whole of the M5 in Idlib province.

Only a 15 kilometre (9 mile) section, southwest of Aleppo city, remains in rebel hands.

The regime was poised to recapture more of the road on Saturday after it overran the area of Al-Eis in south Aleppo province following battles with rebels and jihadists, according to the Observatory.

Al-Eis, which overlooks the M5, was on a front that saw fierce fighting between the regime and its opponents in 2016.

The two units had recently waged separate battles in rural Aleppo and southern Idlib, but are now conjoined for the first time as they push north along the M5 highway. 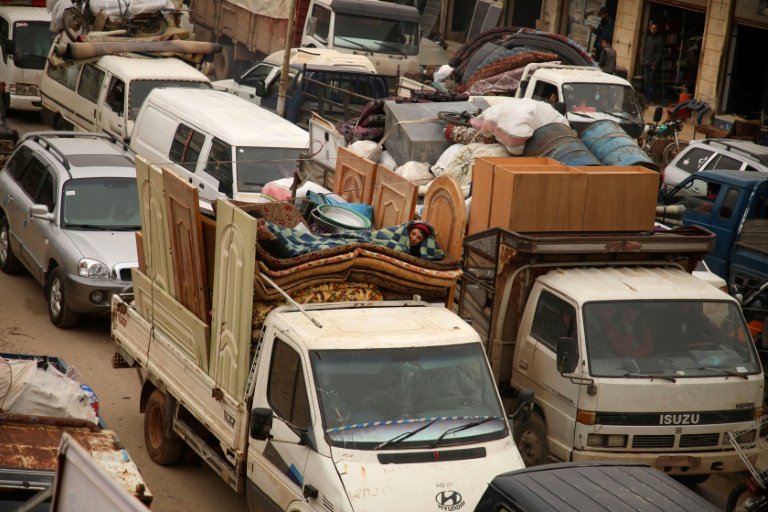 The fighting in Idlib province has sent hundreds of thousands of fleeing civilians onto the roads, seeking relative safety nearer the Turkish border / © AFP/File

A few months ago, Saraqeb counted some 110,000 residents, the Observatory says.

But weeks of deadly bombardment by the government and its ally Russia has levelled much of the town and sent its inhabitants fleeing north towards the Turkish border.

Some three million people, half of them already displaced by Syria's devastating war, live in the remaining rebel territory.

Some 50,000 fighters are also in the shrinking pocket, many of them jihadists but the majority allied rebels, according to Observatory estimates.

With Saraqeb recaptured, little more than half of Idlib province remains in rebel hands, along with slivers of neighbouring Aleppo and Latakia provinces.

Turkey, which already hosts some 3.7 million Syrian refugees and fears another influx, has called on Damascus to halt its Idlib campaign.

Tensions between them rose on Monday after a rare flare-up between regime and Turkish forces in Idlib killed more than 20 people on both sides.

Turkey has since sent reinforcements into northwest Syria, prompting Damascus to accuse Ankara of trying to hamper its advance.

According to Turkish state news agency Anadolu, Ankara has sent more than 350 vehicles with commandos and ammunition to bolster its observation posts in Idlib since Friday.

A Turkish security source said the troops' sole mission was to reinforce the 12 existing posts, established under a 2018 deal with Russia aimed at preventing a major battle and an ensuing humanitarian crisis.

Turkey says three of its outposts, all in the southeastern part of Idlib, have been surrounded by the Syrian army. 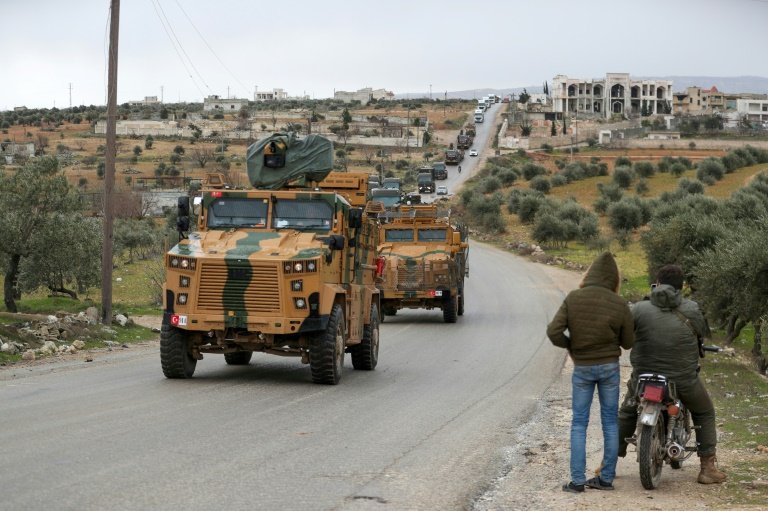 The Observatory said that all the Turkish reinforcements were deployed to outposts behind the front line north of Saraqeb.

Some Turkish troops were seen heading towards a military airport in the Taftanaz area, 16 kilometres (10 miles) north of Saraqeb, said an AFP correspondent.

Others were deploying to a military base south of Idlib city.

Turkey has threatened to respond if any of its posts come under attack.

"Our observation posts in Idlib continue their duties and are capable of protecting themselves with the weapons and equipment they possess," the Turkish defence ministry said on Twitter.

"In the event of a new attack, proper response will be given in the strongest manner, based on the right of self-defence."