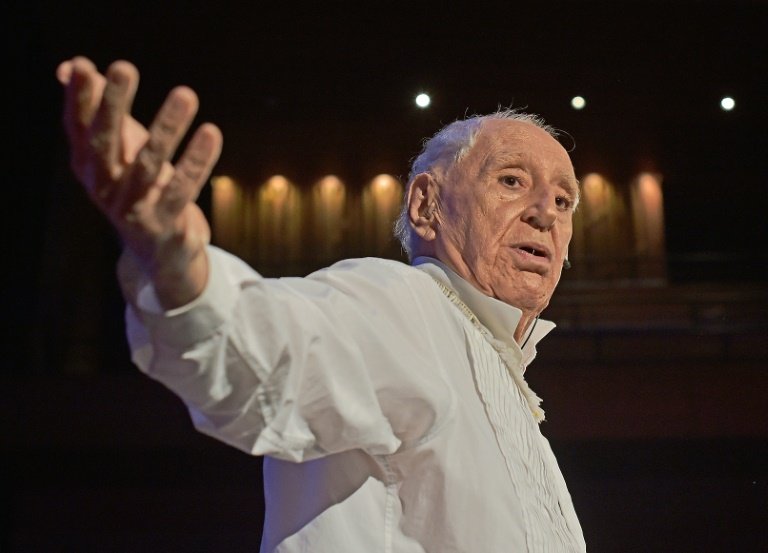 Dressed in white and with hands raised in the air, Ze Celso crosses the stage, already reveling in the boisterous performance his troupe is about to deliver: at 82, this legend of the Brazilian stage still believes in the virtue of insurrection.

He founded his theater company Teatro Oficina 61 years ago and it became an icon in the years of Brazil's military dictatorship between 1964 and 1985. Despite the years, both Ze Celso and the company are still going strong.

To stage their performance of "Roda Viva" ("Living Circle"), written by singer-songwriter and playwright Chico Buarque in 1968 and mixing dance, song, theatre and video, the 60-strong troupe had to rustle up buses to transport them for free from Sao Paulo to Rio, where they bunked up at friends' places and paid the costs of putting on the show through crowdfunding donations.

From the outset, "there were a thousand problems, but the thing is to resist," says Jose Celso Martinez Correa, better known as Ze Celso, in an interview with AFP. "I have insurrection in the blood."

In 1968, "militiamen from the commando group hunting down communists launched a police operation" against the performance of "Roda Viva," says Ze Celso.

"They stormed the theater, and even ran into the dressing rooms to beat up the performers," he recalls.

These days, "we have no support from the government, our financial situation is precarious and we have been fighting for 40 years" against a real-estate development that threatens to suffocate their theater.

Silvio Santos, a business tycoon and head of SBT television, wants to surround the Teatro Oficina -- designed by renowned architect Lina Bo Bardi -- with apartment blocks that would block off all natural light to the open-plan, modernist building.

"I'm 82, I was tortured and then exiled by the military dictatorship," says Ze. "But what we are living through now is actually worse: I have never seen so much ignorance and hate."

Yet the experimental theater has managed to escape the censorship and pressure on cultural centers by the far-right administration of President Jair Bolsonaro, and "Roda Viva" has been running for nearly a year now in Sao Paulo.

"In reaction (to Bolsonaro), our culture is very strong", says Ze Celso. "The theaters are full, the artists are vibrant. All of Brazil's culture is rising up!" 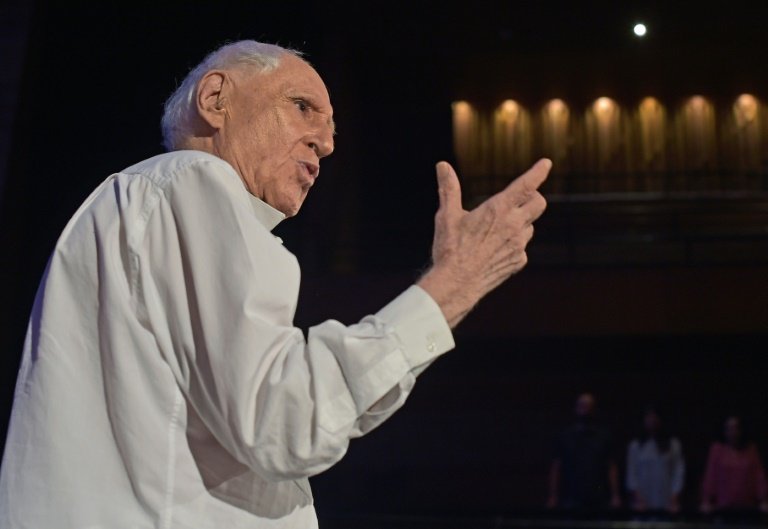 Roda Viva, originally during Brazil's military dictatroship in 1968 by the legendary musician Chico Buarque, has been updated to featue imagery of recent events including the fires in the Amazon, former President Lula's release and a mockery of Brazil's current President, Jair Bolsonaro / © AFP

That is certainly the case with "Roda Viva," which is by turns burlesque, comic and sarcastic, and which Ze Celso describes as a "tragi-comedy" performed at a frenetic pace. It follows the antics of popular singer Benedito Silva and his "guardian angel," who asks for 20 percent of the singer's earnings.

Benedito becomes pop hero Ben Silver, who morphs into Benedito Lampiao, the name of a mythical insurgent in Brazilian culture, under the diktat of show business.

The "Roda Viva" of 2019 is deeply anchored in contemporary Brazilian politics, featuring a Bolsonaro with Hitler moustache and hair, and who declares his love for US President Donald Trump. The Brazilian president's image appears on the video screen to boos and jeers from the audience.

By contrast, the audience is urged by the ensemble -- sometimes in pressing tones -- to join them in applauding former president Luiz Inacio Lula da Silva, the leftist who was in jail on corruption charges during the last election.

As the dancers climb the rows of theater seats, Ze Celso stretches out on the laps of three audience members, and at the end of the show, performers and audience all dance together on the stage.

The show touches on every aspects of contemporary Brazil: the fires in the Amazon, the corruption allegations swirling around Bolsonaro's son Flavio, the mantras of the president's "guru" Olavo de Carvalho, the invasion of indigenous lands and the hysterical sermons of Evangelical leaders, as well as the easing of gun controls and the mass use of pesticides in agriculture.

Ze Celso, 82, gets ready backstage before a performance of Roda Viva in Rio de Janeiro: when it was originally staged during the dictatorship, police stormed the theater and beat up the performers / © AFP

Meanwhile, the onscreen projections mock the official line on events: "120 percent of the world has a good opinion of Brazil," and "the Amazon fires are part of our culture."

"I have faith in the force of humanity which is going to mobilize and take to the streets. I think it'll happen soon," he says, as the interview winds up and he stands up and without warning booms, "Shit!"

The play is about to begin.