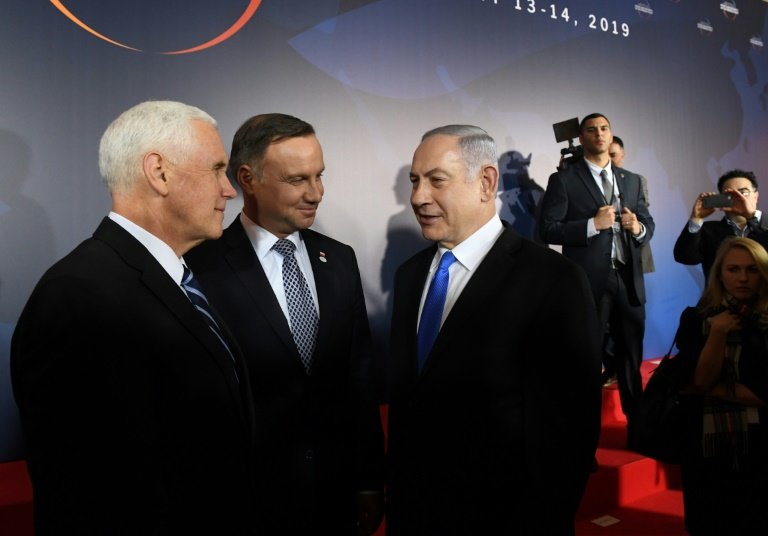 US Vice President Mike Pence, Poland's President Andrzej Duda and Israeli Prime Minister Benjamin Netanyahu (left to right) speak at the opening of a conference on the Middle East in Warsaw / © AFP

US and Israeli leaders gathered Wednesday in Warsaw for a conference they hope will pile pressure on Iran, just as the country's elite Revolutionary Guards were hit by one of the deadliest attacks in years.

Opening with a dinner at the Royal Castle in Warsaw's old town, the two-day meeting looks to promote a US-led vision of the Middle East but is as notable for its absences as its attendees.

Israeli Prime Minister Benjamin Netanyahu and US Vice President Mike Pence will headline the conference Thursday but few prominent European officials have come amid unease with the strident US line on Iran.

Just as talks were getting underway, a suicide car bombing in southeastern Iran killed 27 troops of the elite Revolutionary Guards who were returning from patrol, according to the force.

Iran quickly linked the attack to the Warsaw conference, where supporters of the formerly armed opposition were rallying in the streets.

Dubbing the meeting in Poland the "WarsawCircus", Iranian Foreign Minister Mohammad Javad Zarif said it was "no coincidence that Iran is hit by terror on the very day" that the talks began. 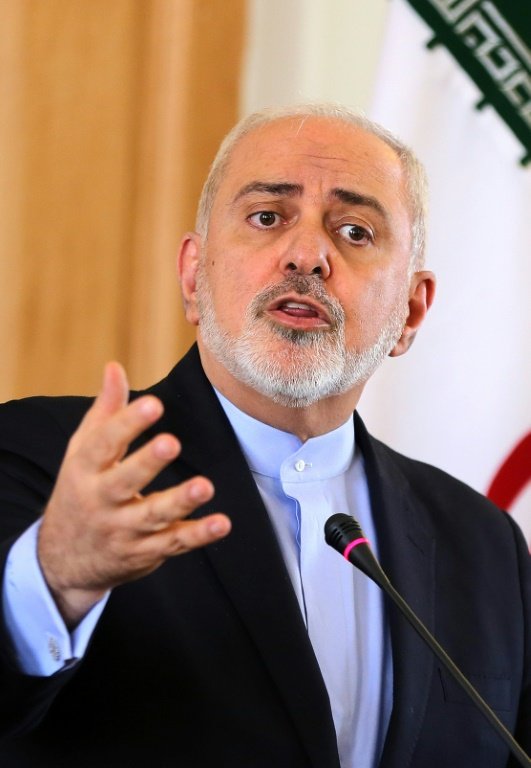 But an extremist group from the Sunni Muslim minority claimed responsibility for the attack in the volatile southeastern Baluchistan region bordering Pakistan.

Sunni militants were also held responsible for a major assault on a military parade in southwestern Iran in September.

The latest violence as well as the conference come just as the Shiite clerical regime was celebrating 40 years since the Islamic revolution that overthrew the pro-US shah.

- Growing US pressure on Iran - 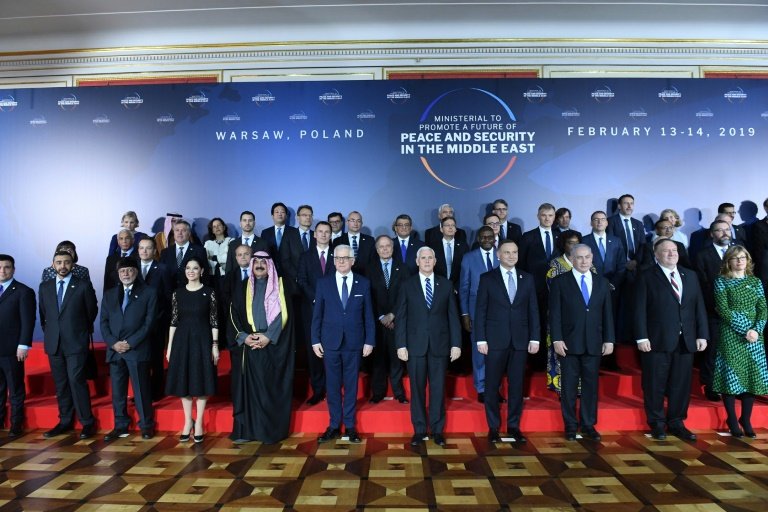 Iran has been comparatively stable in a turbulent region in recent years. But President Donald Trump has boasted of growing unrest and economic insecurities after he slapped on biting sanctions.

Trump walked away from what he called a "terrible" 2015 deal negotiated by his predecessor Barack Obama in which Iran constrained its nuclear programme in return for sanctions relief.

Outside of the United States, Israel and Iran's Arab rivals, virtually the whole world still supports the agreement, with which UN inspectors say Iran is complying.

Even Poland -- always eager to please the United States as it fears a resurgent Russia -- has gone to pains to say that it still backs the 2015 agreement alongside other European members.

Poland and the United States toned down the conference to a vague goal of seeking stability in the Middle East without specifically mentioning Iran.

Netanyahu has been unflinching in his criticism of Iran's leaders, who do not recognise Israel's right to exist.

Speaking as he headed to Warsaw, Netanyahu said that Israel launched new military strikes Monday against Iranian-linked sites in Syria, where the Jewish state is adamant about eliminating the presence of Tehran and its ally Hezbollah. 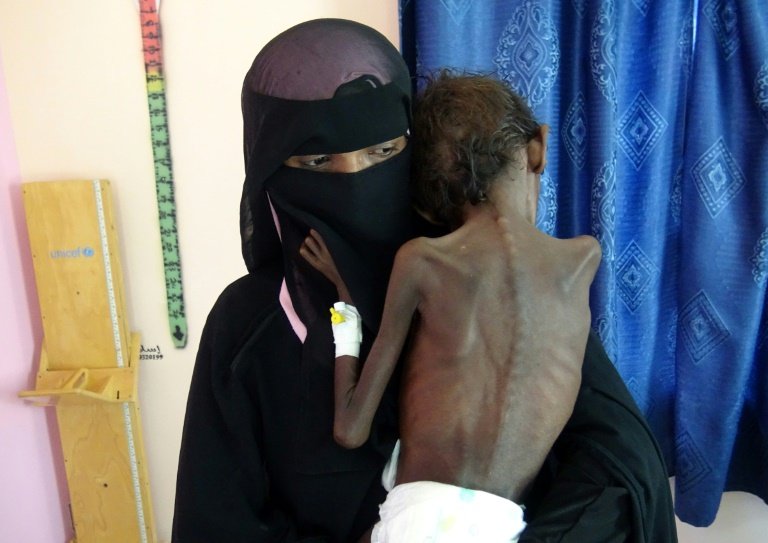 The sole senior official from a major European power to attend is British Foreign Secretary Jeremy Hunt, who said he wanted to focus on ending the crisis in Yemen.

Several million Yemenis are on the brink of starvation and the country has suffered one of the worst cholera outbreaks in modern times as Saudi Arabia and the United Arab Emirates -- backed by the United States -- seek to bomb and blockade Iranian-linked Huthi rebels into surrender.

Hunt -- whose country is also a major arms supplier to Riyadh -- met Tuesday evening in Warsaw jointly with US Secretary of State Mike Pompeo and senior officials from Saudi Arabia and the United Arab Emirates.

In a joint statement, the four countries said they hoped to expand on a seven-week ceasefire that has largely held in the crucial port city of Hodeida but accused the Huthis of presenting obstacles.

"The ministers agreed that there is a window of opportunity to end the conflict in Yemen and to redouble their efforts to reach a political solution," they said. 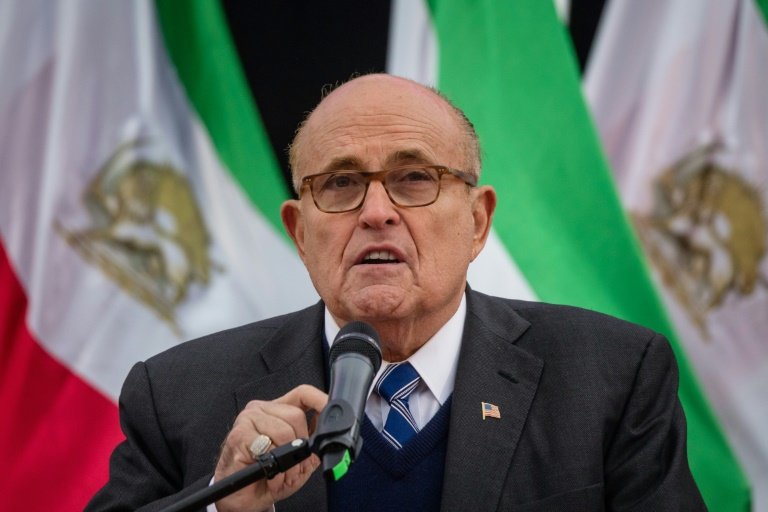 Former New York mayor Rudy Giuliani speaks during a rally in Warsaw of supporters of the National Council of Resistance of Iran, demanding tougher policy on Iran / © AFP

The Trump administration has insisted that it wants changes in Iran's policies in the Middle East but that it is not looking to topple the regime.

Yet former New York mayor Rudy Giuliani -- who serves as Trump's personal lawyer but does not represent the US government -- openly called for regime change at a rally in Warsaw with Iran's exiled opposition.

"We shouldn't be doing business with a nation that supports terrorism," Giuliani told the rally of the People's Mujahedin, a formerly armed group close to US conservatives that was classified by Washington as a terrorist movement until 2012.

"I know we're united in that we want to see a regime change in Iran, so that there's a regime that is democratic, that's lawful," Giuliani said.