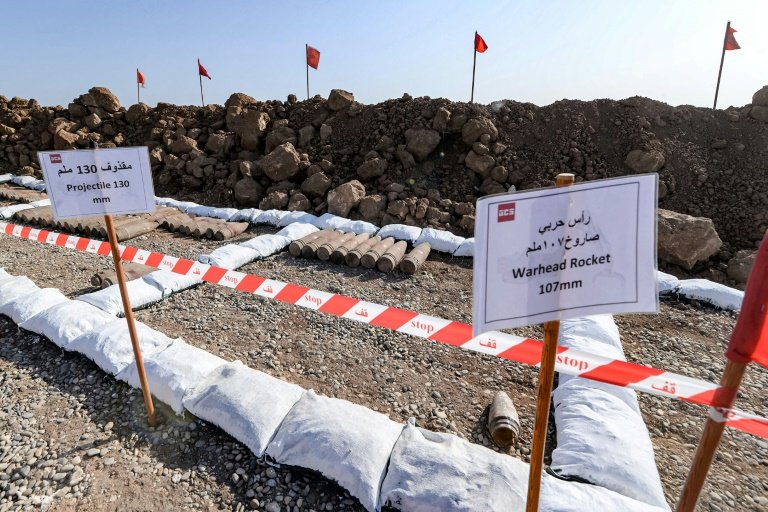 In the northern Iraqi hamlet of Hassan-Jalad, almost every family has a story to tell about a time when a child, nephew or brother was lost to wartime munitions.

Located near Mosul, a former stronghold of the Islamic State (IS) jihadist group, the area is littered with unexploded ordnance, sometimes dubbed UXO.

"We are afraid for the children," said one local man, Awad Qado. "We show them the routes to take, the places to avoid. We tell them not to pick up things they find on the ground."

It was in 2017 that Qado's family was struck by a landmine explosion in the hamlet of about 50 homes. 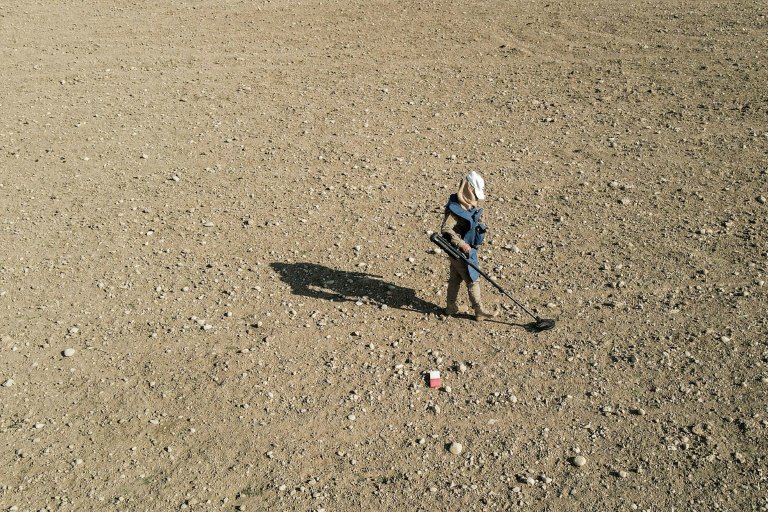 A metal detector searches for unexploded munitions north of Mosul, a former stronghold of the Islamic State (IS) jihadist group, in an area littered with unexploded ordnance / © AFP

Two of Qado's nephews were killed while tending to their herd. His son was injured and a fourth man's legs were severed in the blast that also killed some livestock.

Across Iraq, about 100 children were killed or injured between January and September as a result of remnants of conflict, according to the UN.

In a country that has one of the world's highest UXO "contamination rates", almost one in four people is exposed to risk from unexploded ordnance, say non-governmental groups.

Iraq's successive conflicts have left a deadly legacy, from the Iran-Iraq war of the 1980s, to the US-led invasion of 2003 and the defeat of IS in late 2017. 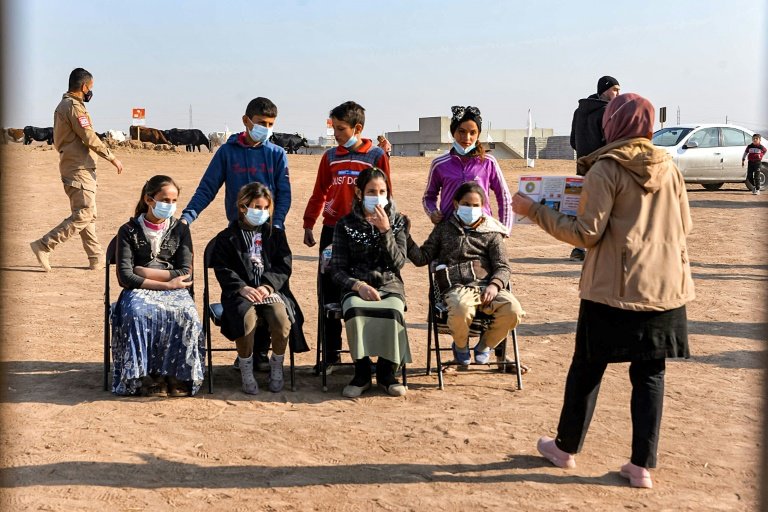 An instructor from global Clearance Solutions (GCS) gives a workshop to children on how to report suspected cases of landmines and unexploded munitions, which have proven deadly for youngsters across Iraq / © AFP

In the area around Hassan-Jalad, more than 1,500 explosives were found within one year, said Alaa al-Din Moussa, head of operations for the private demining company GCS.

"In this region, every house has a story," he added. "Many children are dead. Hundreds of animals have entered fields and triggered explosives."

Clearing the UXO is painstaking and dangerous work.

Ordnance awaiting disposal is left in a desert area behind a banner that reads "STOP". 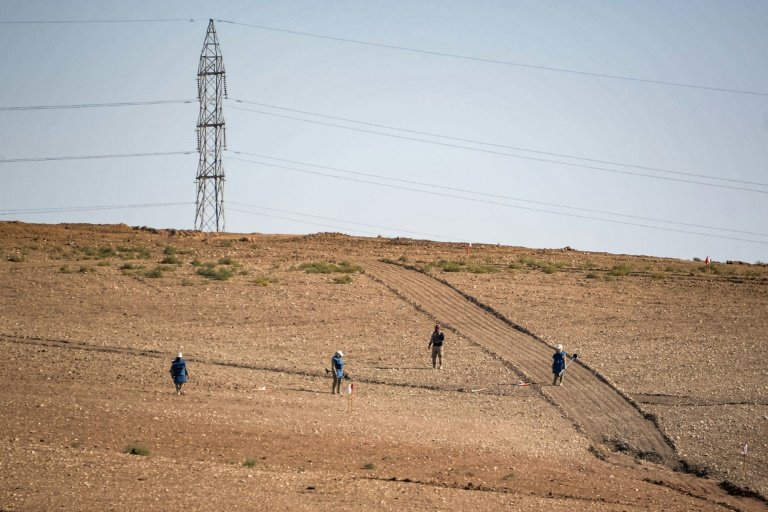 The explosives are classed in several categories including: 107-millimetre rockets, 23-millimetre projectiles and VS500 mines.

Both Mosul and the western province of Anbar are among the most affected areas, as are other former IS strongholds.

"We see a lot of contamination in built-up urban areas," Pehr Lodhammar, programme chief of the UN Mine Action Service (UNMAS) in Iraq, told AFP.

"Explosive hazards and explosive contamination are making it much more difficult for people to return to their homes and to resume a normal life."

More than 1.2 million people are displaced in the country as a result of the successive conflicts.

The fighting has left the borders with Iran, Kuwait and Saudi Arabia littered with landmines and unexploded remnants of war, according to a report by the France-based group Humanity & Inclusion. 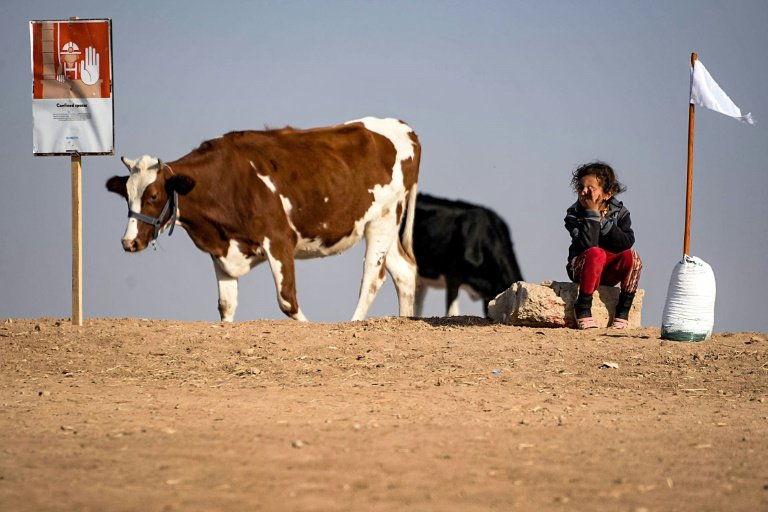 "Iraq is one of the countries most heavily contaminated by explosive ordnance on earth," the organisation said in a report in October.

"A staggering 8.5 million Iraqis live amid these deadly waste-products of war."

A key challenge is raising awareness to allow people to change their behaviour in the face of danger.

As a result of sessions held for children and adults, there have been "success stories", Ghaith Qassid Ali, who helps run GCS's awareness programme in the Mosul area, told AFP. 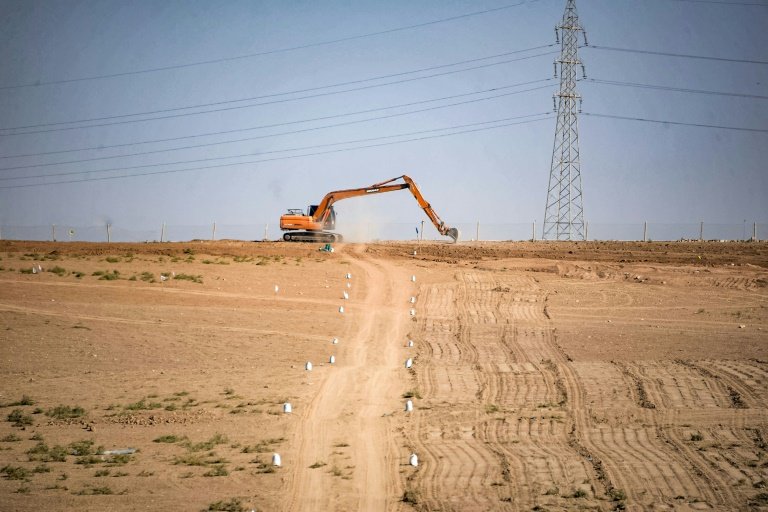 Farmland is contaminated by remnants of war -- here, an excavator ploughs a field as part of the search / © AFP

As a result of the sessions, children playing in a field "saw a projectile, remembered the photos a team had shown them and warned us", recounted Ali.

He said the UXO phenomenon poses major economic challenges: "The majority of inhabitants of this village are farmers, but most of the land is contaminated by remnants of war."

At just 21 years old, Abdallah Fathi is living proof of the tragedy wrought by wartime munitions.

In 2014, he was tending to his herd when a mine exploded. He lost both his legs, his left hand and several fingers on his right hand.

"Before, I used to work, but now I can do nothing, carry nothing, not even cement blocks," he lamented.