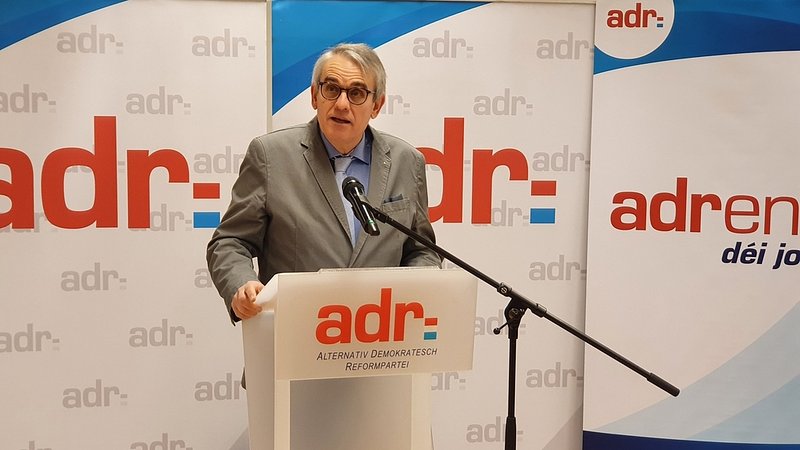 The president of the Alternative Democratic Reform Party (ADR), Jean Schoos, gave the party's annual New Year's Speech on Friday evening and decided to end it on a very personal and emotional note.

Schoos started off by slamming the political decisions of the majority parties.

The party president stated that the current debate about a vaccine mandate should have been conducted last summer. While the ADR is willing to discuss a sectoral vaccine mandate, as the main goal here would be to "protect third parties", the opposition party is against a universal vaccine mandate and for giving people "a choice".

Schoos described the current situation in Luxembourg as "completely absurd", criticising that employers and employees have been forced into a situation "that isn't healthy".

In particular, the party president takes issue with the fact that both the 3G and the 2G+ regime are being used. As an example, Schoos stated that a chef is allowed to prepare food under 3G conditions but is unable to eat it with others in the dining area because of the 2G+ regime that applies there.

Schoos also talked about the constitutional reform, stressing that "the Luxembourgish people have a right to vote on it via a referendum". After all, the ADR politician added, "it was promised".

At the end of his speech, Schoos brought up the statements made by the editor-in-chief of the newspaper 'Tageblatt' during a roundtable discussion on RTL Radio. Dr Dhiraj Sabharwal had described ADR MPs Fernand Kartheiser and Fred Keup as "vile scumbags".

Schoos criticised the statement and added that "the worst thing" for him was that the other journalists who participated in the discussion did not distance themselves from it.

The ADR party president was visibly emotionally upset and went on to tell a story of how a friend of his was murdered two years ago.

According to Schoos, this happened "merely because" this person's father was a member of the supervisory board of a German chemical company that was being accused by the press of having supplied the U.S. military with Agent Orange during the Vietnam War.

Schoos went on to explain that the culprit allegedly prepared the crime for 50 years "on the basis of articles in the press".

Schoos concluded his speech by addressing members of the press directly and stated "you don't realise at all how powerful you are".