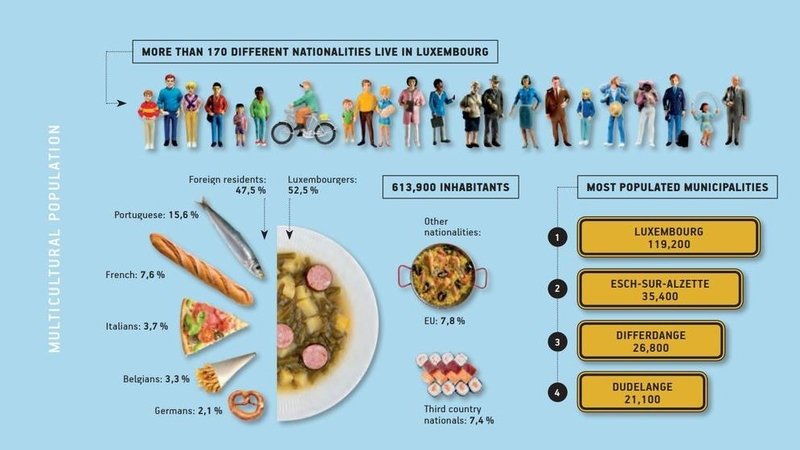 Twitter users have noted that foreign residents are represented by various stereotypical foods. Reactions have not been positive.

Tuesday saw the publication of the government's report "10 Fact Sheets about the Grand Duchy of Luxembourg," which pulls together information on Luxembourg's history, culture, economy, population, and more into an easily digestible infographic format.

These are usually warmly received by the general public, but one particular graphic has caused a bit of concern this year - the one highlighting the nationalities of Luxembourg's residents. As can be seen from the article image above, the largest groups of specific foreign nationality are individually represented by a stereotypical food from each country - so pizza for the Italians, a Pretzel for the Germans, etc.

Twitter user Diego Velazquez was quick to point out this questionable use of stereotypes, in a tweet that has spawned a lot of subsequent reactions:

This is how the Luxembourgish government represents its foreign population on fact sheets
Italians = Pizza
Spaniards = Paella
The rest = Sushi https://t.co/5HHea9eja0 pic.twitter.com/sPZaP24tan

None of the reactions sum it up quite as clearly as Paul Polfer's:

Mathias Flammang questions whether the joke will go down well - seems it hasn't so far:

Is probably supposed to be funny!
Stereotypes...
I wonder what the concerned population thinks about these “fact” sheets...

Finally, 'Knol Infos' went so far as to tag Xavier Bettel for a response:

THAT #Multimedia #Presentation is probably made by a novice, just out of #school, BUT NOT by #Professionals!!! A #shame of #publication!!! WHERE is #QUALITY???!!! FYI @krier_eric @Xavier_Bettel 👎👎👎