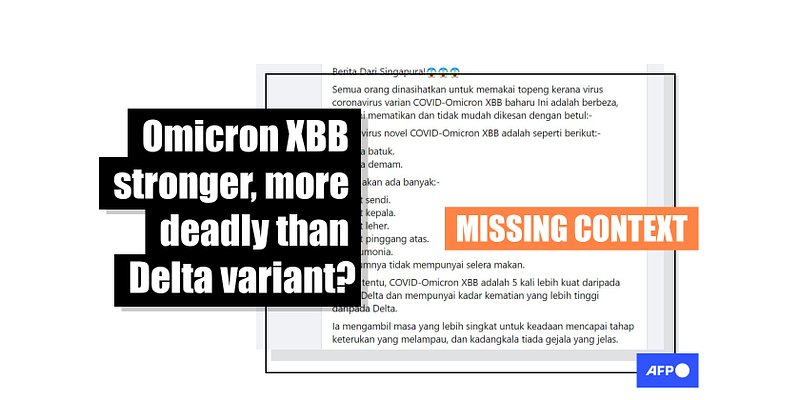 Misleading posts shared widely by Facebook users in multiple countries have warned that the Covid-19 subvariant Omicron XBB is "five times stronger" and "more deadly" than the Delta variant. The posts circulated shortly after Singapore reported the increase of Covid-19 cases in October 2022 mainly because of the Omicron XBB subvariant. Health experts told AFP there was no evidence that the subvariant is "five times stronger" than Delta, but said it remains a "variant of concern" according to the World Health Organization (WHO).

The misleading claim was shared by a Facebook user from Malaysia here on November 1, 2022.

The Malaysian-language post translates in part: "News From Singapore! / Everyone is advised to wear a mask because of the new coronavirus variant COVID-Omicron XBB.

"This is different, this virus is deadly and not easy to detect properly:-

"The symptoms of the novel virus COVID-Omicron XBB are as follows:- 1. No cough. 2. No fever

"It takes much less time for the condition to reach an extreme level of severity, and sometimes there are no obvious symptoms. / Let's be more careful!" 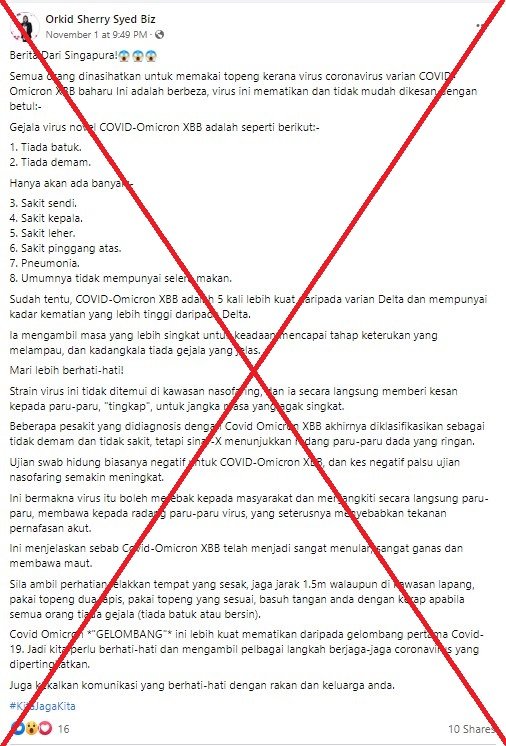 In October 2022, Singapore reported a rise in Covid-19 cases mainly due to the spread of the Omicron XBB subvariant.

"In Singapore, XBB is now the predominant subvariant circulating in the community, accounting for 54% of local cases during the week of 3 to 9 October, from 22% the previous week," the Singaporean Ministry of Health said in a statement on October 15, 2022.

Facebook users from different countries, such as Malaysia, Singapore, the Philippines, Myanmar, India and the United States, also share similar posts in English, claiming that the XBB variant is "5 times more toxic" and "has a higher mortality rate" than the Delta variant.

The claim also circulated in Indonesian and Chinese.

"According to current knowledge, we usually compare the growth advantage of emerging variant(s) with existing circulating strains, and several parameters are taken into account such as transmissibility, risk of reinfection, and immune evasiveness. It is hard to say that this one is stronger than the previous one because the term 'strong' or 'toxic' has non-specific meaning," he told AFP on November 4, 2022.

He also said that countries with a high proportion of XBB infections such as Singapore and India have not shown any significant differences in severity or mortality from previous Omicron strains.

Ian Jones, professor of virology at Britain’s Reading University, referred AFP to this statement by the World Health Organization (WHO) dated October 27, 2022 -- in particular the following part: "The two sublineages remain part of Omicron, which continues to be a variant of concern."

"Every new form of SARS-CoV-2 that circulates does so as it is slightly better at transmission but that does not equate to severity, and the most usual observation is that better transmission is associated with lower disease," he told AFP on November 4, 2022.

When asked about the severity of the symptoms as mentioned in the misleading post, Jones said: "The symptoms of infection remain similar to any other upper respiratory infection, and vaccination remains the most assured way of reducing any risk."

Both experts separately told AFP that it was still "too early" for any peer-reviewed studies to be published on the subject of the new subvariants.

However, Jones pointed to this preprint paper, which says XBB is potentially more immune evasive than BQ.1 and its parent BA.5.

According to an article published in The Conversation, XBB has been estimated to have a 30 percent lower risk of hospitalisation compared with BA.5, based on the figure provided by the Singapore Ministry of Health.

"But we don’t yet have data to support this from other countries, so this might change as XBB becomes more widespread," the article also said.

Thira pointed to this study which looks at variant-specific symptoms of Covid-19.

"Omicron is associated with lower reporting of loss or change of sense of smell and taste, and higher reporting of cold-like and influenza-like symptoms," it said.

In a statement on October 11, 2022, it said that "there is ... no evidence of XBB causing more severe illness. So far, the large majority of patients continue to report mild symptoms such as sore throat or slight fever, especially if they have been vaccinated."

"MOH also did not observe increases in COVID-19 deaths over the past month," it stated on October 14, 2022.

Malaysia's health ministry refuted the claims in the misleading posts on its official Twitter page on November 1, 2022.

Its Malaysian-language tweet translates as: "The Malaysian Ministry of Health (KKM) takes seriously the spread of false information that has gone viral on social media recently regarding 'COVID-19 OMICRON XBB' which can lead to confusion of facts without scientific proof created by irresponsible parties."