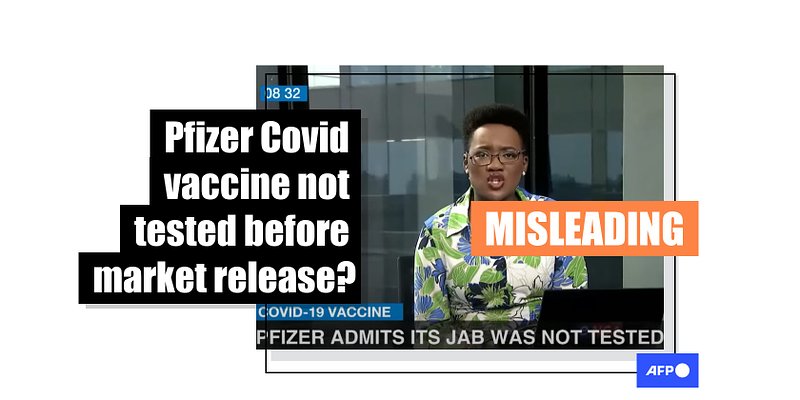 Leading South African broadcaster eNCA has claimed that pharmaceutical giant Pfizer admitted to not testing its Covid-19 vaccine before its release in December 2020. But AFP Fact Check found this to be a misinterpretation of remarks made by a Pfizer executive during a recent European Parliament hearing. Prior to the vaccine's launch, widely publicised clinical trials had proven its ability to prevent severe infection. However, what was not yet known was whether the jab also blocked transmission of the virus -- and Pfizer clearly stated so at the time of the studies being carried out. The point about transmission was raised at the EP hearing and later misconstrued on social media and by eNCA as evidence that Pfizer had lied about testing the vaccine at all. South Africa's lead pandemic expert, who was interviewed during the eCNA news segment, warned against misinterpreting the Pfizer testimonial.

In the bulletin, a presenter claims that “Pfizer has admitted it lied about its Covid-19 vaccine efficacy before it entered the market. She alleges that the company “told the European Parliament it was not tested before general public use. This is raising concerns as many took the vaccine hoping it will protect them”.

Professor Shabir Madhi, who headed South Africa's response during the Covid-19 outbreak, was interviewed for the news story and explicitly warned against taking the Pfizer official's EP remarks out of context.

“We need to be careful how we interpret what was being said," Madhi of Wits University said.

But the TV report nonetheless prompted hundreds of responses on YouTube from South Africans accusing Pfizer of lying to the public.

"If Pfizer was not tested yet administered, then they should be held accountable for the adverse effects it has had on people who took it without being informed that it was not tested," one user said.

Another commented: "There is video evidence (endless) of these people saying day in day out 'safe&Effective', they need to be held responsible, I’m taking names (sic)."

Meanwhile, the story sparked criticism from medical experts including Professor Mosa Moshabela, the acting deputy vice-chancellor of Research and Innovation at South Africa's University of KwaZulu-Natal.

"Why is this framed as though clinical efficacy trials were not done?" the public health specialist asked in a tweet.

On October 10, 2022, Pfizer executive Janine Small appeared in front of an EP Special Committee to discuss the pandemic.

During her testimonial (recorded here), she said that the company had not known whether its Covid-19 vaccine prevented transmission of the virus before it entered the market in December 2020.

Importantly, this is not the same as measuring the efficacy of a vaccine -- or, in other words, its ability to treat the symptoms of the disease and prevent severe infection. 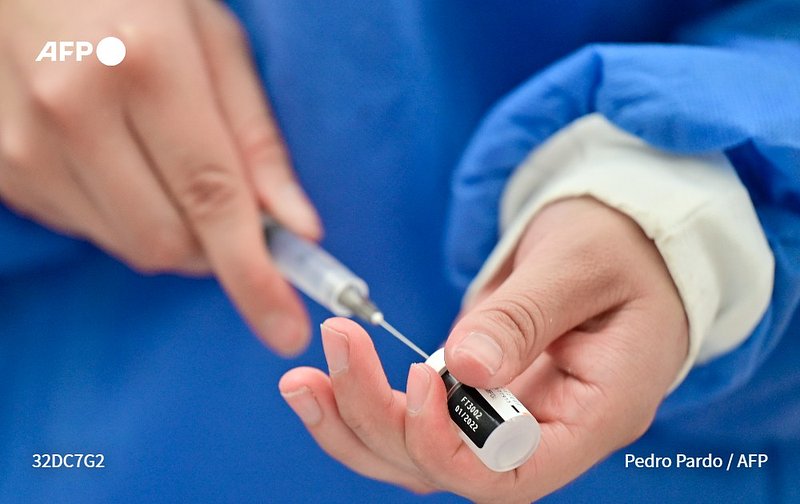 In the case of Pfizer, the company had indicated from the start that its clinical trials were focused on determining the jab's efficacy in preventing severe Covid-19 disease, not in blocking transmission.

Small’s testimony, however, was taken out of context, paving the way for misleading reports and false claims -- including from Rob Roos, a Dutch member of the European Parliament who had attended the hearing.

At the briefing, Roos had asked Small whether Pfizer had tested its Covid-19 vaccine for its ability to prevent transmission of the virus prior to its release for use.

“No,” answered Small. “We had to really move at the speed of science to really understand what is taking place in the market.” She proceeded to elaborate on the need for urgency.

Roos later tweeted: “BREAKING: In COVID hearing, #Pfizer director admits: #vaccine was never tested on preventing transmission. ‘Get vaccinated for others’ was always a lie. The only purpose of the #COVID passport: forcing people to get vaccinated. The world needs to know. Share this video!” 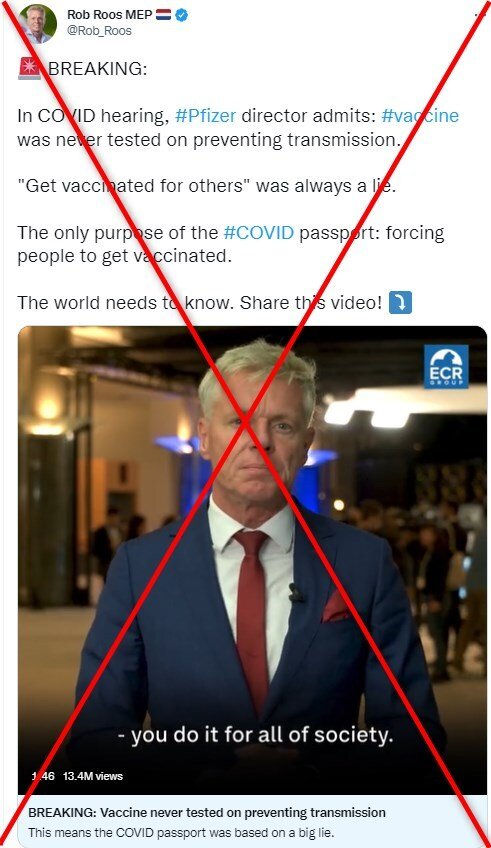 The tweet, which included a video showing the exchange between Roos and Small, had been shared nearly 180,000 times and viewed more than 13 million times as of November 14, 2022. Roos also shared the misleading claim on Facebook.

But Small's testimonial was neither an “admission” nor a revelation -- the information she shared has been public since 2020. AFP has debunked Roos's claim here.

Contacted by AFP Fact Check, eNCA said it was dealing with the matter. The video and unedited caption remained on its YouTube account as of November 16, 2022.

The Pfizer-BioNTech vaccine went through three phases of clinical trials, with the third phase designed to determine if it was safe and effective in preventing Covid-19 disease.

Results of Pfizer's large-scale clinical trial carried out on thousands of volunteers were published in the New England Journal of Medicine in December 2020. The trial found that the vaccine was very effective in reducing severe Covid-19.

Health experts also told AFP the goal of Pfizer’s vaccine clinical trials was to measure the jab’s effectiveness against severe forms of Covid-19.

They said transmission depended on many factors including Covid variants circulating at the time – which are not necessarily reproducible within a clinical trial.

“If in addition, this vaccine proved to be effective on transmission, it was even better, but that was not the goal of vaccine development at the level of clinical trials,” epidemiologist Yves Buisson said on October 13, 2022.

Results of phase III Pfizer-BioNTech vaccine clinical trials released by the US Food and Drug Administration (FDA) on December 10, 2020, indicated that among the “known benefits” of the jab is the “reduction in risk of Covid-19 confirmed at least 7 days after the second dose” as well as “after dose 1 and before dose 2”.

The trials found that the vaccine allows “the reduction of the risk of severe Covid-19 confirmed after dose 1”.

The effectiveness of the Pfizer jab against severe forms of Covid-19 already strongly suggested in the results of clinical trials was also verified during vaccination campaigns across the globe, as experts explained to AFP Fact Check in a previous debunk.

Additionally, the information that Pfizer’s Covid vaccines were not tested for stopping transmission was included in a report published by the US Food and Drug Administration (FDA) on December 10, 2020.

The subject of transmission is addressed on page 48 under the section titled “Vaccine effectiveness against the transmission of SARS-CoV-2”.

The FDA clearly states in the document that there was limited data at the time to assess the effect of the “vaccine against transmission of SARS-CoV-2 from individuals who are infected despite vaccination”.

“Additional evaluations including clinical trial data and post-authorisation data will be necessary to assess the effectiveness of the vaccine in preventing viral shedding and transmission of the virus, particularly in individuals with asymptomatic infection,” the document added. 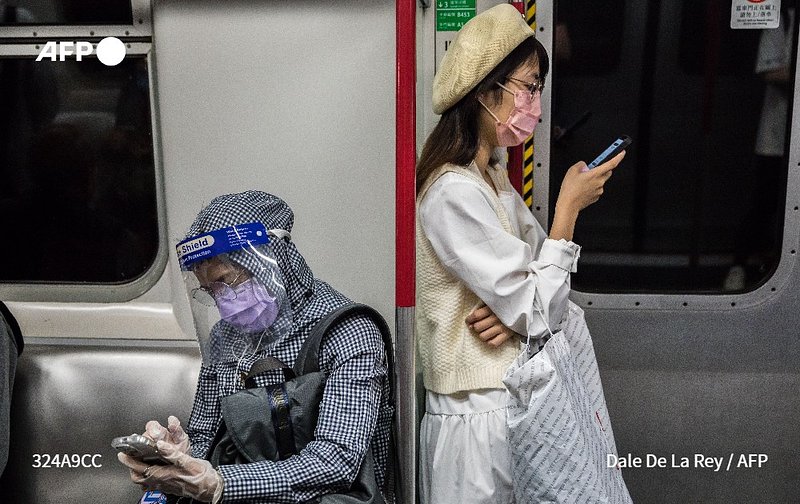 The report also noted that “the high efficacy demonstrated against symptomatic Covid-19 could well translate into an overall prevention of transmission in populations having reached a fairly high vaccination threshold”.

The information was widely reported by media organisations in December 2020, including AFP (here and here).

On December 11, 2020, the FDA said in a press release announcing the authorisation of Pfizer’s Covid-19 vaccine that “at this time, data are not available to make a determination about how long the vaccine will provide protection, nor is there evidence that the vaccine prevents transmission of SARS-CoV-2 from person to person”.

Contacted by AFP on October 14, 2022, Pfizer-BioNTech laboratory said that “the phase III clinical trial (the protocol for which was published in November 2020)” was not “designed to assess vaccine efficacy against SARS-CoV-2 transmission”.

The World Health Organization (WHO) has recorded a 90-percent drop in global Covid-19 deaths since February but still urged caution.

"We have come a long way, and this is definitely cause for optimism, but we continue to call on all governments, communities and individuals to remain vigilant," WHO Director-General Tedros Adhanom Ghebreyesus said in a press briefing on November 9, 2022. "Almost 10,000 deaths a week is 10,000 too many, for a disease that can be prevented and treated."