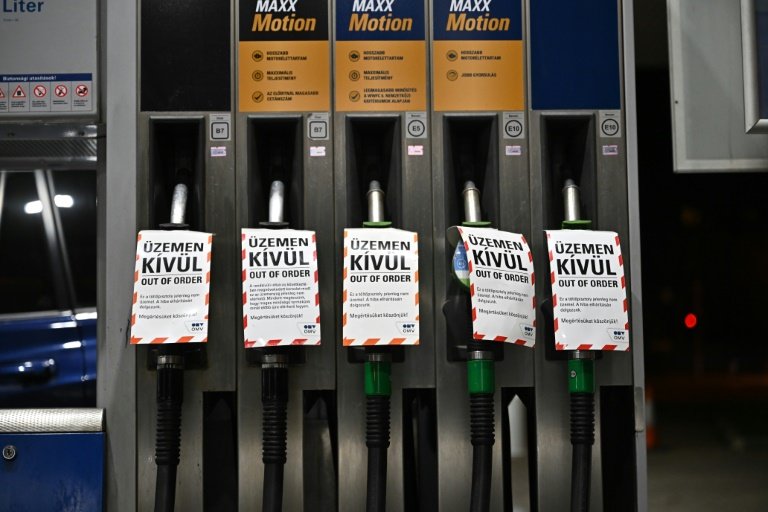 Hungarian media published images of hundred-metre-long queues at filling stations nationwide on Tuesday, while an AFP photographer saw most pumps out of order at several stations in Budapest.

"The government will abolish the petrol price cap at the suggestion of MOL" with immediate effect, Gulyas announced.

"What we feared came true: the oil sanction that entered into force on Monday caused perceptible disturbances in Hungary's fuel supply. MOL can't do without imported gasoline."

An EU embargo on seaborne deliveries of Russian crude oil came into force on Monday.

MOL's executive director Gyorgy Bacsa told AFP earlier on Thursday that the "supply situation is clearly critical, demand has skyrocketed, consumers are stocking up, and panic buying has begun."

"A partial product shortage is present in our entire network and a quarter of our filling stations were completely empty," said Bacsa.

The fuel shortage has been caused by a 30 percent drop in imported fuel, as well as maintenance at one of MOL's refineries, and will take "several weeks" to resolve, he said.

The government-mandated price cap on vehicle fuel products has led foreign firms to cut fuel shipments to Hungary, according to the Association of Independent Petrol Stations.

Reviewed every three months, the cap was last extended in September and was valid until the end of the year.

The government said price caps -- on a range of basic foodstuffs as well as fuel -- were aimed at supporting the economy and curbing rampant inflation.

Annual inflation in Hungary reached 21.6 percent in October, its highest level since 1996, and the third highest in the EU, according to Eurostat.

Matolcsy, usually seen as an ally of nationalist premier Orban, had also called for the caps to be withdrawn.

Adding to Orban's economic woes, recession is looming with GDP contracting by 0.4 percent in the third quarter, while the local currency, the forint, has plunged to record lows against the euro this year.

"Hungary is in a near-crisis situation," said Matolcsy.