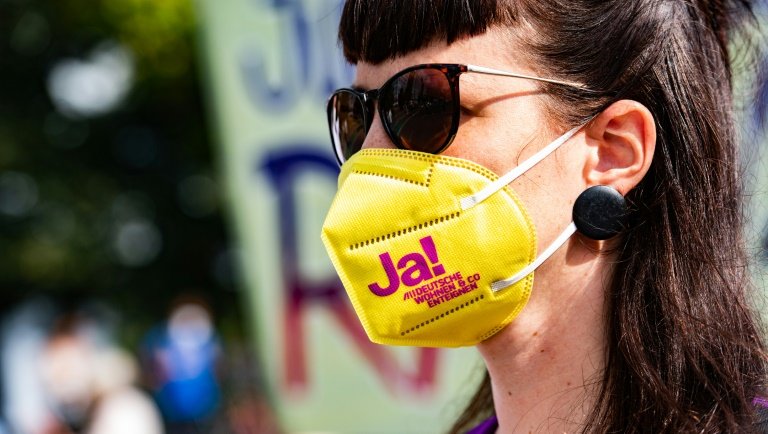 In her apartment in suburban Berlin, Regina Lehmann despairs at the letter from her landlord, a big real estate group: the rent is going up.

Effective November 1, the increase of 12.34 euros ($14.54) on her monthly rent of 623.44 euros will be "difficult" to finance with her only income a disability pension, Lehmann tells AFP.

Almost 700 of her neighbours in the popular Berlin neighbourhood of Spandau will suffer the same fate, boosting their rent by up to eight percent.

Increases like these are at the root of a popular initiative to "expropriate" real estate companies such as Adler, which owns Lehmann's flat, that will culminate in a local referendum on September 26, the same day as national and municipal elections.

Residents in the capital have become increasingly frustrated with rising housing costs, as the city's attractiveness to outsiders has grown in recent years.

And beyond Berlin, the cost of housing has become a hot topic on the campaign trail in the contest to succeed Angela Merkel as chancellor.

Back in Lehmann's living room, surrounded by pictures of her family, Lehmann says she simply "won't pay" the rise.

"I think, if we pay, after a while they'll just increase the rent again," she says.

Rent campaigners secured the referendum in Berlin after collecting 346,000 signatures in support of their proposition -- well above the number needed.

They are pushing to "expropriate" homes from real estate companies with more than 3,000 properties.

The result of the poll will not be binding, but advocates hope to force city government to respond to soaring rents, with the cost of housing going up by 85 percent between 2007 and 2019.

Campaigners lay the blame at the door of major real estate groups, such as Adler, which owns 20,000 properties in Berlin.

In Lehmann's Spandau district, activists argue Adler's attempt to hike rents is illegal, exceeding a legal reference index linked to the average rent in each area.

The property group, in response, describes an "improved environment" around the lodgings that gives it grounds to charge more.

Supporters of expropriation have upped the tempo of their campaign in recent weeks to win over undecided voters, hanging posters and organising demonstrations across the city.

Many Berliners experienced rent increases after the German constitutional court struck down a rent cap which had been introduced by the city earlier this year, and a poll by the Tagesspiegel daily showed 47 percent of residents supported the radical proposal put forward in the referendum.

"We have to fight for our rights," says Catia Santos, 41, who recently attended a rent protest with her partner.

"Recently my rent has gone up by 100 euros, even though I am not earning any more than before."

On Friday, just over a week before the vote, the city of Berlin announced the purchase of 14,750 residential properties for 2.4 billion euros from German real estate giants Deutsche Wohnen and Vonovia, a deal forged under pressure to find an answer to rising rents.

Forcibly taking ownership of privately owned accommodation has largely been rejected by national and local politicians in favour of plans to speed up the building of new homes.

"The best protection for renters is and always will be having enough places to live in," Armin Laschet, the conservative candidate to succeed Merkel as chancellor, told a real estate conference in Berlin in June.

The social-democrat favourite in the local Berlin elections, Franziska Giffey, also declared her opposition to the proposal, saying it could "damage" the city's reputation.

But her party's candidate to be chancellor, Olaf Scholz, has called for a "rent moratorium" to stabilise prices.

Only the far-left Die Linke and some individual Green candidates have come out in favour of expropriation, with some even displaying the rent campaigners' logo on their election materials.