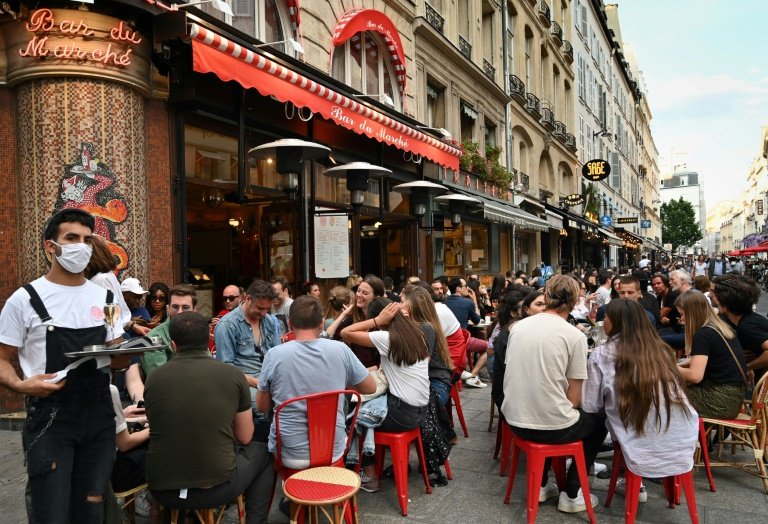 Restaurants, cafes and bars in Paris were permitted to reopen with restrictions / © AFP

World stock markets rose Tuesday as coronavirus lockdowns were relaxed, with investors shrugging off mass protests in the US and a downcast outlook from the head of the World Bank.

In Europe, Frankfurt was the star performer as German investors played catch-up after a long holiday weekend and eyed hopes for a new COVID-19 domestic stimulus package.

Wall Street stocks continued to advance, ending solidly higher as investors focused on the boost from stimulus measures and economic reopening rather than the mass protests sweeping through US cities.

"The market is very focused on what the future holds and at the same time the liquidity that is available to the market is very high because there is no shortage of stimulus," said Nate Thooft, senior managing director at Manulife Investment Management.

Oil marched higher on hopes of recovering demand and amid speculation that key producers including Saudi Arabia and Russia will extend massive output cuts that have helped support the virus-plagued market.

But World Bank President David Malpass warned that estimates of $5 trillion in economic value destroyed by the COVID-19 lockdown measures likely falls far short of the actual damage that will be done.

"The countries are facing the deepest global recession since World War II," Malpass told AFP. "And that should keep lots of people up at night worrying about the consequences for the poor, for the vulnerable within those economies, for children, for healthcare workers, all facing unprecedented challenges."

Among individual companies, Lufthansa shares soared after the airline's supervisory board approved a nine billion euro ($10-billion) bailout from the German government.

Dick's Sporting Goods won 3.7 percent despite reporting a $143.4 million first-quarter loss as the retailer more than doubled its e-commerce sales.