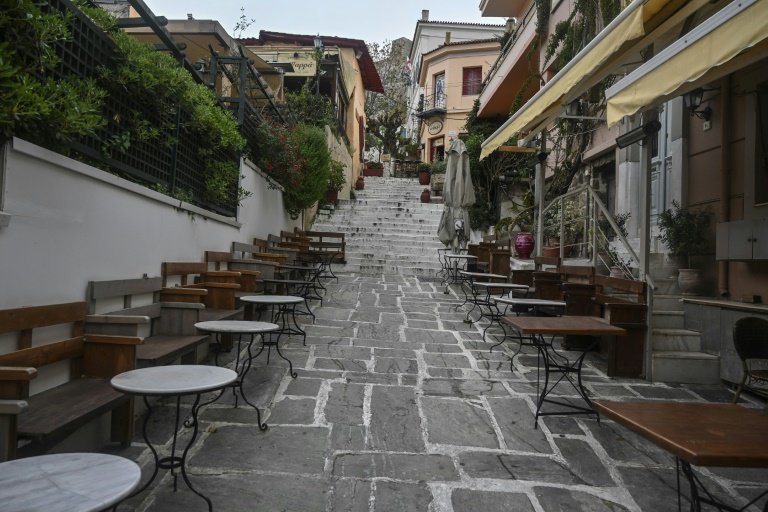 The tourist industry in Athens, as in many other European capitals, has ground to a halt, with planes grounded and restaurants, museums and archaeological monuments all closed / © AFP

At the foot of the Acropolis hill, in the touristic Koukaki district, the coronavirus lockdown has silenced the sound of Airbnb customers' wheeled luggage.

The tourist industry in Athens, as in many other European capitals, has ground to a halt, with planes grounded and restaurants, museums and archaeological monuments all closed.

This has left a huge hole in the Greek economy which had been recovering from a decade of crisis.

Owners of small apartments in Koukaki, who had been renting them on the Airbnb platform in order to provide income during the financial crisis, are once again struggling. 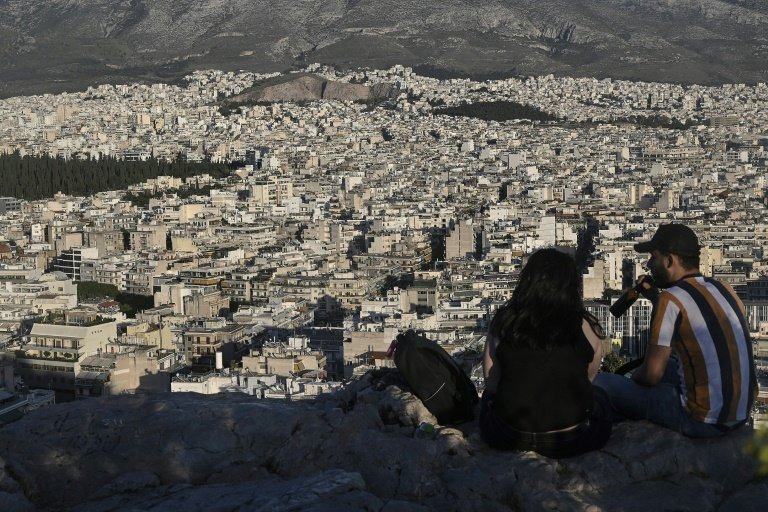 Owners of small apartments in the tourist Koukaki district of Athens, who had been renting them on Airbnb to provide income during the financial crisis, are once again struggling / © AFP

"I hope I won't have to put them for long–term rental, but I may have to if this situation drags on," she adds. For the time being her two Airbnb apartments accommodate medical staff.

Stefania Dimitroula has already put her apartment up for long-term rental.

"Since the beginning of the summer of 2018, it was fully booked via Airbnb, almost exclusively by foreign tourists," the 32-year-old woman said, but "100 percent of the reservations for April, May and June have been cancelled".

Being unemployed, she had no other choice. 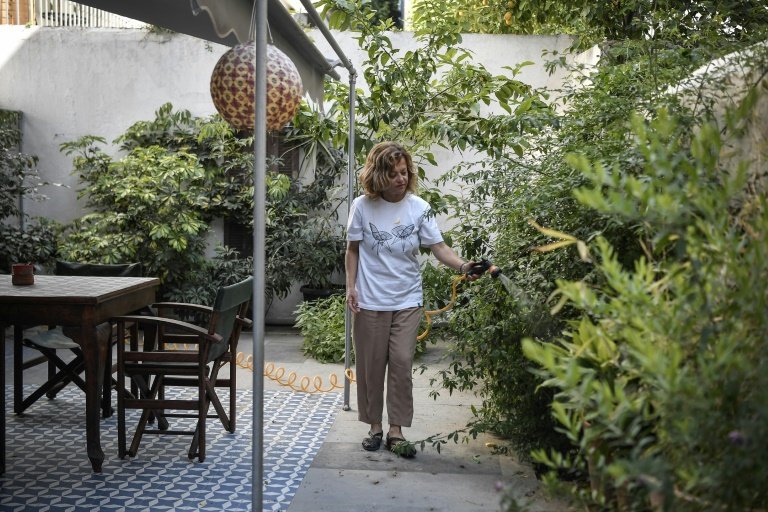 "I was counting on the earnings of this apartment, around 1,000 euros per month, to compensate for the loss of my job," she explained, expressing pessimism about the summer season, which the Greek government is hoping to jumpstart on July 1.

Long-term rentals are becoming "a major trend", according to Patrick Tkatschenko, a real estate agent in Athens.

"Airbnb is suffering a huge blow," he told AFP.

- Airbnb slashes staff but will adapt-

The "hard hit" American home-sharing platform announced on Tuesday that it will slash a quarter of its work force -— some 1,900 people all around the world.

"We are collectively living through the most harrowing crisis of our lifetime," Airbnb co-founder and chief executive Brian Chesky said in a blog post. 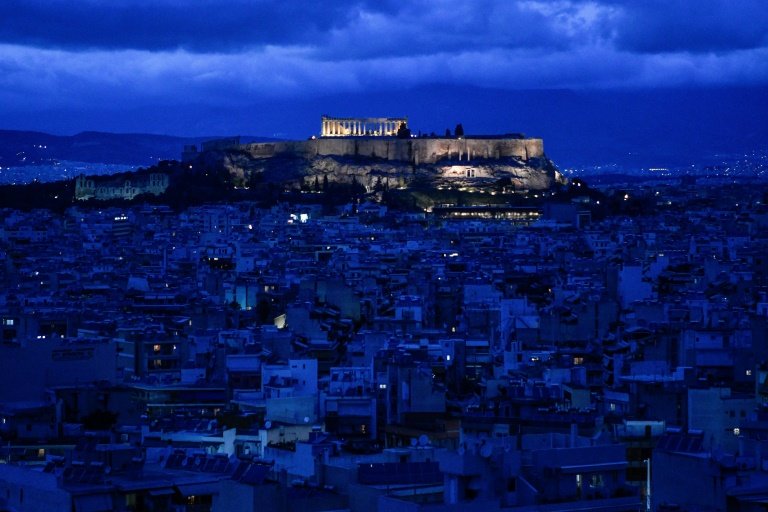 This year the San Francisco-based company's revenue will be "less than the half" of the 2019 figure, and Chesky admits he doesn't know when the tourists will return.

Still there are many who believe that holiday apartments, rather than hotels, have a future, as safe havens away from the crowds.

Enrique Alcantara, president of Apartur, the holiday apartment owners' federation in Barcelona, foresees a 85 percent drop in sales revenue for 2020.

He predicts though that holiday apartments "are going to adapt more easily to the new times that lie ahead, to the new needs of the tourists, mainly as far as security is concerned".

In Athens too, despite the staggering drop in holiday reservations, there remains a glimmer of hope.

"Tourists will benefit from private apartments in order to feel more secure in comparison with hotels where they will have to interact with more people," Stratos Paradias, president of the Greek Federation of Property Owners and of the International Union of Property Owners, told AFP.

He also thinks apartments that manage to stay in the short-term rental market will bounce back "faster than elsewhere" because "Greece is considered one of the safe countries thanks to the way it has handled the COVID-19 pandemic".

"For July-August, all reservations were cancelled," the 43-year-old French woman explains. 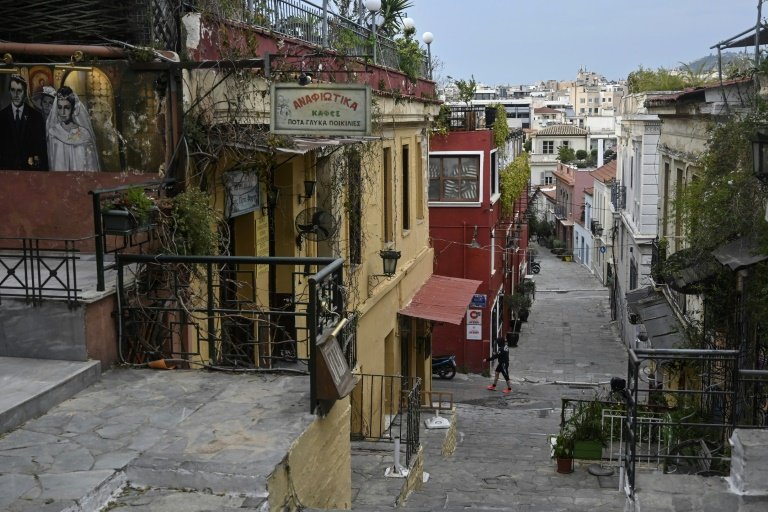 Nevertheless she isn't considering taking her apartment off the Airbnb platform because it accounts for 80 percent of all her reservations.

Juan Quilis, a 35-year-old telecom technician who owns an apartment in Seville, is also sticking with short-term rentals for the time being.

"I'm not too worried for now, because I have a savings cushion but if I see that things don't come around, I will put my apartment in long term rental. As a last resort."

In France, Airbnb expects to see its reservations come back swiftly thanks to its local clientele, with the French particularly fond of staycations.

Meanwhile in Amsterdam, holiday rentals spiked in mid- April and have plummeted since, according to the local newspaper Het Parool.

A study conducted by Spitogatos, the most popular online property ads network in Greece, found a clear rise in apartments listed for long-term rentals in mid-April, accounting for 30 percent of the market in central Athens. 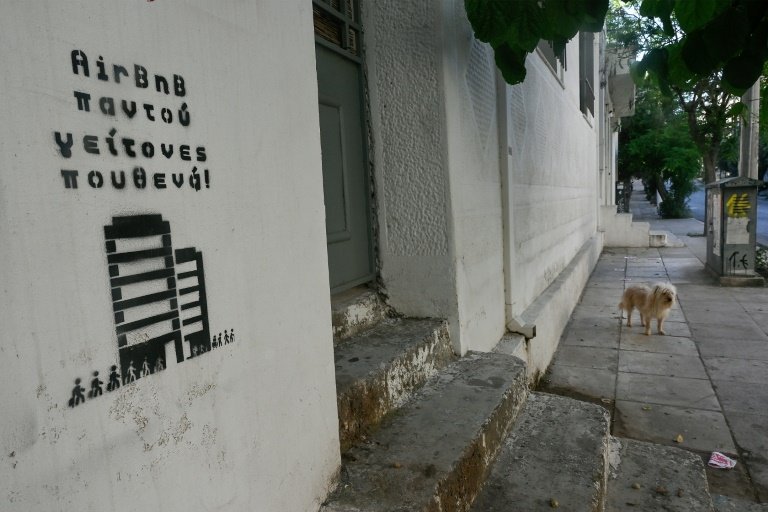 An anti-airbnb sign reads: 'Airbnb everywhere -- Neighbours nowhere' in the Koukaki district in Athens. The short-term rentals practice had got out of control in recent years, says Stratos Paradias of the Greek Federation of Property Owners / © AFP

Spitogatos CEO Dimitris Melachroinos thinks the long-term rental sector will keep rising as it will be seen as "a safer option".

This new turn in the real estate market will also lead to much-needed regulation of the sector.

"The short-term rentals practice grew out of control in Athens in recent years. The purge provoked by the COVID-19 crisis is necessary," Paradias says.

In Koukaki, the number of short-time rentals skyrocketed between 2017-2019, from 360 to 1,150, according to AIRDNA, which analyses rental platforms like Airbnb. As a result, property prices have nearly doubled causing problems for local apartment seekers.