Since recently, a new service has been offered at Findel Airport. A service which made us curious, so we went to test it for you.

In April, Luxairport sent out an enigmatic tweet which announced the landing of a UFO at Findel. Two months later, we went to see what it was all about.

For sure, we were intrigued by the concept of a start-up company offering the rental of Tesla Model S cars at Luxembourg's airport.

We decided to try the customer experience, which involved first making an online reservation then downloading an app in order to manage it in real time.

Our first impression was that it's extremely intuitive. The reservation took only two minutes, and the follow-up  (through the app) didn't take much longer.

No need to visit a counter, to sign a multitude of papers and (thinking of you, the reader) no extra costs on arrival.

Keep in mind though, that you'll need to provide the company with a copy of your identify card or passport and of your driver's license to confirm your reservation.

However, to do it couldn't be simpler. Launch the application and take a photo of each document. The app will take care of framing your shots by itself.

There's nothing like getting out of the aircraft then just getting in your car to go home or to go to a hotel. No complications.

And that's exactly what UFODrive offers. But does the start-up keep its promises? For us, it was a big YES.

At the airport, everything was clearly indicated. You can very easily find UFODrive's Teslas, which are in the airport's underground parking garage on level "-2". Once you're standing in front of the car, you just need to take out your smartphone, open your app, then check which number plate has been assigned to you.

You found it? The next step involves checking whether there's any damage to the vehicle,  then accepting the contract on your smartphone. Then the car will then open as if by magic.

Either you love Tesla or you don't. We found ourselves blown away. As soon as we opened the door, everything on board lit up and some background music started playing, inviting us to sit inside the car.

UFODrive leaves a booklet for its customers to help them find their way in the high-tech car imagined into being by Elon Musk.

Our recommendation: ignore the superb dashboard for a moment and read the three pages which will give you all the information you need to understand how the Tesla that will be yours for a few hours works.

You'll learn that your key can be found in the glove compartment, and that it must be clicked upon twice in order to start the car. All you'll need to do then is to put it into forward motion and you're away. 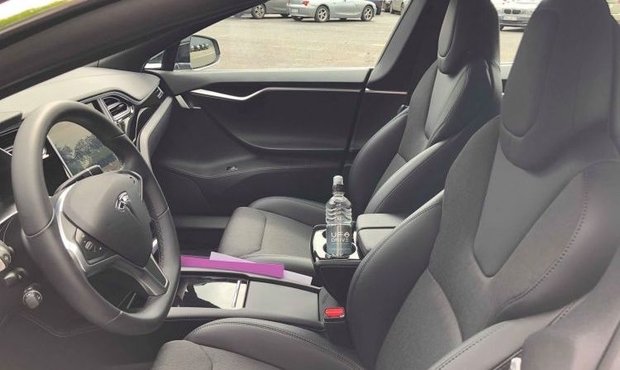 The car is comfortable, classy and doesn't make a single noise. However, that's no reason to under-estimate the Model S, which is very responsive and can produce 259BHP.

We opted to take the A1 motorway and drive towards the German border, in order to see what the car could do on a fast main road. On the motorway, it was as if we were driving a limousine. The comfort is absolute and we were able to enjoy all of the car's functionalities.

One appreciated example: it detects other close-by vehicles and shows them on the dashboard screen. Everything is done so that the driver is at ease and feels safe.

Going back, in order to leave nothing to chance, we decided to take the national roads. Verdict: the car is equally well-adapted to those roads as to motorways.

There's not much more to say apart from the fact that we were not particularly anxious to return the car when we got to the airport.

At this step, it's very simple again: a parking ticket is to be found tn the car's console, allowing you to reach the "-2" level of the underground parking facility. 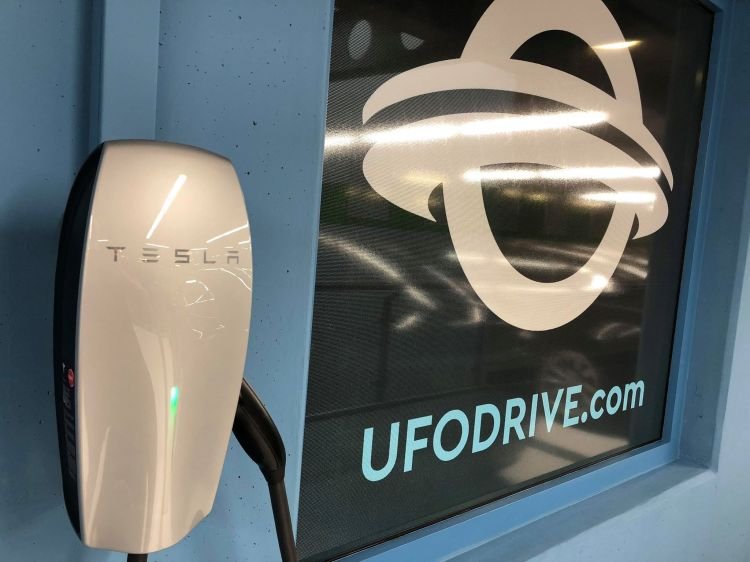 Once you get to your parking space, you have to ensure that you have taken along all of your personal effects and that you left your the key in the glove compartment. Then you open the UFODrive app to "end" your reservation.

That done, the car reacts instantaneously and closes. Plug it in and then go to the terminal. It's time now, sadly, to leave it behind and head off.