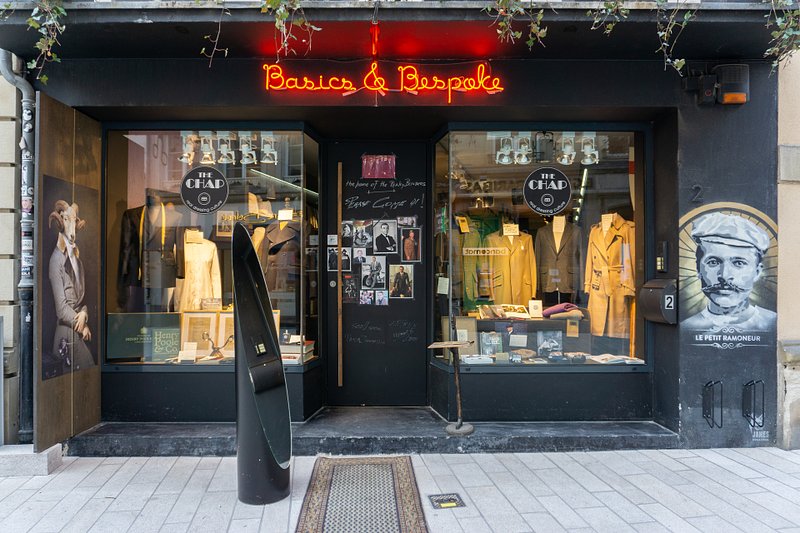 Over the last decade, Pascal Zimmer has built up a number of businesses from scratch, one of which is the tailor shop Basics&Bespoke.

What started as a side-gig to his architecture firm has become a synonym for fashionable menswear. From made-to-measure tailoring and refurbished vintage suits up to classic accessories and perfumes, ‘Basics&Bespoke’ has become the go-to spot located in the heart of Luxembourg-City.

We sat down with the ex-judo professional turned shopowner to discuss all things tailoring, his love for London and the appeal of vintage tailoring. 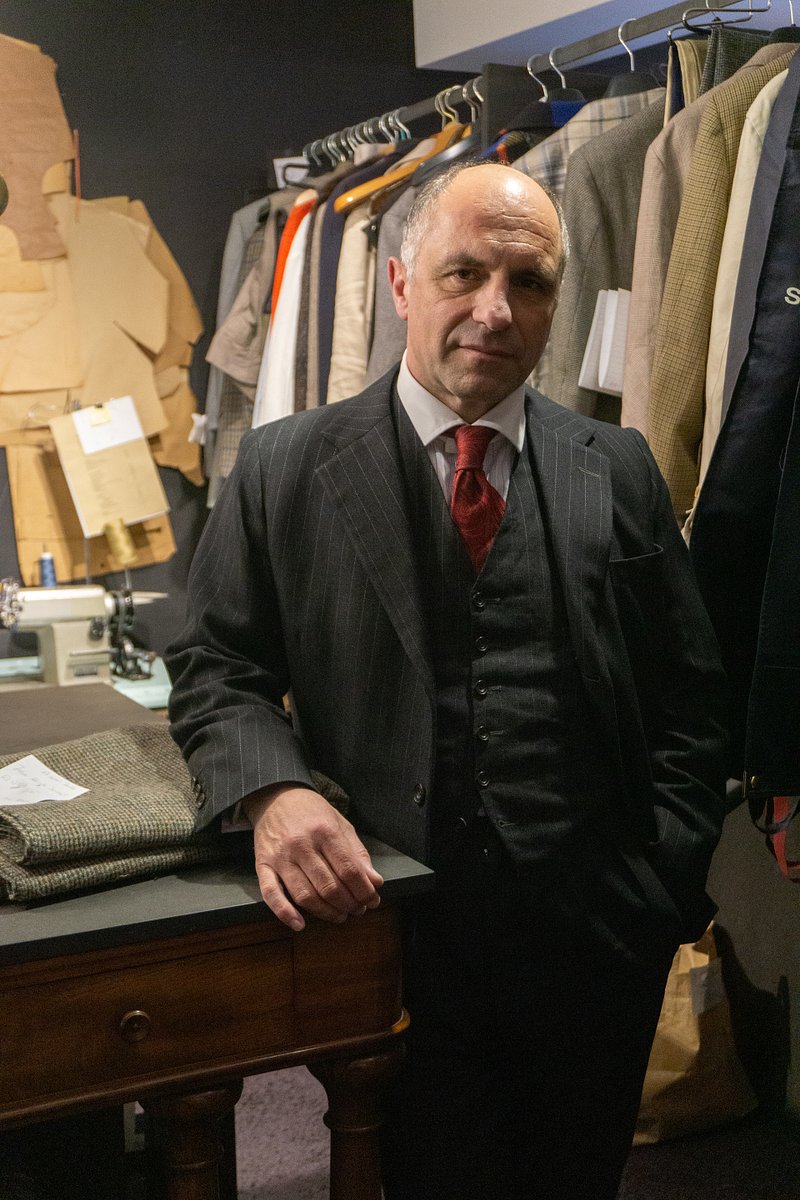 Do you remember how you got into suits?

I was about 18 or 19 years and visited Savile Row in London for the first time. I come from a working-class family, so I didn’t have the money to buy anything there, but nonetheless, I stood in front of Henry Poole and Anderson&Shephard and the likes for at least 4 hours.

I can’t say that I understood much of what was happening in the shops but it was just fascinating to watch people create those beautiful suits.

At one point this really elegant man came out and asked me, ‘Sir, can I help you?’. I was a bit shocked as I don’t think anyone had ever called me ‘Sir’ before this moment (laughs).

He asked me if I wanted to come inside and have a look around and he ended up showing me around the Henry Poole store for about half an hour.

Fast-forward to when I came back to Luxembourg, I found a vintage Henry Poole tweed suit from the 30s and instantly fell in love.

I think that was the first contact I had with vintage suits and I still have that particular one today. 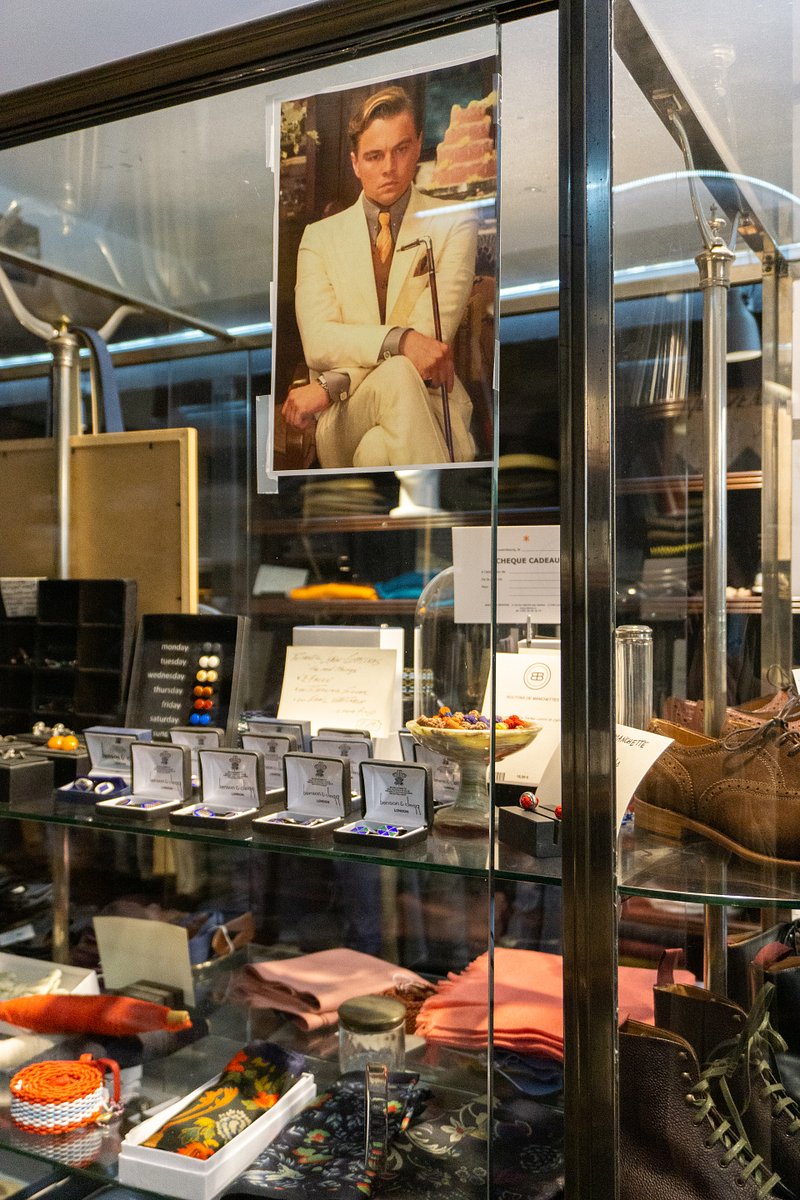 If you had to choose a golden era of suits, which one would you go for?

I think that every phase has its perks, but if I had to choose one, I’d definitely go for the 20s, 30s and 40s, so the phase between the wars.

In your opinion, what makes London tailoring so special?

I think of London as the cradle of fashion. It was the last big empire to exist and the style of their royal house has been impacting the way we’re dressing ever since Queen Victoria’s reign.

I’m not that huge on contemporary British designers, but if you look at designers such as Vivienne Westwood, you can’t deny that they’ve got amazing references and their designs aren’t as superficial as most things that are created nowadays, which is probably due to the long-standing history of the city.

It’s a bit like architecture: to build interesting houses for the modern age, you’ve got to know where you come from and that, London designers know.

Savile Row tailoring has a special aura to it and even though I really like Italian tailoring and even American tailoring for summer, London just hits differently. 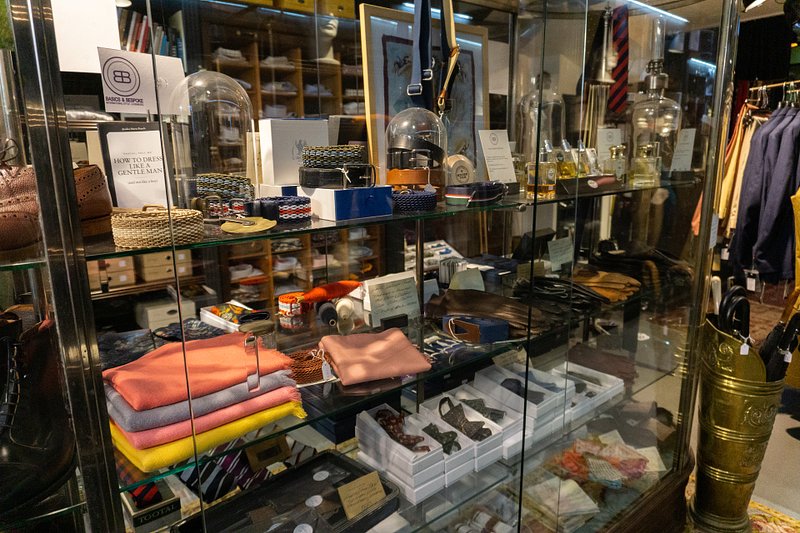 You’re an ex-judo professional and work in construction and architecture as well. How did you come up with the idea to open up ‘Basics&Bespoke’ on top of it all?

I was always interested in clothes, especially classic fashion, and would go to the tailors when travelling to London or Milan. Over the years, I decided that it would be nice to make a little side-gig out of this passion - this way, I also have an excuse for my wife to further talk and buy clothes (laughs).

At first, it was a very modest shop where I’d work on Fridays and Saturdays. Selfishly speaking, I wanted to create a shop for myself where I’d sell exactly what I’d like to buy.

As such, the pillars formed themselves basically and it became all about tailoring and vintage, which, in the beginning, was more of a source of research and inspiration, but then became a core factor of the shop.

Why did you decide to incorporate vintage items as well?

I think it would be wrong to claim that it’s because of the environment. Sure, that’s a nice by-effect but my thought process wasn’t as noble as that.

I like the vintage look, the cultural aspects of it and the idea that those items were made at a time where the seamstresses didn’t have to work against time but could strive for the perfect finish.

That’s probably one of the reasons why vintage items that you can still find nowadays, meaning 60, 70, 80 years after they were sewn, are the best of the best.

Plus, back in the days, people put a lot of thought into proportions and high-quality materials, both of which are aspects that oftentimes fall short nowadays. 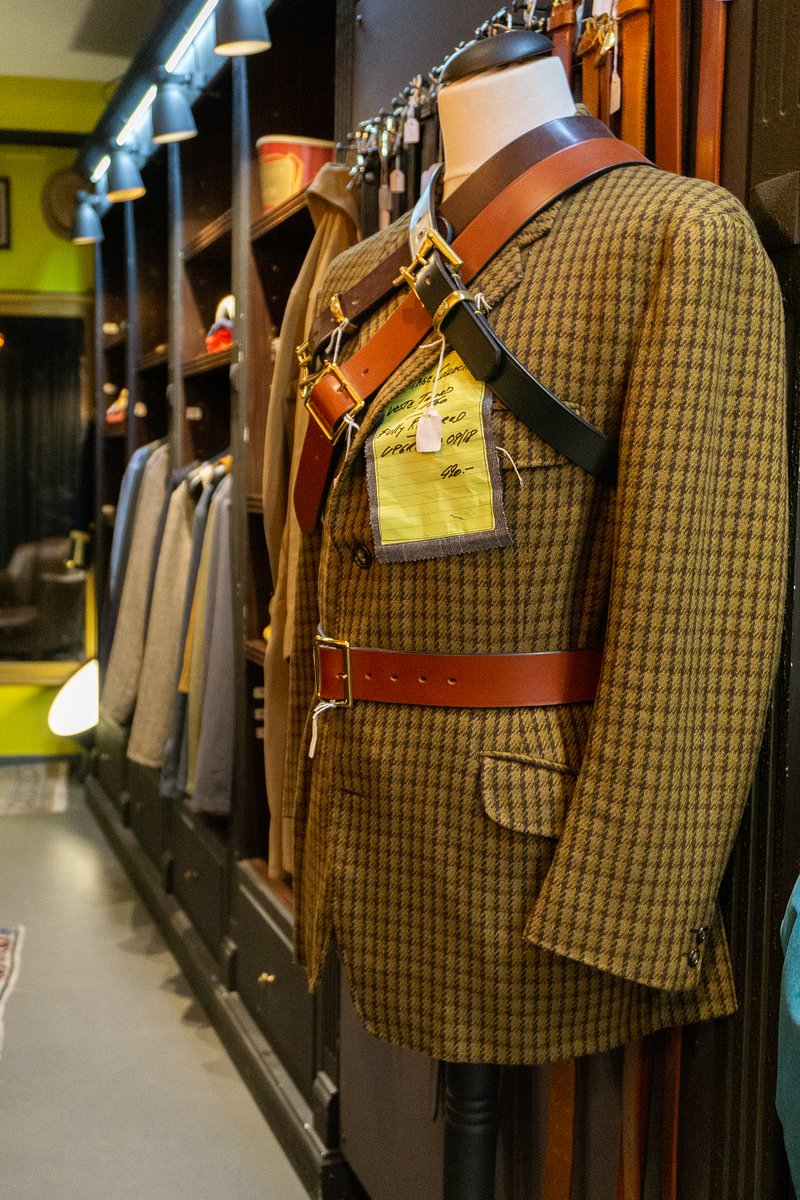 There’s not really a pattern here, but I have to say and I know this might surprise some people, we have a lot of younger clients who are interested in vintage items.

That’s partly due to TV series like ‘Peaky Blinders’ and ‘Madman’. When those two aired, we had a lot of young men coming in and asking for pieces that were exactly like the ones in the series, so you’d have a guy with full-body tattoos who was looking for an old-school suit which is a contrast I love.

What are the parallels between sports, architecture and fashion?

While it might not seem like that, they are indeed all very similar. I like to think of it in layers, meaning sports as the first layer, because it’s literally your body.

Then, there’s the second layer: the suit which you wear on your body. And lastly, the house which you live in is the third layer.

The two latter are all about the making process, concept, material, proportions and portrayal of how you want to be perceived by your surroundings.

Do you want to be the traditional Londoner businessman today? Or would you rather be the nice East coaster?

It’s the same in construction. Architecture, though not as interchangeable as the suit, is also an answer to what you want to communicate to others.

But the most important parallel between them is that they’re made by humans for humans. And because of that, I think that there’s nothing wrong with the final products not being ideal.

I like seeing that my jacket was made by a person who was trying their hardest to make this jacket the best it could be and not by a machine that makes it perfect. 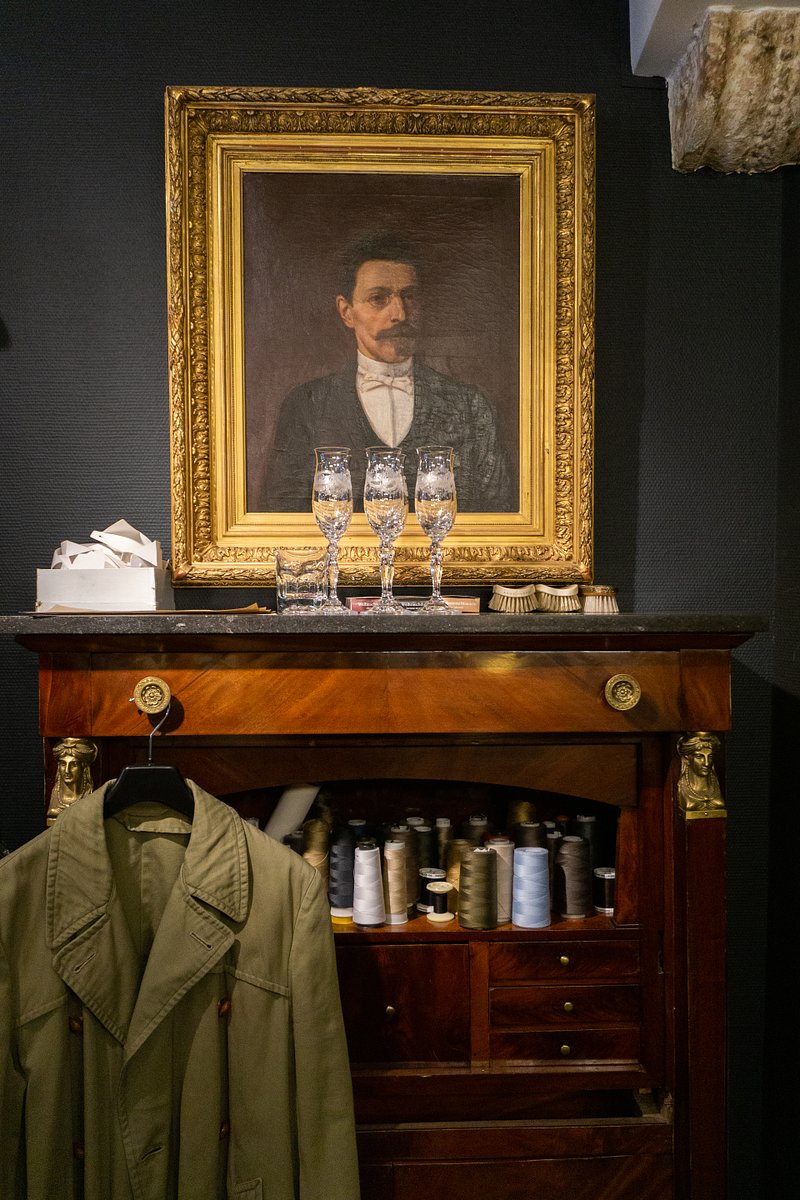 You’ve got three shops in the meantime. How did that come about?

That was never really the plan (laughs). I opened my first store purely out of passion and I think that’s also the main reason for its success.

The second one, ‘The Chapette’, opened shortly before the pandemic hit and it was more on request than anything else.

There were a lot of women who came in with our male clients and really liked the concept so they always asked why we didn’t open a store for them and sell those ‘iconic basics’ as you call them, like a coat which will be your best friend for the next 20-25 years and so on, and that’s exactly what that one’s about.

The third one was pure coincidence. We always had the shoes here in the cave of this shop and got the opportunity to open up a shoe store so we leapt, but I’m not saying that it’ll always stay this way.

We’ll have to wait and see over time how it goes - right now, it’s a bit difficult to make plans.

Talking of which, how did you experience this last year?

It was an interesting year. We realised how important it is to have a big and loyal client base, which we’re fortunate enough to have, so ‘Basics&Bespoke’ worked more or less fine even during the pandemic.

Of course, we took a bit of a hit, especially because there were no weddings and other events that require every man to wear a suit, no matter if they’d usually wear one or not.

For the women’s shop, it was a different story, because there wasn’t much time to build a client base before the pandemic hit.

But this whole phase had its pros, too. I feel like people have started looking and shopping more locally.

Over the last years, that has been constantly decreasing in popularity, but I feel like this whole crisis could really be a way to relaunch retail.

Plus, it has helped raise even more awareness for sustainable shopping which, if you’re buying a refurbished jacket from the 60s, is provided for sure.

And more generally, how has the Luxembourgish retail market evolved since you’ve opened your first shop?

It has evolved a lot. When I was young, Luxembourg was a horrible place to be. It was old, ugly, conservative and nothing interesting was ever happening here.

In the meantime, I think of Luxembourg as the best place to live which is partly due to our huge migration quota. That’s why we can eat good food from all over the world, wear English suits and Italian shoes.

This multi-cultural society mixed with the Luxembourgish calm lifestyle is what makes this place so special. At the same time, it’s also what pushes the demand for new and different retail offers, making it all the more interesting.

I’m currently writing a book called ‘The Real Things’, as you do when you’re moving towards the end of your career (laughs). The book describes a way of life and, in a way, explores the parallels between those different industries I’ve worked in.

Then, we’re also working on creating our in-house label. An example, Edward VIII was well-known for wearing his suits more casually and pair them with suede shoes.

Those suede shoes seem to be impossible to find nowadays - not sure why - so now, we’ll be making very similar ones in Northampton as a sort of re-edition of this iconic shoe.

And lastly, we’ve hired a new tailor who’s specialised in the so-called ‘soft tailoring’ which is more of a slack-fitting suit in old-school materials but that’s adapted for modern-day needs.

But if you’d ask me tomorrow, I’d probably add something to this list (laughs).