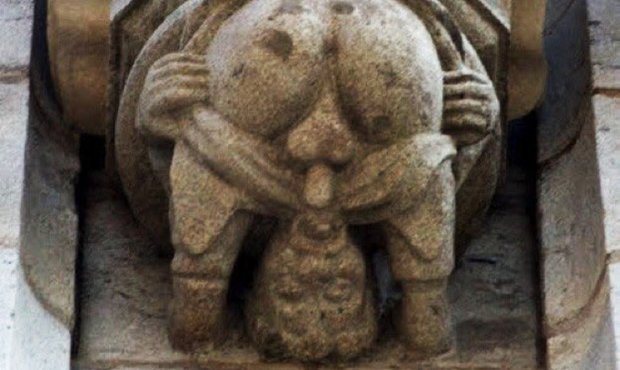 Medieval art can often be rather bizarre, but some statues really take the cake.

One more extreme example has made the rounds on Twitter. It appears that one person all of a sudden noticed the rather suspect nature of a statue on the Cologne City Hall building.

We often walk past the facades of buildings without examining them in a lot of detail. This rather small carving is slightly hidden and placed under the statue of Archbishop Konrad von Hochstaden.

On the walls of Cologne City Hall, hidden under a larger statue of Archbishop Konrad von Hochstaden, is a carving showing a man giving oral sex to himself. It dates to around 1410 and no one really knows why it’s there. pic.twitter.com/fiCi5UkX6j

The carving is especially noticeable for the position of the figure. To put it bluntly, the carving depicts a man with his head between his own legs (with his trousers down) in the process of autofellating, aka given himself oral sex.

Why is the figure on the walls of the City Hall building? It's not quite clear. The Cologne statue went viral after the Twitter account @WhoresofYore, an account dedicated to tracing sexual history in art, posted a picture of the carving. The Tweet has nearly 40,000 likes.

Historians of Cologne may be familiar with the figure, but are also at a loss to why this position in particular was depicted. All that we do know for sure is that it is a replica of a different carving from the year 1410. The original carving is based in the tower for conservation purposes.

It's a common thing in medieval sculptures. It's a joke from the sculpturers.
They are mounted on a high position, so you don't notice them easily. pic.twitter.com/r5bVJz4qax

The head of the City Hall's conservation, Ulrich Krings, explained that such figures are not a rarity. Lewd statues like the rather cheeky carving were meant as a form of protest against the authorities' attitudes to morality.