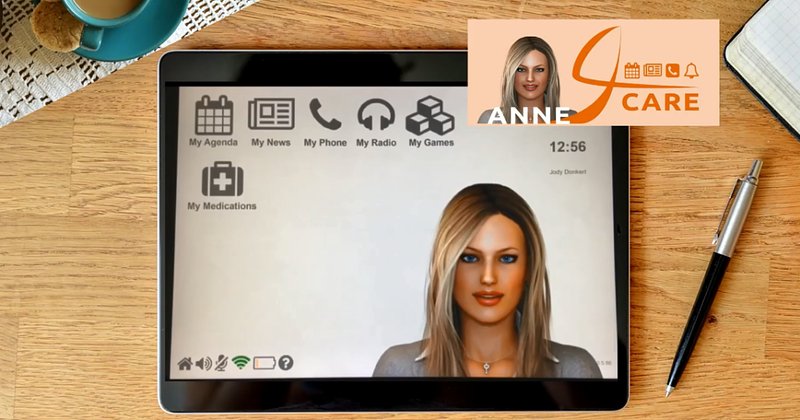 The number of people affected by dementia is increasing steadily. Worldwide, approximately 47 million people have dementia, and statistics suggest this number will increase threefold by 2050. Not only that, but the global cost associated with the disease is estimated to exceed one trillion US Dollars by 2030. In Luxembourg, between 10000 and 11000 people suffer from dementia. Enter the largest network of home care in Luxembourg ‘Stëftung Hëllef Doheem (SHD)’, which is involved in an international project that strives to help people with dementia live independently for longer using an innovative technology approach.

SHD is part of an international research project ‘Living Well with Anne’, a virtual personal assistant whose goal is to tackle the issue of dementia care by helping people affected by it. The system (‘Anne’), was designed to support older adults in their day-to-day lives with a communication, reminder and gaming function. It is based on a modular software solution that combines, for example, language recognition and generation, 3D rendering and an adaptive decision control mechanism.

The international cooperation working on the project mostly includes partners in Switzerland, but also in Holland and Italy. The SHD’s expertise relating to older adults and their health, social and emotional issues, informs the research and development of the ‘Anne’ tool. Research Officer at SHD Viviane von Döllen explains:

‘In practical terms, this means active participation in conference calls and face-to-face meetings with all the various partners; contributing to all the deliverables and evaluation activities; presenting and defending the project at the CNER (Comité National d'Ethique de Recherche) to obtain ethical approval to run field trials in Luxembourg; recruit, inform, train and support potential field trial participants, as well as setting up and running field trials.’

The current project runs until mid-2020, and the SHD field trials are due to start in September 2019. SHD will implement the results of the project in one of two ways:  either by promoting and recommending the ‘Anne’ tablets, or by providing clients with the tool for additional support.

The Anne project is being financed by the FNR (Luxembourg National Research Fund). Von Döllen, who considers her work as sometimes challenging, but hugely rewarding, states:

‘Being financed through the FNR is vital for non-profit end-user organisations such as Stëftung Hëllef Doheem as without this, such active involvement would not be possible.’