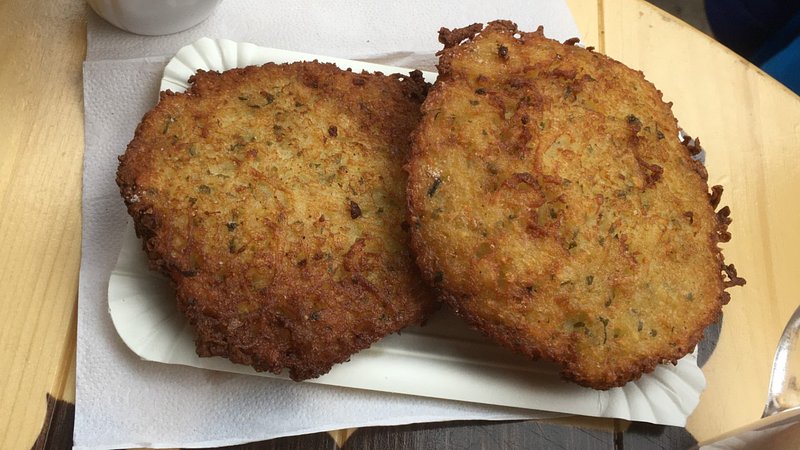 Calling it one of the greatest mysteries of modern science, a group of scientists have found that the average 100-gram Gromperekichelchen contains a full liter of oil.

Theo Guyenn of the University of Wiltz says that he and his fellow researchers made the perplexing discovery during a recent visit to a local Christmas market.

“When [physics professor] Herni Kiln finished eating just one, we noticed that the front of his coat was dripping with oil, as if he had jumped into a grease vat, and someone casually remarked that we should investigate how that was possible.”

Guyenn and his colleagues got to work, each of them ordering just one of the seasonal items and squeezing it over a laboratory beaker that, as scientists, they carry wherever they go.

“Every time it was the same thing, each 100-gram potato cake unleashing a torrent that almost swept us away,” he said. “Think of a tsunami, but instead of water, it’s grease with little crunchy bits in it.”

When presented with the findings, a customer at a Gromperekichelcher stand in Dudelange said she was neither surprised nor turned off.

“That is why I eat them,” she said, pointing down to show that she was standing in an oil puddle from a single Gromperekichelchen she had just finished. “It helps me to store enough fat to survive the winter.”

Others say that having Gromperekichelcher grease running down your chin and smeared all over your face and hair is related to a medieval courtship ritual or even a sort of prehistoric regional mating dance.

“Gromperekichelcher stands were commonplace in fancy balls of the Middle Ages, and in prehistoric times, they were like grimey swingers bars where anything could go down,” said historian Frannie Hock. “Even if they didn’t yet have potatoes, they probably used grated carrots or turnips or something.”

“And instead of hot mulled wine, they probably drank water from the Pétrusse and kept their fingers crossed that it was not laundry day upstream.”

However, not everyone is convinced that Gromperekichelcher are linked to human history at all.

“The impossible liquid-to-solid ratio lends credence to my theory that Gromperekichelcher have an otherworldly provenance,” said Weiler-la-Tour astrologer and village healer Jeannette Dicks. “They are brought to Luxembourg on asteroids, which explains why, like shooting stars, you only see them at certain times of the year.”