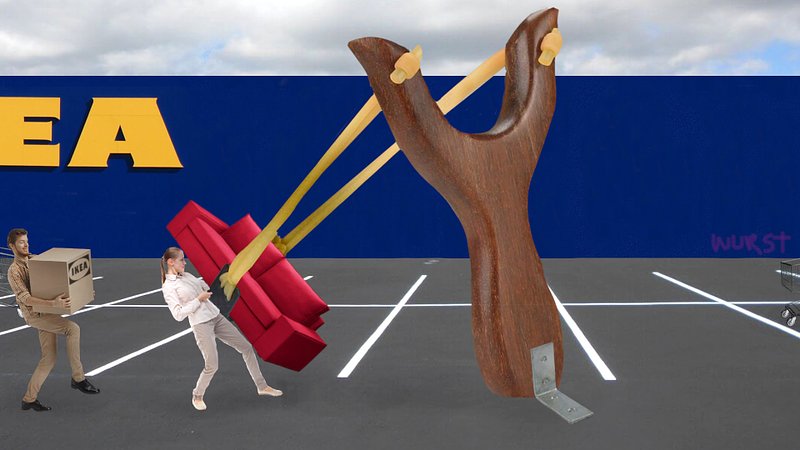 Calling it “a practical solution to a huge problem” and “a way for young customers to learn about physics” as well as “a method for shoppers to release stress after being forced to walk along a narrow 1.2 km path through a crowded space,” the Ikea store near Arlon now features a giant slingshot that will allow customers from Luxembourg to launch their purchases all the way to their homes over the border.

“No matter what we tried, people from Luxembourg always complain about how inconvenient or expensive it is to get stuff back to their homes,” said Ikea floor manager Marc Franck. “So we put our heads together to look for a solution.”

Some of their initial proposals included building a medieval-style catapult, a long conveyor belt that would go from the store to various spots in Luxembourg, and an enormous spring onto which items could be dropped and bounced in the direction of the Grand Duchy. Eventually, however, they settled on the idea of a giant slingshot.

“Even children know how to use them, and if you aim it just right, you’ll be able to send your items directly onto the street in front of your house,” he said. “If you’re really skillful, and you leave your windows at home open, you might even be able to launch your items directly into your bedroom or kitchen.”

While most customers from Luxembourg are delighted with the new tool to quickly deliver purchased items, some say the slingshot program misses the mark.

“They’ve got it all wrong,” said Hari Mendari, 24, who moved to Luxembourg four months ago. “The real problem is that we cannot even get to Ikea without a car. Apparently you need to take a train and four buses, then dart across the motorway and climb over an electric fence all while being chased by an angry Belgian farmer who orders his dog named Cerberus to bite your butt.”

In response to the remark from Mendari, which expresses a sentiment shared by many, Ikea has announced a plan to team up with Luxembourg to construct hundreds of giant slingshots around the Grand Duchy. The idea, they say, is that people may use the devices to launch themselves over the border to the Ikea store.