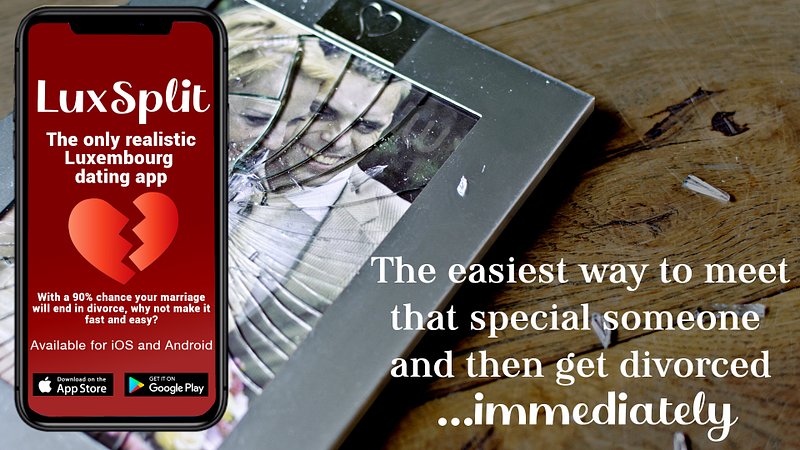 With observers calling it “a cheap and easy shortcut to the inevitable conclusion of nearly every coupling in this country,” a new Luxembourg dating app immediately directs matching users to get divorced.

“LuxSplit saves prospective lovebirds time and money while guiding them through a quick and easy divorce,” said developer Tamer Godwyn, who has also designed an app to help expats see which supermarkets are open on Sundays.

Godwyn says his app helps users to avoid getting sucked into years of ups-and-downs that never really end and lead only to bitterness, heartbreak, and a hefty bill from a lawyer.

“This app only costs 10 euros wheres the average marriage in Luxembourg costs 10 years and 100,000 euros.”

“Fill in the data form, swipe to choose your partner, and as soon as you get a match, apply online to get married and instantly divorced,” Godwyn said. “It’s that easy.”

Although the app paints a grim picture of marriage in the Grand Duchy – where the divorce rate, at nearly 90 percent, is the highest in Europe – observers say we should feel a certain amount of pride at being able to so greatly surpass the divorce rates of other EU countries.

“Like our aspirations to mine asteroids and become a European space hub, Luxembourg’s unsuccessful marriage rate is rocketing towards the cosmos,” said Jempy Dume, one of the county’s unofficial brand ambassadors who has himself been married and divorced three times and is now dating a woman from Remich whom he describes as “the one, probably.”